I occasionally get to dress up in drag once in a while. It involves putting on a tie and a dinner jacket, sometimes even a suit, and going downtown for a night at the opera with my wife. She usually drives.

It seems only appropriate that the Civic Opera House, a gloriously enclosed Art Deco box where fantasies are staged and worlds are invented, becomes a theater for the enactment of my occasional performances as a Man. Or what I imagine might look like a Man to the crowds milling about, beneath the luxurious salmon and rose-colored ceilings by Jules Guerin, the kind of Man that I so often associate with Gregory Peck, doing the things a Man does, the way he does in The Man in the Gray Flannel Suit.

Of course, Gregory Peck didn't go to the Opera in the movie, and in fact such an extravagance would have been out of place in that stark tale of post-war moral compromise, as much as a gray flannel suit would be out of place at the Lyric Opera. But if he ever did set foot, I'm sure he would look more a Man than anyone there. 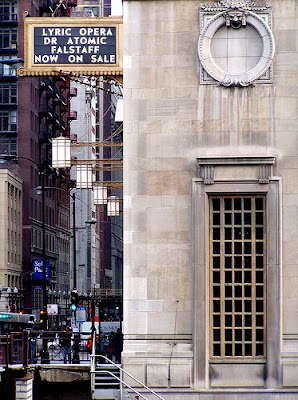 So it's always interesting when, as I'm indulging in this play-acting in a suit at the opera, being Gregory Peck and being swept away by musical tales of heroes and heroines, we meet someone and the reality comes out that I change diapers for a living.

"You mean you're not a high-power lawyer?" "Nah," I reply. "It's the suit." Not quite as jarring as a stage light falling onto the set during the closing aria, but something similar.

Unless we meet another queen-and-consort combo, which is what happened one snowy Saturday night about a month ago. Then it all starts to feel kind of natural. Up to a point.

A couple approached us, and it was clear that my wife knew the other woman. They worked together. I recognized her but had no idea who she was, and smiled at her husband, who did not look like Gregory Peck, and in fact looked kind of freaky in his heavy brown sweater.

In a sideways whisper I ask my wife, "So who is this person?" after a minute or two of chit-chat.

At that moment my play-acting took on an entirely new dimension. It was a Rorschach moment, when the hourglass stops looking like an hourglass and starts looking like two human heads. I went from Gregory Peck being a Man to Gregory Peck's wife charming her husband's boss.

"Cynthia's husband here is also a stay-at-home-dad," my wife resumes at conversational volume. We shake hands. He's affable, and looks like he has just returned from a cross-country ski expedition to the North Pole.

Three individual trains of thought then lurch forward in my mind. The first was that this fellow was not enjoying the same fantasy I was. The second was that Cynthia, I now realized, was the person who had just fired one of my wife's respected colleagues the week before.

The third was that I could learn a lot from this other at-home dad, who had been going at it for so much longer than I had. But that probably wouldn't happen, because as interesting and nice as everyone was, this dad's wife could fire my son's mom tomorrow.

It was a lot to process between the second and third acts of Eugene Onegin. I had spent the last hour or so transported to the birch forests north of Moscow. Now I realized that this consort might lose his crown, just as suddenly as things had changed in St. Petersburg on a certain day in October a long time ago.
Posted by chicago pop

Did you see Dr. Atomic? What did you think of it?
I missed it at the Lyric but hope to see it at the Met in the fall.

Funny you ask -- the answer manages to connect opera criticism with parenting, and here's how: we missed that show due to mutual parental brain death, forgetting that the show starts, as they almost always do, at 7:30. Why did both parents completely space on their season tickets and get there late?

As compensation, we went out to the Tasting Room instead and Daddy got a Spanish wine flight.