On The Business of Being Born 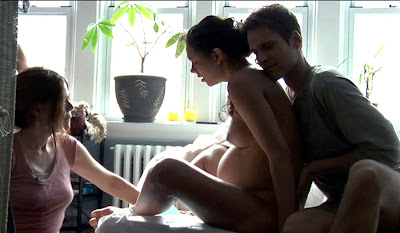 What interest do at home dads -- or dads in general -- have in a film that makes a strong case for the virtues of home-birthing?

Because I would bet that no matter what your personal preferences regarding birthing methods, watching Ricki Lake's new documentary, The Business of Being Born, is more of an education than most parents are likely to receive about giving birth. And anything that brings the father into the process, rather than encouraging him to defer to experts, is a step in the erosion of gendered parenting roles and the more respectful treatment of expectant mothers.

Which means that mothers have potentially one more advocate as they enter into the medical-bureaucratic complex of modern obstetrics.

I buy Lake's argument that at-home birthing is far more marginalized in the United States than it should be. That doesn't mean that we've had or are planning an at-home birth ourselves. We anticipate having a second child in a hospital. But we plan to have at least one midwife in attendance, an obstetrician who is comfortable with this, and a doula for the postpartum recovery period.

All of which is to say that, despite the moderately polemical nature of the film and response to it, the issue is not black and white. It's not either the hospital or a bathtub in the living room. What is most significant about this film, as I see it, is simply its success in raising awareness of the way birthing methods have been shaped by various competing interests, and not always in favor of women and their children.

Birthing, and modern obstetrics, is an industry -- like agribusiness, transportation, or energy. It makes sense to understand how this fact might impinge on the ways women's bodies are manipulated during the birthing process.

So what does this have to do with dads?

Science has for centuries been a male activity, medicine included. That has changed only in recent decades. Men have made science (with notable and often unacknowledged female contributions), and men have typically deferred to science.

It's the deferral part that causes the problems for the mother. It's easy when medical experts say that things are under control for dad to go sit in the waiting room and live out the old stereotype of the nervous father waiting to pass out cigars. This deferral has helped to legitimate the substitution of a series of medically-managed manipulations for the extremely complex and self-regulating process of human birth.

The increasing medicalization of the birthing process has been accompanied by a rise in the rate of cesarean sections in this country to just over 30% (15-20% higher than the rate in peer countries), with all the increases in risk that accompany a major surgical intervention of this sort. Lake's film makes the argument that many of the most common practices of hospital-based obstetrics themselves contribute to the chances of a delivery going cesarean, from the reclining position of the mother, the use of pitosin, epidurals, or whether a mother begins labor at the end of a shift when staff are eager to go home for the day.

These self-aggravating circumstances are avoided in a home-birth environment, or in a hospital situation in which the mother has sober and well-informed advocates at her side. A midwife is one such advocate. A dad should be another.
Posted by chicago pop

Did any of the Daddy Dialectic dads have home births with their wifes? I think the concept of natural child birth is great, but I agree with ChicagoPop. I think if I was having a child, I'd want to be at or near a hospital in case something did go wrong--natural child birth with resources close at hand.

How do the Daddy Dialectic dads feel about routine infant circumcison?

Indeed it is not about where you birth, but about how you birth and the conscious choices the mother and her partner make about birth. What is important about Lake's the BBB, as you articulate, is disseminating the reality of the birth industry and empowering parents to make informed decisions. I (a doula and avid reader of your blog) applaud you for your birth choices & for your insightful commentary here.

My experience was that I had NO real say about what was going on in the birthing room at the hospital. The Dr. is caring for my wife, and she makes the call -- not me -- for all of it.

As I understand it, the only person who can make the call about anything in the hospital is the mother. If the Dr. takes over, the only legal basis for this is the informed consent of the mother. Whether this informed consent is fully and freely given in most hospital birthing situations is open so some debate, as Lake's film points out.

One role of the father or birthing partner, then, is to help the mother decide, before entering the hospital, how far they want to turn things over to the OB and then to help stick to this plan once in the hospital: no, we don't want contractions to be induced if mom haven't dilated to XX cm. in two hours of commencing labor; no, we don't want an epidural the moment labor begins, etc., all of which keeps the mother more in direct control of her body in the process, and holds off the possibility of things going the route of an unnecessary cesearean (which account for roughly half of the total number).

So the mother and the father/partner need to have an understanding going in to childbirth as to what kind of labor they want, how much pain to expect, what procedures they will allow at what point, and be willing to resist some possible cajoling on the part of the OB and staff (i.e., "Do you want to let your baby die?" or, "I'm going to use a vacuum now because you're not having enough contractions.")

I'm a new reader, but yeah, my second daughter was born at home. (The first part of her birth story is here, with a link at the bottom of that post to part two.

Our first kid was born at a birthing center that later closed, so homebirth was really our only option for a midwife birth the second time around. It was an amazing experience, our older daughter was able to participate, and we felt extremely well cared for medically all the way through.