IT'S A BATTLE OF RELIGIOUS BELIEFS WHEN A LIBERAL CHRISTIAN CAREER MOM WHOSE STAY-AT-HOME HUSBAND COOKS AND CLEANS SWAPS LIVES WITH A CONSERVATIVE CHRISTIAN HOUSEWIFE WHO OBEYS HER HUSBAND'S EVERY COMMAND, ON ABC'S "WIFE SWAP"

This week on "Beckman-Heskett/Childs," a theologically liberal high powered corporate executive mother with a stay-at-home husband swaps lives with a born again Christian mom who believes women are created to be men's help-mates, on "Wife Swap."

Each week from across the country, two families with very different values are chosen to take part in a two-week long challenge. The wives from these two families exchange husbands, children and lives (but not bedrooms) to discover just what it's like to live another woman's life. It's a mind-blowing experiment that often ends up changing their lives forever.

Kim Beckman-Heskett (42) of Colorado is one of only three female vice presidents in her company. She works while her husband, Randall, stays at home and takes care of all of the chores, cooking and cleaning. A former preacher, Randall is now a self-professed modern Renaissance man, artist, poet and mystic who speaks 12 languages and possesses masters and PhD degrees in religion and theology. He is still a man of faith, but is skeptical of others he calls "bible thumpers" after 30 years of preaching and witnessing religious fundamentalism. Both Kim and Randall are devout Christians, but strongly disagree with literal interpretations of the Bible. They have a liberal approach to their faith, and Randall often incorporates humor in his beliefs and prayer. Kim doesn't believe that women should stay at home, "barefoot and pregnant," and encourages daughter Allison (12) and stepdaughter Hannah (12) to follow in her footsteps. The girls aren't required to do chores and are exposed to dating.

Kim travels to Rhode Island, where the Childs are born-again Christians who interpret the bible literally and use it as a guide for life. In the Childs' family constitution, God comes first, husband Christopher comes second. The family have to serve God at all times with a cheerful heart, and they follow the words of scripture to the letter. Lee-Ann is a stay-at-home mom who home schools her children, Laurie (18), Chrissy (18), Coburn (16), Columbia (12), Daisy (10) and Cambria (2). Christopher is an ultra traditionalist father who is head of his household and calls himself the "gatekeeper," setting the rules, enforcing discipline and expecting cheerful obedience. The children all must do a five-minute power clean before Christopher gets home from work. Mom is molding Coburn to be the man of the house so he can provide for a wife and family. As for the girls, she's training them to be stay-at-home moms who will live out God's calling in marriage and motherhood. Dating is not allowed for any of the children. Instead they pray daily for God to send them a spouse when the time is right. Lee-Ann is happy to be her husband's "help-mate," and says that women are the weaker link. The children feel it's ok to be at home as they feel safe, sheltered from the corrupting influences of the outside world. 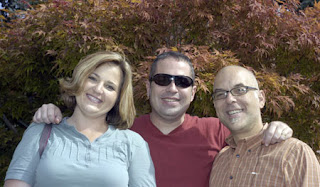 Haven't seen the episode (don't own a TV!), but from what I've gleaned from the blogosphere, each family came away with strong feelings of disgust for the other. This reminded me of another second-hand description of Morgan Spurlock's 30 Days, which had a Christian fundamentalist mom join a household of gay fathers for a month. That's the happy trio above.

My friend Jodi (a fan of 30 Days, which, similar to Wife Swap, specializes in putting social opposites together) says that participants normally come away with newfound respect and compassion for people different from themselves. Not so with the Christian fundamentalist, according to Jodi: She left the gay dad family with her prejudice intact.

"Part of what’s so fascinating about this episode is how this woman, who is clearly neither stupid nor insane, can hold two sets of absolutely contradictory views: that foster care is terrible for kids and that Dennis and Tom are fantastic parents, but that all gay couples, including Dennis and Tom, should not be allowed to adopt, forcing more kids into foster care," writes the entertainment site AfterElton.

I know from a great deal of empirical research that evangelical families are much more flexible on the ground about gender roles that we might expect, with many stay-at-home dads among them--nothing gives me more hope that gender egalitarianism is the wave of the future.

But "evangelical" is an umbrella term that covers a lot of different traditions and variations. There is definitely a hardcore of believers who will never accept non-traditional gender roles or the gay and lesbian families in their midst, no matter how much contact they have with each other or what evidence suggests the parents are doing a good job.

Has anyone seen these episodes? Care to comment?
Posted by Jeremy Adam Smith

HI! First comment here, I think, in a coon's age. Our second kid is just becoming old enough for me to be bold and return to my pre-2nd kid to do list, which included active participation at this fine venue. (!)

I haven't seen the episode, and am quite curious, since I spoke for some time with the Spurlock rep who was scouting the queer families in which to consider placing the guest. They wanted someone from outside the Bay Area, essentially. Or at least our profile didn't fit. I wasn't all that convinced I would be up to it anyway, but had been recommended to the scout and was willing to entertain a conversation.

I'm sorry to hear of the outcome, though. Kind of pokes a pin-hole (hopefully not much more than a pin-hole) in my delicate little balloon of optimism around the possibilities we have for changing one anothers' hearts on this issue.

What is a "coon's age"? Ninety years for every human year?

That's amusing that Spurlock's people talked to your people. I think your optimism is well-founded--hearts have changed. I run across stats all the time that indicate a lot of progress--this morning I saw one (from the General Social Survey) that showed the number of people who think gays and lesbians shouldn't be allowed to teach at the university level declining dramatically since the early 70s. Of course, it's frightening to think that there's still hardcore homophobes out there who think GLBT folks (did I get all the letters in that acronym? seems like new ones are always being added) should be fired. The good news is that those people are now outnumbered.

This stay-at-home dad Randall in Colorado makes me feel like a total loser. Twelve languages? A mystic and a poet? What am I doing during my son's naps? Time to ramp it up!

I found the show interesting because as a mainline ordained minister, in a denomination that would be considered liberal by the conservative family, it shocked me how arrogant the doctor of theology was. In the first place he corrected her Greek, and I looked it up during the break, because it sounded funny to me. He was wrong in both pronunciation and definition. His statement on the Wisdom literature I doubt would be supported by any mainline scholar, and flies in the face of numerous sections in that literature that are anti-syncretistic. The only purpose it served was to end an argument by adding a new level to the text that I would say is alien to the author. He loved to drop his degree, with such pride, and even looked down upon the woman, and said he knew she could not come up to his level he would have to go down to hers. And when challenged, as opposed to all the PhD's I know who like a good question he went into his bedroom in the fetal position crying. The languages he claimed to speak, NO ONE SPEAKS, not even a PhD at Hopkins in semetic languages speaks some of the ones he listed. (A few are read by a large number of scholars, but some only have maybe two or three people in the world who would claim profecency.) If he is so accomplished why no publishing, why no teaching even part time? I doubt his doctorate was in semetic languages, scripture or even theology, more like a DMin. (Basically a terminal seminary degree with two years more on classes discussing how you feel and how to minister to people. Like CPE.) Oh and if you wish to say but I heard him reading another language. (You can do that in the first term of a semester of Greek. I saw one scholar get a guy able to read Greek text within 2 hours, and he had never seen it before. DID HE TRANSLATE THE TEXT.) If he knew Greek so well why did he correct her on a simple word, when he was wrong? (I have four degrees in theology and I don't curl up in a fetal position when someone asks me a question.)

Oh and I do think the evangelical family is odd, and the idea that the man has work and woman stay at home is mainly a cultural one, and has little reference to us in the first world. (If those daughters don't date how will they marry.)

My husband and I love to watch WifeSwap, and this is the one episode that always sticks with me...mainly because of the children from the more conservative family. I understand that all of us are in our own lives and what works for one family, might not work for another. However, I became increasingly frustrated by the father of that family. I truly felt he was imposing a level of brainwashing. The only reason I say that is he controlled his children with fear. Fear is a powerful tool that can be used to control others. Fear of going "against the family," fear of the devil, fear of whatever. However, fear is the absence of love. Why teach these children to be afraid of viewpoints and perspectives other than their own? Teach them to embrace and learn from others. Teach them to love themselves for who they are and who they are meant to be (whatever that may be!), not who you think they are supposed to be. However, I believe we are all here to learn and I have no doubt these children planned to have this father and mother so that they could learn specific lessons. However, I believe in empowering children to be everything they want to be. I truly believe we can do anything we want. What we need to question is when those around us are controlling us with fear. I truly try not to pass judgment on that father, however, when it comes to negatively controlling the mindsets of children, it really rubs me the wrong way. Especially when the youngest daughter, Columbia, finally began to see things more openly. You could see the father began to panic. He was losing control and had to get it back. How? With fear. Those poor children. My heart goes out to them. I send them love, and my prayer for them is that they gain strength through these experiences. I also pray that they listen to what is inside of them. If they want to be a stay-at-home mom, by all means, do it. But...please...do not do this because you think "this is what your supposed to do." What you are supposed to do is be true ALWAYS to who you are. That is what we are here to learn. Your gut will never lead you astray.