Did you know that half of workers don't have a single paid sick day? There are no state or federal laws that require employers to provide paid sick days.

Well, you can do something about it without leaving the ergonomic comfort of your keyboard. Join the Online Rally for Healthy Families! You can share your sick-day story and send a message to Congress to pass the Healthy Families Act, which would establish a new standard of seven paid sick days per year for workers to recover from their own illness, or to care for sick family members.

Barack Obama didn't have a dad, at least not the way I think of it. He says as much in his autobiographical writings, about how an absent father left a hole in his life that he tried to fill in various ways, more or less successfully, until the sense of always being somewhere in between led him to Chicago. It was here that political work in a black community solidified his personal and political identity.

I think about all that as I walk around my neighborhood. It's a relatively well-integrated island on the black side of one of America's most segregated cities. Obama's newfound celebrity has lent a mythical aura to the humble local landmarks that make up his Bildungsroman, many of them just down the street, like the barbershop on 53rd (since relocated), a unique institution in African-American political culture, or the public school gymnasium across the way where he voted for himself in the Illinois primary.

Most folks aren't as open as Barak Obama, and even in this neighborhood it's still challenging to talk about race. But it's something that everyone is aware of, and everyone registers in the back of their mind. In my daily interactions as a dad in the neighborhood, in my own barbershop, on the street, across the fence, I sometimes get the impression that lugging my son around and taking care of him in public is a symbolic act of tremendous emotional power in ways of which I am unaware.

Seventy-nine percent of African-American children are born to single mothers. To see a dad around, of either race, a young dad, during the day, is a dramatic contrast to that brute fact. I get a lot of looks on the street, and sometimes it makes me self-conscious.

It's clear that there are a lot of emotional holes out there. A few black men have told me as much. "My father wasn't around much," Denzeel told me one afternoon at my salon, before bending over to make funny faces at Spot, and sending him off with a Matchbox car. The crisis of black fatherhood is a well-known statistical fact. It's been at the center of social scientific attention since the birth of American sociology in the studies of the American ghetto. But the sociology seems irrelevant when everything around you is telling you the same thing.

There's a gulf there, no doubt about it, and I haven't begun to explore all the possible meanings of that gulf across the racial experience of fatherhood, let alone fully cross it in an interpersonal way. Perhaps the strongest responses I've received have come not from black men, but from black women, who have been the most warmly sympathetic and supportive of my role as primary caregiver. We usually have a lot to talk about.

Barak Obama the man gives people a sense of hope in a way that I have never experienced in my lifetime. There are a lot of reasons for this phenomenon, and not everybody buys into it. But, as a father, I think I know at least one of them. It comes from things like taking a seat in my pediatrician's waiting room the other day and seeing six black dads with infants in their laps, with no moms in sight. It comes from riding a crowded, lurching bus home one night, and sitting behind a young black man, in every appearance the image of a gang-banger, quietly holding a 3-year old girl as if she were a priceless piece of family china.

Obama's candidacy, no matter where it winds up, seems to give a focus to people who see these things and others like them, and wonder if they really can be the shape of the future.
Posted by chicago pop 18 comments:

radical parenting: a reading and discussion with 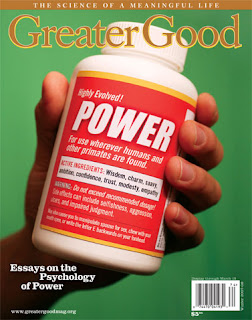 The new issue of Greater Good (the magazine I help edit) is up and this time the essays focus on the psychology of power. Of possible interest to Daddy Dialectic readers:

The Power Paradox: True power requires modesty and empathy, not force and coercion, argues Dacher Keltner. But what people want from leaders—social intelligence—is what is damaged by the experience of power.

Power Sickness: Feeling powerless is bad for our health, reports Eve Ekman. What can we do about it?

Playing with Power: Jason Marsh reflects on an educational classic.

Plus: Supernanny sends a tough message to parents, but does it really help? and What do healthy urban neighborhoods look like?
Posted by Jeremy Adam Smith 2 comments: