This coming Sunday the 18th, starting at 2 pm PST / 5 pm EST, I'll be hosting a Firedoglake Book Salon for Naomi Cahn and June Carbone and their new book, Red Families v. Blue Families: Legal Polarization and the Creation of Culture:

Red Families v. Blue Families identifies a new family model geared for the post-industrial economy. Rooted in the urban middle class, the coasts and the "blue states" in the last three presidential elections, the Blue Family Paradigm emphasizes the importance of women's as well as men's workforce participation, egalitarian gender roles, and the delay of family formation until both parents are emotionally and financially ready. By contrast, the Red Family Paradigm--associated with the Bible Belt, the mountain west, and rural America--rejects these new family norms, viewing the change in moral and sexual values as a crisis.

This political perspective on the family is a big part of my book, The Daddy Shift--a fact that puzzled, and perhaps alienated, some of my readers. Everything in the book points to the last chapter, which argues that the "daddy shift"--the expansion of good fathering from pure breadwinning to include caregiving as well--necessitates a shift in law and public policy. I end the book by asking dads who have made the private shift to help make that public shift happen, to allow their caregiving experience to drive their political participation and inform their votes. 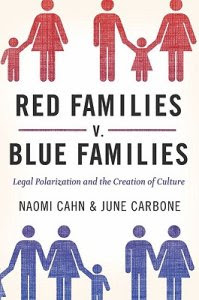 Of course, some folks would have preferred that I stopped with the (genuinely moving and complex) stories about stay-at-home dads and breadwinning moms. But since finishing The Daddy Shift, I've come to feel even more strongly that a specific political agenda flows from the emergence of what Cahn and Carbone call "the Blue Family Paradigm." We need policies, such as paternity leave and flextime, that will help us to be the fathers that we want to be.
Indeed, Red Families v. Blue Families makes a very compelling, research-tested case for the idea that the kind of family you're in is tightly linked to where you live, how much education you have, what you do for work, how much money you make--and how you vote come election time.
Does that sound unlikely to you? Well, I hope you'll join us this Sunday the 18th--you'll be able to put your toughest questions directly to the authors of Red Families v. Blue Families, who will be on hand to answer. The book salon will be the top blog entry at Firedoglake from 2-3 pm PST / 5-7 pm EST, and you'll be able to participate by posting comments.
Posted by Jeremy Adam Smith 4 comments:

I am spending today at Design 4 Resilience at the Berkeley Hub (watch the livestreaming here)—and so I’m thinking a lot about resilience. Specifically, family resilience.

My book The Daddy Shift

is about how families have evolved so that both moms and dads have capacities for both breadwinning and caregiving. This is a radical departure in the history of the American family, where men traditionally specialized in providing and women specialized in care.

As a result, men had lots of economic and political power and women had relatively little; women developed powerful communication and emotional skills while men’s development in these areas was stunted. (Naturally, the full picture is more complicated than that…but you’ll just have to read the book if you want to understand more.) If a father died or abandoned his family, his wife and children would fall into poverty; if the mother disappeared, the children would quite often be separated from the father, to be cared for by female relatives or, in certain cases, an orphanage.

We’ve tended to view the rise of women’s public power through a profeminist lens—in other words, through the lens of fairness and equality for women. This is the lens I use in The Daddy Shift. However, in the course of my research I discovered that there is another lens through which we can view the recent evolution of the American family, that of resilience.

When reporters ask me why stay-at-home dads have emerged over the past two decades, I always reply that a) women went to work; and b) lifetime employment went away. The former trend reinforced the latter. Employers feel no loyalty to employees; in fact, disloyalty is rewarded—when companies lay off employees or managers fire people deemed nonperformers (e.g., a new mother putting in too much “facetime” at home and not enough at work), their value in the marketplace can rise. My grandfather had the same job for forty years, driving a crane at a quarry; over the past eighteen years of my working life, I have had more jobs than I can count, including two stints as a freelancer. We Americans now live in a culture of mobile, mercenary instability, and many of us are proud of it.

As a result of this growing mobility and instability, sole male breadwinners lost a tremendous amount of economic ground; today, for the first time in Western history, women as a group are more educated than men and women are on the verge of passing men in the workforce. Men lost the ability to reliably support families. And families, I discovered, have responded by diversifying. Men have developed emotional and interpersonal skills; women have gone to school and to work.

You can see this illustrated in Corbyn Hightower’s Shareable.net diary of her family’s efforts to survive the Great Recession. Corbyn and her husband started off as a dual-income family; her husband became a stay-at-home dad after their third child was born. Then Corbyn was laid off and her husband went back to work, albeit at a low-paying job.

This is a family facing a terrible economic crisis, but Corbyn’s diary simultaneously reveals a tremendous amount of stubborn resilience. Theirs is a family that embodies many of the characteristics of resilient systems, from redundancy to flexibility to transformability. You can also see this dynamic at work in the two-decade story of Anita and Brad, which Shareable.net published on Thursday. These resilient characteristics are not confined to Blue State families; as I document in The Daddy Shift, religious, conservative families are also adopting flexible gender roles.

So far, I’ve talked about family resilience in the context of the lone American families; mothers and fathers in isolation, modifying their nuclear family structure in order to cope with economic shock. But some families are also responding by trying to embed their nuclear unit in larger communities—extended family or urban tribes. In fact, Corbyn’s family moved from Texas to California to be close to the co-mother of her first child (Corbyn is bisexual)—in effect, the family now has three parents, which some research suggests is the ideal number of caregivers.

Like the growth of family egalitarianism and diversity, this is a phenomenon that crosses political boundaries—cultural conservatives have built church, family, and neighborhood networks to nurture their idea of the traditional family while Blue State progressives have engaged in secular versions of the same project.

In this regard, families, both Red and Blue, are trying to build their resilience to trying to rebuild much older family forms that are more networked, more modular, more redundant, more diversified, more shareable.

But the history behind these efforts is extremely problematic. The “traditional family” imagined by conservatives is oppressively patriarchal—it is other things as well, but in general the traditional family movement is focused on putting heterosexual men at the top of a familial, social, and economic pyramid.

More politically left-wing and communal efforts to reshape the family have been equally screwed up. As I write in The Daddy Shift:

Take the kibbutz movement. Early Jewish settlers in Palestine made children a communal responsibility. Babies slept outside the home, side by side in dormitories.

“This experiment failed the test of reality,” writes Israeli sleep researcher Avi Sadeh. In a study that compared a kibbutz that still kept this “children’s house” sleeping arrangement with other kibbutzim in which babies and young children slept in their parents’ homes, researchers found that “children who slept in their parents’ houses tended to have longer continuous periods of sleep than those in communal sleeping situations on the kibbutz.” They also found “that the kibbutz children’s sleep improved greatly after moving to family sleeping arrangement.” As a result of this dynamic, kibbutz children’s houses declined and have almost disappeared.

“Our cars are a perfect example of socialism,” says a founder. “Nobody owns them, so we treat them like shit.” If children are defined as a collective responsibility, will they be treated like cars on a commune?

Movements to reshape the family along communal lines—which quite often sought to separate children from biological or adopted parents (largely on feminist grounds)—missed something important, something that decades of psychological research have established beyond a shadow of a doubt: children need to feel safe and protected by their caregivers, and that is what builds their resilience, their ability to overcome challenges and bounce back from disasters. Secure attachments to parents give kids a model for caring relationships that they can later apply in adulthood.

To many people, this will sound like common sense, but "common sense" is a construction, not a given. Many of us have reached a place where people (both academics and regular folks, using different languages), are acknowledging the importance of both the parent-child bond and of extended networks to fostering resilient families, along egalitarian lines. But as I write, this is a theory for most people, not a reality. Establishing psychological attachment and egalitarian relationships is hard, but achievable within individual lives; re-designing our environment so that men and women are more equal and families are more networked and nurtured is, to say the least, a much longer-term process.

A few weeks ago, I was discussing the ideas of robot designer Rodney Brooks with the science-fiction novelist Paolo Bacigalupi: Brooks argues that resilient robotic systems are small, fast, networked, and numerous, individually dumb but collectively smart. I told Paolo that this is an interesting model for how humans are facing social change right now, each one of us groping across a strange landscape, each of us discovering a piece and communicating what we are learning through the Internet.

“Yes,” Paolo replied, “but you have to get the human robots to care about each other.”

Robots can be programmed to “care,” in the sense that you can create communication protocols for them. Humans learn to care, developing a theory of mind and a sense of empathy as they grow. Designer George Kembel, I just learned here at Design 4 Resilience, has argued that empathy, which he defines as the ability to perceive and meet latent needs, is an essential building block for resilience (see video at bottom).

But it seems to me that resilience thinkers rarely stress this critical idea. Can we design our society so that we are more likely to care about each other? I think so. But no master designer will be able to do it. This is a design that we collaboratively create as we go, through an accumulation of acts and decisions. You can start right now.