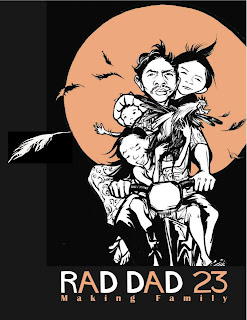 Patchwork Family
Reflections on divorce and the passing of time

We understand the world by how we retrieve memories, re-order information into stories to justify how we feel.
Stephan Elliott

My story technically begins on June 5th 1969.  The day of my birth.
I used to try to recreate the particulars of that day in my mind.  Here’s what I’ve been told: my mother in the hospital, alone.  My grandparents waiting in the hall beyond the delivery room doors.  My father hundreds of miles away finishing up the last few classes of his junior year in high school.
No matter how I tell it, it feels like such an incomplete story, so instead I search for other beginnings.
Perhaps the story begins nine months earlier.
But the story of my conception is something I have to invent.  I imagine asking, ‘mom, do you recall the weather on the day you and my father created me?  What were you wearing?  What time of day was it?  What did you feel like moments after?’
Awkward.
So instead, I tell it this way: in northern New Mexico, mid-September, it can be hot, the final clutches of summer, or it can be brisk, the first punches of fall knocking summer into memory.  It was late in the evening.  The sky clear.  There is a lake just outside of town with picnic tables.  Let’s say, it happened there.
Why should I ask my mother? It’s my story after all.  Do I want to know her answers, her version of the story of my origins?
Maybe she can’t remember details because they were like bunnies, one hot tryst blending into another.  Maybe it was an ugly experience for her, fraught with guilt, shame, coercion; perhaps my origin is a regret she still bears, perhaps it was an accident.
So I rewrite and reinvent the facts, the narrative, but no matter how I tell it, I can’t avoid certain outcomes.  I was born, my father was absent, my mother eventually left the state and his family behind.
Somewhere in all that, my story starts; it’s what leads to the story of my family now: three kids, an ex-partner, some great years together, some painful ones, some regrets, some anger.  But there’s more to it than that.
I tell stories to try to make sense of it all, to explain how we got from there to here.

There is a scene in the movie Beasts of the Southern Wild, in the midst of some revelry during the storm, the father leans back and looks at his child sitting off to the side, watching the adults play, and he asks: ‘did I ever tell you the story of your conception?’  It seems clear that he has, many times, but the child looks on waiting for the story, eager. You can see it in her eyes.
My children get that same look.
Their mother and I have been separated for years now.  My youngest child probably remembers little of us together.  The way we used to love each other, the way we cared for each other.  I asked her recently if she did, and she shook her head no and then asked me:  ‘do you?’
It was a strange question I thought, but then, I realized the profundity of it.  For me at least.  Do I remember?
I do.
I used to believe I told the stories of my children’s beginnings for them, so they could know where they came from, that though their family has changed and evolved, they were always loved, fiercely and without question.  But I tell these stories for myself as well.

Ella, you were born so quickly I barely had time to cry.  Your mother wanted the Cadillac Birth, she boasted months ahead of her due date.  After two natural births, she wanted to get the drugs!  We’d high-five each other.  What the hell could I say; I simply tried to be supportive.
We waited to the last minute to prepare for your birth.  In fact, it was on the day of our hospital tour, your mother noticed weird contractions; she assumed it was just Braxton-Hicks or something.  Eight hours later we were back in the hospital, being wheeled into the delivery room, and it was then she was told she was too far along for drugs; you were coming.
And you did.  It wasn’t until I held you and touched your cheeks that I cried.  And you joined in as if on cue, screaming and crying with such determination and anger, a lot like how you are today.

We sit all the kids on our bed one night in September.   It’s there we tell them their mother will be moving out in a few weeks.  It’s then we explain our family will be changing dramatically.  Life will be changing.  Our son nods like he understands.  Our middle daughter just sits there.  Our youngest immediately starts crying.  Then we all do.  It’s the first and last time we all cry, together, as a family.

After my mother found a place to live in another state, after my brothers and I started new schools, after we struggled to fit into our new neighborhoods and make new friends, my mother one night handed me the phone; it was our father.  We hadn’t seen him in a few months.  He told me then that he would not be moving in with us like we were promised when we first moved.  He was going to remain thousands of miles away in Hawaii but he’d come visit soon.  My mom stood off to the side and couldn’t really look at me.  I passed the phone to my younger brothers.  I walked to my room trying not to cry.  It’s all I really remember.

I have told this story many times before.  But it bears repeating.  Making family is not something that just happens.  It’s a choice; it takes intention, dedication, perseverance.  I sat in my car idling at the first intersection I came to on my way to get food for my girlfriend who was back at our house trying desperately to breastfeed our first child.  She was twenty.  I was twenty-one.  Somehow that is important.  Perhaps it explains why I sat there wondering what to do.  Perhaps sitting there, I thought of my father and the distance there always seemed to be between us.  Perhaps, I remembered my mother’s face as I left her room that night, her look of anger and shame at not telling us the true story of our family’s break-up until it was too late, her silence her only apology.  Perhaps, I thought of the look on my girlfriend’s face right after our son slid from her body, the wide-eyed look of a person who just discovered the answer to so many things.  Whatever it was I thought of, I decided then, right there, that I would not let my fear of fucking things up prevent me from trying to make this family work.

We gathered all the kids together in their mother’s new living room.  Her face a mask of apprehension and fear.  I choked down my anger at feeling left behind, at the fear that my family was breaking.
Families don’t break, I told myself. Over and over.
I gathered them together.  I put a candle in the center of us.  I asked my partner, the mother of my children, the woman who was now choosing to start something new, to light her match, the long stemmed strike-anywhere kind.  Then each of the children lit theirs, and then I did.  We all lit two candles, one for her house and one for mine.
By the candle light I could see the kids’ faces, both sad and unsure, but in the orange glow, I could see they felt safe.  We all looked at each other and then blew out the matches.

This is my story.
I was born on June 5th 1969.  I am a father of three.  But there is more to it than that.
I have a large extended family, a network of friends and a loving girlfriend.  I’ve learned now that family is not static, not limited to one or two or ten possibilities; family is nebulous, shifting, consensual.  It’s difficult, can hurt, can push you out of your comfort zone.  Family is the stories we tell to give ourselves roots, to make connections, to foster new possibilities. It’s a patchwork quilt, a collage of hushed conversations, a montage of fading memories.  Family continues to grow and change.
Here’s an example, a new story I am working on.
My son decided to leave, needed, I think, his own space from his mother and his father.  He lived a year in NYC and now has returned to his own apartment in west Oakland.  We hang out weekly, sometimes sharing a beer, sometimes eating a meal, generally talking about the Oakland Raiders, but slowly we are moving towards more personal, difficult subjects.  I am trying to close the distance between us.  I want to ask him what he remembers of his youth, of the way our family used to be, of the way it is now.  What all these things mean to him?
I want to hear his stories.
Just as, someday soon, I hope to hear my daughters' stories, who will be embarking on their own journey in a few years.
In fact, I can’t wait to hear the stories they tell of what family means to them.  And just as I have my own story, the stories they tell will be their own.
I’m sure their beginnings and endings and what it all means will be so different.
And shocking.
And surprising.