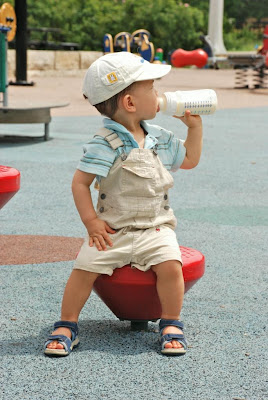 The other day I decided that I have a favorite playground.

After a six-month study of a dozen neighborhood parks, in which the research subject (Spot) was strollered up to the recycled, consumer-product extrusion that is the modern playground -- beds of wood chips walled in by recycled milk-jug bricks, and springy pads made from discarded tires -- our subject was dumped to earth and allowed to roam, all while dad found a shady bench where he could search out a few stray moments of inner equipoise.

So after watching Spot fall on his face in this park, and then fall on his face in that park, it's a nice feeling to have picked a favorite place for Spot to injure himself. It's not big, it's not full of new stuff, and it's not the closest park we could go to. It's surrounded on 2 of 3 sides by unfinished brick walls and creaky wooden back porches, and the third side is a fenced-off alley. There's more concrete than grass. Usually it's empty, and it's not full of mommy groups. But Spot and I have had some good times there. It was at this park that Spot got his first wave of recognition, from a little girl named Briolla, who like Spot was blissfully unaware of the late-morning turd that was then in his pants.

Maybe there will be a mom there, or a dad, or someone's cousin watching the kids, a nanny or two, but there are always more kids than adults and hardly ever any teenagers. And hardly ever any parents introducing kids with names that piss me off, like Blaise (pronounced ˈblāz, not blez), Itaxaso, Trevelyan, or Dante. To me, all this makes it perfect playground.

But even more than these qualities, the best thing about my favorite park, the one that really sets it apart from all the rest, is its location across the street from an in-home day care facility that, every day around 11AM, unloads a chirping, hopping, wobbly, and incoherent mess of toddlers into our midst, storming past Spot in a dusty cloud like some great prairie herd. Tre, Cole, Sam and Briolla are the ones I've come to know by name. Most of them can talk more than Spot, but they're not put off by his enthusiasm for standing his ground, pointing up, and crying "Bah!"

It's an instant peer group, complete with one potential love-interest, and to me it's like a free ticket to the zoo. I've realized why this works: Spot gets to interact with a lot of toddlers, without me having to interact with their parents. Or, to put it differently, the ratio of toddler-to-parent interaction is relatively high, which is good.

At first I viewed the playground scene the way I used to view the bar scene in the glory days of my bachelorhood. Lonely and want a date? Go to the bar and scam for chicks! New parent and want friends? Go to the playground! At-home-dad and feeling the social weight of your statistical rarity? Go hunt down a stroller dad at the playground!

"Hi, I'm Brad," the conversation would go. "I see you have a child and are caring for him during the working day. So am I. Let's talk about stocks."

Well, I've had about as much luck and pleasure scamming for parent-friends at the playground as I did scamming for chicks at bars. I quickly discovered that approaching the playground as a pick-up scene for at-home parents was a non-starter, unless, as with the bar scene, you come as a group. But then how do you meet anyone, and what's really the point?

I spent enough time worrying about that stuff in my 20s. I don't have to worry about any of it at my favorite playground. As I monitor Spot obsessively marching back and forth across his favorite crack in the concrete, or discover a piece of plastic detritus and marvel as if he had found the largest diamond in the world, I wonder if we've timed our visit so that we'll see the toddler herd today, and if I will get to watch them swerve around Spot the way freeway traffic elegantly swerves around a refrigerator fallen into the middle lane.

If they come, then I get to watch the next stage of Briolla's unfolding romance with Spot, and race around the jungle gym with the rest of the herd.

If they don't come, then we can happily march up and down the steps, or go back to the favorite crack, and I can occasionally look at the wind in the trees, which I like to do while they still have leaves.
Posted by chicago pop

Trevelyan is the name of the English oppressor in the classic Irish Republican Army anthem "Fields of Athenry".

Yeah, Trevelyan is an evil name, isn't it? Wasn't aware of that reference. IRA anthem. Wow.

Sorry to hear it CP - children are great but they're going to turn into adults, and hopefully Briolla and Spot will still want to bond when that happens. I hope at least that much for mine. I never did the bar thing, but as a side effect of efforts to model friendship/community-building skills for my boy, I have met all my best parent friends (of both genders) at the playground or places similar. And I really appreciate that those other parents are looking after my child when he's on the far side of the play structure as I am theirs.

Mei-
Thanks for the condolences re: Briolla. As it turns out, after the cold shoulder from Briolla, Spot sat down between two other girls, and they started comparing wood chips. So now he has 2 girlfriends instead of one. There are worse trades, unless it's really Sam that he's after.

Anyway, just for the record, I don't hate other parents. Children are indeed a huge, almost universal link of common humanity between strangers, and I experience it all the time.

As far as preferences, tho', I'd have to say I prefer the sidewalk to the playground, or even the rocks at the edge of the lake. I suppose we could build an entire metaphysical superstructure on this difference, and nothing beats a sweaty hour on the jungle gym, but pretty much everything I could think of modeling to Spot comes up on an afternoon walk around the block.

Except the herd. Which is why we go back to the playground.

too true. it's just like being back at high school sometimes. i too often find myself doing the kid thing and not dealing with the adults. Not that I can't or won't if they're friendly...but I get so bummed since so often they're not. the ones that don't know how to play.