On the Love of Small Things 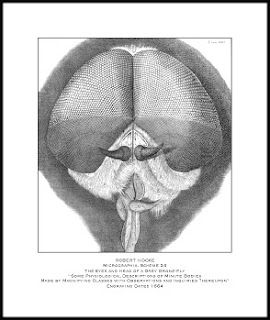 In the same year that Isaac Newton invented his own version of the differential calculus (1665), Robert Hooke published a a book illustrated with engravings of Very Small Things, including most famously the eye of a fly. The domain of the calculus was an abstract corroboration of the infinitely large and infinitely small worlds being disclosed by seventeenth century optics -- the telescope and the microscope.

Hooke wrote of the latter in his Micrographia:

...by the help of Microscopes, there is nothing so small as to escape our inquiry; hence there is a new visible World discovered to the understanding ... By this the Earth it self, which lyes so near us, under our feet, shews quite a new thing to us, and in every little particle of its matter ... we were able before to reckon up in the whole Universe it self.

When Hooke and his colleagues at the English Royal Society beheld the symmetries, the regularities, and the fine and often beautiful forms of things invisible to the naked eye, it seemed clear that the structure of reality itself bore witness to the work of a divine creator, one who had left its hidden signature in plain sight, in the form of Very Small Things.

Questions of theology and immanence aside, there is a well established precedent from within modern science, long a most masculine pursuit, for the value and meaningfulness of the small. The later discoveries of the biological cell and the atomic particle may not have carried the same theological charge, but they continued nonetheless to expand the world of the Very Small as a realm for heroic action, and humbling contemplation.

These are some of the thoughts that occurred to me when Spot was himself Very Small. He is still small, in a way that is cute and adorable in a domesticated sense, but also in a way that is mind-boggling and edifying and escapes our ability to contain it within the modern culture of cuteness. We feed him and shelter him and keep him out of harm's way, and in the meantime a process well beyond anyone's control, asking no permission and seeking its own ends, adapts and learns and organizes itself into the form of our son.

Small is beautiful, in other words. But smallness is actually very big when you think about it, and the riddle of smallness, in the switching and clicking of DNA, is the most basic wisdom and knowledge of life itself.

For all these reasons, it is strange to me why some men should feel threatened by or uncomfortable with infants. The exoticism, foreignness, and pure neediness of the infant is often threatening to a man with a conventional understanding of manhood. After all, the world of the infant is the domain par excellence of the woman, the feminine, the domain where mothers are most assured.

Well-intentioned men have no compunction about passing off the care of infants to others. I've seen this over and over again among my friends and family. They prefer -- as both my own father and brother-in-law have admitted -- to wait until the infant has become a small person, perhaps a boy or a girl -- a miniature rather than an alien -- one with language who has likes and dislikes that can be engaged with on some level of familiarity. A creature who can reflect back something of themselves, requiring little work of translation.

The infant, rather than being a small simulacrum, is instead weak, vulnerable, and undeveloped, and can mirror these same qualities of weakness back to a man who fears them. "Men usually don't like babies when they're so small," several women assured me when Spot was 5 months old and still strapped to my chest. When the masculine ideal is independence and control, the infant makes demands which must be obeyed. There is no mistaking the resulting Master-Servant relation of the caretaker to the infant's needs. And the infant relies on a form of communication based on the body and undiluted emotion, a language that requires the work of translation.

All these things have made me uncomfortable at one point or another over the last 18 months. As Spot becomes more of a little boy and less of an infant, the issue becomes less acute, but the act of caring for small things is still an unsettled zone within the unsettled male identity. It doesn't have to be. I've drawn one example from the history of Western science to suggest that there are many ways to think about smallness that are not diminishing.

I'm sure there are many others. Somewhere between the roles of the craftsman, the tinkerer, and the shepherd, I'd like to think, are exemplars of the good that can come from long and close attention to Very Small Things.
Posted by chicago pop