Loner Dad and the Playgroup 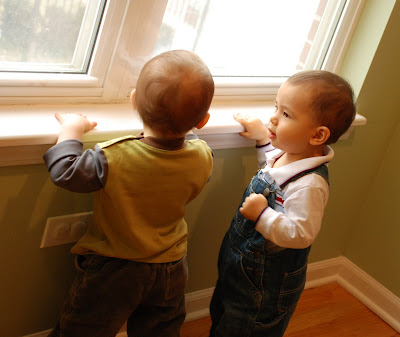 It was about one o'clock in the afternoon, and Spot and I were on the second floor of the Unitarian Church, in a sunny room full of toys. On the other side of the room was Libby, about six months older than Spot. It was Spot's first visit to the community play room.

Before Spot could get too involved in a bout of solipsistic chewing, I decided it was time to force matters. I picked him up, took him across the room, and put him down about a foot away from Libby. Spot needs friends. He needs socialization. It had been a very long winter in our house. He is a fine boy, and I do what I can, but we have only one child, the dogs can only do so much, and his father is a loner.

It should have happened a lot sooner, actually, but here we were, on the first really nice day of spring, when I couldn't use the weather as an excuse not to get out. It was the first day, really, of my open-enrollment, adult education classes in primatology and remedial fathering.

Libby had a small, rigid plastic doll, and held it out. Spot gazed at Libby with wonder, and reached out to touch the doll. "No!" said Libby, and took the doll away.

Spot had no visible reaction, just made eye contact with dad, then Libby, then scanned the room. From the distant horizon, Libby's mom, a wonderful woman I had met only an hour before, suddenly materialized above the three of us like the referee of some magical game, and reminded Libby that she ought to share her toys with the new baby. At the same time, she managed to find a doll just like the one Libby had, and gave it to Spot.

I realized Spot was not the only one who was learning things that afternoon.

There was some passing back and forth of toys, some more attempts at sharing, and my own only partially effective attempts at mediation. Libby said a few words. She and Spot blatantly and most impolitely stared at each other. Spot made a few babbling grunts. Two more kids showed up, we rolled some trucks around, and then we left.

I don't know if it was the spring weather, the very nice mom I had just met, or contemplation of these first, basic steps towards language that were responsible for my euphoria afterwards. But out on the street, pushing the stroller along, I felt a sense of happiness that had eluded me for months. I needed to take Spot back, often, as much as our schedules allowed. And I needed to go back myself. A lot.

I called Spot's mom at work. "We checked out the playroom today. Spot is learning how to share. I felt like Jane Goodall. It's great."

The truth was, I was just as proud of myself. It's not in my nature, necessarily, to be a joiner. As a bachelor or husband, it was something I had never worried about. As an adult, I have the psychological calorie reserves that a social animal needs to survive the periodic famine of isolation. Spot doesn't have those reserves. He needs a rich and full diet of experience with humanity. Even if that begins with only one little girl.

My wife didn't say much on the phone then. I think she sensed a milestone quality of the event, and even more the prospect of an accelerated series of such events opening up in Spot's future. And a lot of them, she knows, will be communicated by me over the phone, while she is at work, on nice spring and summer days like this one. Our little feat that morning -- and my little challenge -- would have been effortless for her, she would have done it months ago no matter what other obligations she may have had.

But she couldn't. Which means I have to, though I hadn't necessarily wanted to. But that last part seems to be changing, which is the great thing about being a parent, and partly why I think I was so happy that afternoon.
Posted by chicago pop

I love watching my daughter in those social situations. I'm trying real hard to be the shepherd...uh...to not be a loner, and this means being really really really comfortable hanging out with moms. Because if I had my druthers I'd probably raise a little monster who treated other kids like new toys.

This is a lovely piece - particularly the way in which you weave in how much you are learning from watching Spot.

I can imagine myself in your shoes (I'm the mother, but my husband is the SAHD) and I'm glad you found a friendly parent to help you through the first time.

BPD, I've been following your blog and you've bravely launched yourself out there into mom-dom. Hats off. Have a feeling it's around the corner for me and Spot. May follow your lead.

Jennifer -- hope your SAHD has those few friendly moms to lean on too. So far, so good!