Field Notes From a Jungle Gym 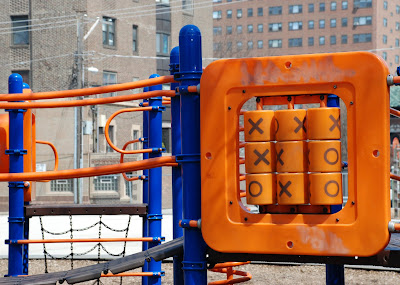 So I was up in the tower of the multi-plex jungle gym, if that's what they're still called, surrounded by six little monkeys who had climbed up out of nowhere just a moment ago and now formed this adventurer's society of largely illiterate creatures who surrounded us. In one direction was the drawbridge over the Infinite Abyss; in another, the Tunnel to the Edge of the Universe; over there, two adjacent steering wheels that could be used to conduct our ramshackle bus-train-spaceship in two directions simultaneously. Among the two children who could talk there was disagreement as to which type of vehicle we were inhabiting. The rest of us were along for the ride.

Behind us, the spiral slide that was the only part that Dad could really fit on.

It occurred to me briefly that other folks in the play park might suspect me of being a pervert, a local Michael Jackson up in this fantasy tower where only kids should be, hunkered down crossed-legged so no one could see me. Some nerdish dad in fact came over and poked his head into our pirate's nest, a mid-to-late-twenty-something grad student dad, clutching some ridiculous journal article he had naively hoped to read, a soon-to-be-obsolete prescription for how to keep China in line, or perhaps a discussion of the hidden concordances in the late work of Ezra Pound and Walter Benjamin.

All rubbish, of course, both his reading and his suspicions, for I had my identity card, my backstage pass, my carte d'entrée. It was a 23.5 lb bean bag, sitting at somewhat of a list here in the conning tower of this jungle gym, watching the other more mobile bean bags circulate through the various tunnels and spirals and spouts to return to the center once again where Spot gaped at them all and uttered "Bah!"

"Bah" indeed! What an appropriate retort to the universe, at all stages of earthly existence. A word that marks the beginning of language and, perhaps, the end of philosophy. What do you make of the world crisis today, Spot? "Bah!" I agree. Much wisdom up there in the lookout tower of the jungle gym.

But this wisdom is not always apparent to the older monkeys, freshly absorbed in the folly of youth that comes with the first trappings of power -- the power to move, the power to communicate, to manipulate, to dream. To a charming 4 year old girl who quickly became the dream-leader of our band of pirates, who laid out careful instructions about what we were going to pretend to be doing, I said, "Hi, this is Spot," highlighting my wide-eyed and swaying bean bag.

"I'm a big girl!" came the ageist and disdaining response.

"That's OK, we'll still hang out with you," I replied on Spot's behalf. Being small is about as cool as it gets, but being bigger is cool, too.

But what I think is really cool, if I haven't already tipped my hand, is being where the action is, up on the jungle gym, and not on the sidelines with the other parents. At least on this nice spring day, eager as I was to take my relatively young charge and introduce him to the world of Hobbits, Elves and Monkeys.

It's not that I'm not averse to schmoosing with Big People down below; in fact, I had done that for about half an hour before Spot and I scaled the jungle gym. But it was going nowhere and our time was limited. There were the two Jackie Onassis moms in big sunglasses and wool coats deep in conversation while Johnny buried his head in a sand box; there was the solo mom on the cell phone who took off as soon as we entered her quadrant; there was the Korean couple who had carved out a modest but exclusive Sphere of Influence for themselves, their son, and various earth-moving devices; and there was the friendly, slobbish dad with two kids that we couldn't keep up with.

That left the jungle gym. Unoccupied. Terra nullus. So up we went to take in the view. And the beauty of it all was that, within minutes, a small crowd had followed us, and suddenly we were at the center of it all. I made a few introductions, then stood back to guard the precipices. The small crowd of small people ebbed and surged, but always fell back to the center, and recognized itself. And Spot was a part of it.

"Bah!" he said, and I agreed.
Posted by chicago pop

this is good stuff. simply enjoyable.