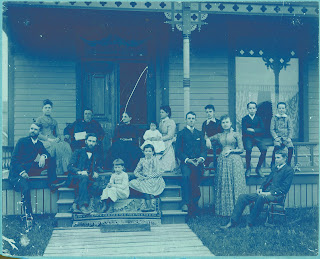 This photo depicts the J. Bates home in Minneapolis, Minnesota in the late 1800s. Note the size of the family and the size of the porch they share. Families of this period were large, both because extended family stayed together and because children were still an economic necessity: more of them meant more hands to work in farms and shopfloors. Fathers and sons often worked side by side, and so did mothers and daughters. The economic and domestic were not separate spheres; though in the process of being eclipsed by large-scale enterprise, at this time the home economy was still America's fundamental economic unit.

As a consequence, marriage was primarily a business decision--as it had been throughout the world for thousands of years. For the lower, middle, and upper classes, people had little choice about whom to marry. Once married, they could divorce only in special or extreme circumstances. Fathers were the undisputed heads and masters of households, by both law and custom. Marital rape and wife-beating were, in most cases, perfectly legal.

Another thing to note about the J. Bates family: it is monoracial and was almost certainly monocultural. Though interracial marriage was more common than we might suppose--see Randall Kennedy's 2003 Interracial Intimacies--it was still widely condemned and illegal in many states. Nineteenth century families had more in common with previous generations than they might have with families today, but society was changing. The family as an economic unit declined; as a consequence, love rose in importance. Young people began to feel that when love dissolved, so should the marriage. Between 1880 and 1890 the divorce rate soared 70 percent. 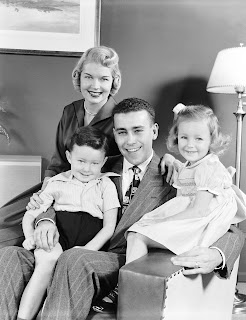 Throughout the first half of the 20th century, people left farms and small towns for cities. Extended families fragmented and the nuclear family emerged as the dominant family form. Children became more of an economic liability than an asset; as a result, sentimental attachment to them intensified. As the century wore on, child labor was abolished and universal schooling was made mandatory. Government programs like the GI Bill educated millions of American men and increased their social mobility.

By the middle of the century, postwar prosperity made the male breadwinner and female homemaker family possible. Most men worked in offices and factories far from home; they did not take care of children. The vast majority of mothers did not work and raised kids far from from extended family. Thus mothers were isolated and many children grew up without fathers, grandparents, aunts, or uncles as stable, regular presences. By the late 1950s, middle-class women--and their children--started to rebel against isolated, retricted lives. "It took more than 150 years to establish the love-based, male breadwinner marriage," writes family historian Stephanie Coontz. "It took less than 25 years to dismantle it." 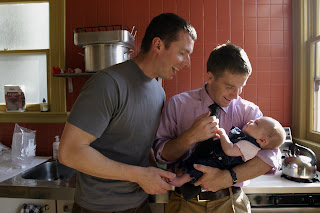 At the beginning of the 21st century, families are egalitarian, diverse, isolated, and voluntary. Where once there was no choice at all, today we have too many choices. Take a look at this 2004 photo of Brian Brantner and Matt Fuller holding their 2-month-old adopted daughter, Audrey, in San Francisco. Their family could not have co-existed with the J. Bates family in 19th century Minnesota. The gay family is, in fact, something totally new under the sun, blossoming side by side with stepfamilies, female breadwinner/male homemaker families, multiracial families, and so on. Today, only 7 percent of families fit the 1950s mold of breadwinning father and homemaking mother.

At the same time, the American economy is far less stable and social mobility has declined dramatically; class barriers are much more rigid than they are anywhere else in the developed world. This means that family is more important than ever in determining a child's chances in life. Poor children are falling behind richer counterparts, a process that starts before they even enter school. Educated parents are investing large amounts of time and money in their small number of offspring; both husbands and wives are spending more time with kids and at work, and less time with each other or in the community, which puts tremendous strain on love-based marriages.

Surveying decades of research, the sociologist Gosta Esping-Andersen writes, "What is now becoming clear is that the seeds of inequality are sown prior to school age on a host of crucial attributes such as health, cognitive and noncognitive abilities, motivation to learn, and, more generally, school preparedness." As marriages become more egalitarian, society becomes less so. We should celebrate the gains made in women's economic empowerment and male participation in domestic labor. At the same time, we should do what we can to resist rising inequality and social under-development. 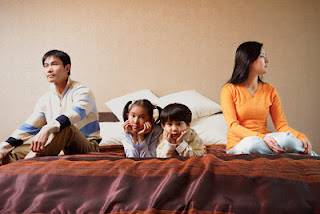 Most of the photos above illustrate an article by Stephanie Coontz that will appear in the September issue of Greater Good magazine, which will focus on the relationship between the diversification of family types and the well-being of parents and children. I'm happy to provide a free copy to any blogger who promises to write about the issue. Send me an email at jeremyadamsmith (at) mac.com.
Posted by Jeremy Adam Smith

Jeremy-an excellent post. Amazing that the divorce rate was so high in the late 19th century. The contrast between egalitarianism within marriages and inequalities in society at large is thought-provoking. Certainly, nothing is stable. Keep it up.

Thanks. It's my attempt to synthesize a huge amount of reading I've been doing about the sociology, history, and economics of the family. It's striking to see the series of trade-offs that families have made: two steps forward, one step and sometimes two steps back. For over a hundred years, families have sprinted to keep up with constantly changing conditions. I can't even imagine at this point what standing still would look like.

Fascinating post. And an effective counter to the right wing defenders of the "traditional family." The family they purport to defend is, as you point out, not only not traditional, but a rather recent invention. The "Father Knows Best" 1950s model of the family that the modern social conservative movement seeks to preserve is not only a recent invention -- but an enormous historical oddity as well.

Another interesting aspect to the changes in families and the economy of which they're a part in the past century is the massive change in how people work -- not just where. "Work" today for a majority of Americans is very non-physical -- not just for white-collar office workers but for many in the dominant "service economy." Whereas in the past, work meant pulling, digging, lifting, hoeing, and otherwise exerting oneself to move objects of various sizes from one place to another, today it primarily means pushing buttons. I wonder what effect this change has had on families -- certainly it's had a health impact -- not all bad, obviously - maybe we get less exercise but we also get less black lung and the like.

And then of course there's the ironic alternative bumper sticker "It takes a child to raze a whole village."

"I wonder what effect this change has had on families..."

I think it's affected men and women differently.

For men, it's meant this century-long, slow-burning crisis in masculinity. Once upon a time, being a guy was pretty simple: men didn't feel a need for the elaborate masculine performances you see today. They really didn't. They did hard physical labor (usually on farms, later in pre-automated factories) and worked with family members to feed themselves, and that was that. Now we seek the replicate the results of physical labor in gyms, and the results are, more often than not, ridiculous.

Women have had a more dignified path. The opening up of work and introduction of domestic technology (fridges, washing machines, etc.) allowed them to live fuller lives. Anybody who says technology is bad for women is full of ideological horseshit. Machines may have been mostly created by men for men, but women benefited, and now women are helping make the machines, not to mention operating them.

And this: "The picture you start with perhaps reinforces the bumper sticker 'it takes a whole village to raise a child'"

My own essay for the issue of Greater Good that I mention actually tackled this exact issue.

Another thing conservatives might not like about a historicist understanding of the Western family is the argument (Durkheim) that the emergence of the nuclear family centered on affective ties was made possible by a corresponding expansion in the powers of the State. For example, laws over inheritance, suffrage, lowering of age of majority, right to choose a partner independently,legal status of children and wives, etc. all involved the expansion of the state's legal powers.

Coontz is wonderful--loved "The Way We Never Were". You might also enjoy: "Public Vows: A History of Marriage and the Nation" by Nancy F. Cott, and "What is Marriage For?: The Strange Social History of Our Most Intimate Institution" by E.J. Graff. It's always important to have both a historical and an anthropological/cross-cultural perspective.