What Is a Father? 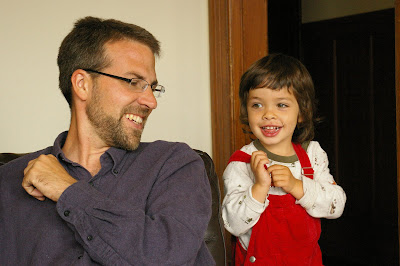 Here's an interesting set of first-person stories from four very different fathers. In a strange way, perhaps because I've never talked with anyone in this position, I thought the story of the sperm-donor dad was most interesting:

Several years after my divorce, I found the Donor Sibling Registry, a Web site where donor offspring can find their half siblings and, sometimes, their donors. Rachael, one of the moms, had listed her two kids, Aaron and Leah, under my donor number. When I saw their names and their ages — 6 and 3 at the time — I got very weepy. Oh my God, these were my kids! Within hours, we were talking on the phone. Rachael asked, "Is it okay if they call you Dad? Would you prefer they call you Donor?" I was fine with Dad, and that's what they called me when Rachael brought them out to see me from Massachusetts. Today I have relationships with four of my children. My son in Southern California knows I'm his father, but he calls me Mike. More recently, I met Precious, my daughter in Hawaii. She never asked; she just called me Dad.

I assumed 99 percent of people who bought donor sperm would be infertile couples and that the kids would already have fathers. I didn't anticipate so many single moms. Of my known kids, none of them has a dad. Most of them don't have living grandfathers or uncles or any men in their lives, really.

A lot of men out there get married, have children, raise them for a year, and then take off. They are still very much these kids' fathers, even if another man moves in and takes over. The biological father could be a deadbeat dad, but he's still a dad. He could be an awful dad, but he's still a dad. Now I'm a donor dad, or an absentee dad. But for these kids, even though I don't live with them, or even near most of them, and I don't pick them up from school or help them with their homework, I'm the only dad they know. And the mother... until now, they had been complete strangers to me.

But I haven't been a complete stranger to them. They chose me. Granted, all I was to them was a donor profile and a tape recording, but that alone creates a persona in their minds. They carried their... my... our children, and of course they are madly in love with them, so the donor becomes a part of all that intense emotion. I think some of the moms have some issues, not with me, but with one another. I don't want to say there is a tug-of-war over my time, because no one has been demanding. But there is definitely tension.