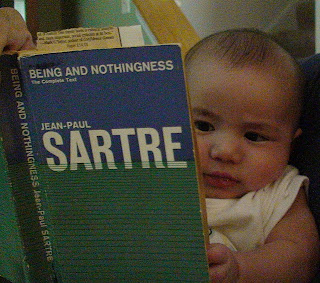 If we were to grab a coffee together, you probably wouldn't guess that I'm going crazy. You might not even suspect that you're the first person I've spoken with in, say, 24 hours, discounting purely functional exchanges with my wife as she heads out the door in the morning. I might look a little tired, a little dark under the eyes, and if I played my cards right my garbled mental functioning might come across as laid-back and mellow. Sitting back in my cafe chair, legs crossed, I would be ravenously pirating your social energy without you even knowing it.

But all told, you would be deceived. Because at that moment, I might indeed be on the verge of a nervous breakdown. Married, yes, but lately coexisting in the same household, two flywheels of different diameters rotating past each other at different rates. And little Spot: is he the cause, or the cure of it all? Or perhaps both? He certainly is the focus of a new dispensation, one that alters perception in such a way as to make the days blur, to give me deeper happiness than I've known since my own childhood, to make me lie awake in the small hours of the morning wondering about our future relationship as Father and Son, about how old I'll be when he graduates college, what we'll do if my wife looses her job, what I've made of my life now that it's nearly half over, when the next war will come. That sort of thing.

Which is enough to make anyone lose some sleep and feel slightly batty. My own ethnographic "participant-observer" stint as an at-home parent helps me understand the supposed craze for Valium in the mythical hey-day of the bored 50s housewife, to say nothing of the pent-up and aching Victorian bourgeois woman chronicled so well by E. M. Forster. What energies and impulses are building in me that I am unaware of? For a few hours of the day, usually in the morning, I wheel the Spot through parks and down sidewalks, chatting to a few neighbors and savoring the sense of expansion in this limited time beyond the walls of our home.

Soon enough, it's back inside, and for Spot back to bed, which means I can't go far. I have plenty of work to do, but feeling slightly batty isn't always a productivity-booster. What will my son think, when he's old enough to ask me what I do? "Daddy," I can imagine him asking, "why don't you leave during the day like Johnny's dad?"

"Well, I do leave once in a while to teach, research in the libraries, and a lot of the time I'm in my home office working. But my primary job is to take care of the things at home, and to take care of you. Which means I can take you hiking or out for a sail-boat ride in the middle of the afternoon. And chances are, we'll have time to go to the beach more often in the summer."

My wife isn't worried at all about that. In fact, she's certain that Spot will have far more trouble understanding what mommy does all day and why she has to go away to do it: the sitting-in-a-cubicle-staring-at-a -computer-sending-emails-making-phone-calls-yet-earning
-all-sorts-of -cash world of knowledge-based office employment. What I do is much simpler.

My deeper worry, though, is battling my own isolation. It ebbs and flows. Sometimes it's a matter of my own fatigue, of putting off for another day what seems like the chore of making phone calls to friends, catching up, arranging a get-together, making sure I keep up my existing guy-relationships in a world that seems to have been suddenly emptied of other men, and getting up the energy to build new relationships in the fields of female energy. Sometimes it's easier to retreat, let Spot take a nap, and catch up on my reading.

But ultimately, for him, that's not ideal. The more I'm out in the world, the more he gets to see of it, and any advance knowledge is a leg up. Just today, I built in some time to take him to the play-park mid-way between our home and his grandparents. Less than a mile from the University, shaded from the semi-tropical sunshine by tall maples and poplar, this particular jungle-gym and set of benches is populated with the mothers, grandparents, and children of Chinese graduate students conversing as if in Beijing, interspersed with various moms speaking Italian, German, Spanish, and all loosely tied together by the English lingua franca. And Spot in the middle of it all.

Two little boys, about 5 and 6 years old, saw that there was a new baby around and immediately came up to offer him their toys. My father-in-law held Spot up to take one, and the little boys laughed when he did. I had to pause to take in what just happened. I'm not the only one willing to help take care of Spot -- even these little boys, in a touching gesture, were offering to do their part. It seemed like they were waiting for him. That's his future, I just needed to bring him to it. These are just a few of the welcoming arms Spot has encountered. Part of my job is to do the work of building relationships that will let Spot find more of them. In the process, hopefully, I can also keep from going batty.
Posted by chicago pop

It will get better in fits and spurts. I promise. I know some excellent sitters who charge reasonable rates-get out on a date with your wife! That was my saving grace when mine was Spot-sized.

That and taking up a non-child related hobby that required getting out of the house. A class at the Old Town School is so much cheaper than therapy and/or hospitalization! Make sure your new hobby includes some required weekend evenings out, too. Gets the crazy right out of you. And leaves you feeling cared for and relevant and more able to invest in the child-raising relationships that make life go around. Hang in there. :)

Your post makes me feel almost nostalgic for the good old days when I was going similarly crazy. Yes, it will pass, but not before you go crazier. SWE is absolutely correct, of course. Get a sitter, go out on dates, carve out fleeting moments for things you enjoy. You will survive, and then everything will change, and it's on to the next set of challenges.

dude,
my first wife was "loose"...
the word you need to use in your post is 'lose'. I see this error so many times. I keep telling every one to think of my ex-wife and they will never make this grammar error again.

btw, I am mr mom to my 3rd child (now age 11) from (2nd wife) and I love the experience. I never would have realized what a joy and what a gift it was that I was bestowing on my first wife to allow her to stay home and raise children. I apologize to my first two kids constantly now that I see how much more I *should* have been involved in their lives.
Whether or not you can be mr. mom in your household or not, men need to WAKE UP to the fleeting beauty that are their children, and the joy and NEED to imprint them with as much male influence as possible - ideally half. I'm sure this next assertion will garner flame (esp. from gay community) but it seems clear to me that a child totally raised by one gender (or the other) will never be as well-balanced as one raised by both.