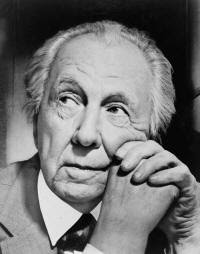 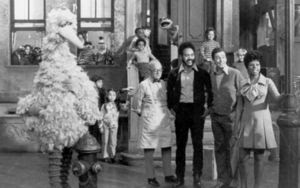 2. Sally: That is to say, Sally from the very first 1969 episode of Sesame Street, the DVD of which my father gave Liko as a present. Liko becomes the little girl Sally (that's her, above, standing between Big Bird and Mr. Hooper) when he wants to be cuddled or put to bed. It's very sweet. I'm not sure why he fixated on Sally, the new girl in school whom Gordon shows around Sesame Street, introducing it for the very first time in the history of the world. As far as I know, Sally was never again seen on Sesame Street (foul play?), but Liko has shown no interest in becoming such beloved characters as Oscar the Grouch, Big Bird, et al.--though Cookie Monster has made a few appearances at our dinner table. I should add that in that first episode you can see how very cool Sesame Street used to be: the cast consists almost entirely of African-Americans and Latinos, set on a gritty urban street (as opposed to the usual bucolic or trippy settings of children's TV), with TV's first openly gay couple -- I speak of Bert and Ernie, naturally. Plus, the music and graphics are terrific, vastly more creative that anything you see in today's Sesame Street, which is just a pale shadow of its former self.

3. Liesl von Trapp: Who the hell is Liesl von Trapp? She's sixteen years old and she don't need no stinking governess. She's the eldest daughter of the Trapp Family Singers, whose origins are fancifully depicted in the 1965 musical The Sound of Music. For two weeks after first seeing The Sound of Music, Liko would wake up in the morning, announce that today he was Liesl, belt out a few lines of "Do-Re-Me," and leap gracefully about the room. Liesl still makes regular appearances in our home. What's up with that? No idea. I just hope he doesn't decide to become family patriarch Captain Georg von Trapp and start singing "Edelweiss." If that happened, I'd have to jump out of the nearest window.

4. Mozart: This fantasy was triggered by Peter Sis's beautiful children's book, Play Mozart, Play. In Liko's mind, Mozart is some kind of MacGyver-like superhero. Last week, Mozart, as channeled by Liko, built (by hand!) a cargo plane out of couch cushions, filled the bay with musical instruments, flew it all to Africa, unloaded the plane, draped at least four instruments around himself using various straps, and gave an epic concert, performed on the stage that is our bed. Amazing. Ten times better than "Cats." Fifteen times better than "Phantom." 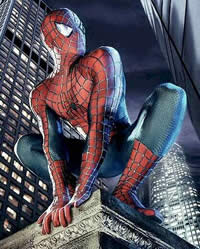 5. Spider-Man: Liko can pretty much do whatever a spider can. Spins a web, any size. He catches thieves just like flies. Look out, readers! Here comes Liko the Spider-Man. I once asked Liko why he likes Spider-Man so much. "I like his costume," said Liko. "And I like how he shoots things out of his hands and flies through the sky." I've since noticed that quite a few little kids like Spider-Man and I've started asking them the same question, and the answers are all more or less the same as Liko's. I also think Spider-Man is cool, but that has more to do with his origin as the world's first anti-authoritarian superhero and the wonderful emotional and philosophical dynamics of the series' main characters. Also, the costume. And the way he shoots webs out of his hands. During the aforementioned trip to New York, I kept imagining Spider-Man swinging around over our heads...and so did my son.

Yay Liko! I have the Sigmund Freud action figure too, cigar in hand, right here on my desk. Liko might also be interested in the Foucault action figure, as well as Anthony Giddens [http://www.theory.org.uk/act-faq.htm] Ages: 3-30, at which point one stops believing in "theory".

It has been argued, and convincingly, in my opinion, that toys that are too single-purpose or "directive" in their playability limit imagination -- i.e. a track that cars just whiz around fosters less creativity than, say, a big bucket of blocks, out of which any number of vehicles, structures, roadways and even meals can be imagined.

But I think it's more two-way than that. Our son, like many preschoolers, is fairly obsessed with the Cars from Disney/Pixar's "Cars" movie. We have practically all of the die-cast characters, including the recently-recalled "sarge." Initially this bothered me, because we try to steer clear of massively promoted licensed characters, and to not glorify the internal combustion engine.

But to watch him play with them is fascinating. Yes, they do their share of zooming and crashing, but they also has complex dialogues and interactions that have nothing to do with their car-ness. They have disputes over sharing, they take care of each other, etc -- pretty complicated narratives that no doubt reflect things our son is working out through developmental stages.

So, yes, kids can be passive recipients of mass-marketing, something which corporate america exploits to the tune of billions in annual profits. Yet even 3 year olds can change the terms of the interaction, and "reclaim" some independence in how toys are used and meant to be used.

Haha. So cute. Your child's friends are a good advertisement of your parenting, how very cultured.

Hmm. I detect the slap of a back-handed compliment there.

You know, the thing about the characters that Liko pretends to be is that I just never know who will catch his attention. Why Mozart of Play, Mozart, Play instead of Thomas the Steam Engine, which he has also read? Why Frank Lloyd Wright instead of Mickey Mouse?--Liko knows all about Mickey Mouse. No response. It's very puzzling to me.

I think that sometimes parents erect too strong a wall between adult and kid culture. A friend pointed out to me that my wife and I don't make much of a distinction between our adult activities and kid activities--we just pursue the things that interest us and take Liko along for the ride, and of course we also do the things he likes to do. Some things make an impression, some don't. I see my job as exposing him to as broad a range of culture as possible, and he can do whatever he wants with it.

Jeremy writes: "I think that sometimes parents erect too strong a wall between adult and kid culture."

Totally. If Liko was obsessed with Linus Pauling or Rimsky-Korsakov, more power to him; great inspiration can also be taken from Bugs Bunny or the latest Youtube video. Modern culture is to a large extent a hodge-podge and what matters is that Liko's interests not be discouraged because something is thought to be "high" or "low".

I have to share an anecdote: This morning Liko announced to me that his Frank Lloyd Wright doll was pregnant.

Liko plucked something invisible from Frank's tummy and held it up for me to see.

"Aw," I said. "It looks just like the Guggenheim."

Liko peered at the baby building in his hand. "No," he said. "I think it looks more like Fallingwater!"