Jeremy and Shelly vs. Their Kitchen 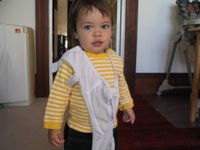 Just finished an interesting essay in the academic journal The New Atlantis, "Are We Worthy of Our Kitchens?". It covers a lot of the same themes of my previous blog entries on balancing work and home, but from a different angle:

Judging by how Americans spend their money—on shelter magazines and kitchen gadgets and home furnishings—domesticity appears in robust health. Judging by the way Americans actually live, however, domesticity is in precipitous decline. Families sit together for meals much less often than they once did, and many homes exist in a state of near-chaos as working parents try to balance child-rearing, chores, long commutes, and work responsibilities...

Ironically, this decline in domestic competence comes at a time of great enthusiasm for “retro” appliances and other objects that evoke experiences that many Americans rarely have. We seem to value our domestic gadgets more and more even as we value domesticity less and less.

"Many homes exist in a state of near-chaos" — OK, yes, that certainly describes our household. The essay is filled with a fascinating history of household appliances and little tidbits about the trajectory of domestic labor:

“It must be remembered,” wrote Isabella Beeton in 1869, that the kitchen “is the great laboratory of every household, and that much of the ‘weal or woe,’ as far as regards bodily health, depends upon the nature of the preparations concocted within its walls.” Today, the laboratory is filled with the finest equipment, but there is often no one to use it. Despite purchasing more and better appliances, home-cooking and family dinners are both racing toward extinction. American Demographics reports that between 1985 and 1995, “the number of hours women spent cooking per week dropped 23 percent, and the number of hours men cooked dropped by 21 percent.” By 1997, the U.S. Energy Information Administration reported that more than one in five households used their (non-microwave) oven “less than once weekly” and only 42 percent “make a hot meal once a day.”

The author, Christine Rosen (an academic, natch), ends the piece with a rather utopian call for the renewal of domesticity:

What is necessary is a sober defense of the worth of domestic life, including those labors—chopping vegetables, sweeping a floor, setting a table—that are hardly glorious in themselves but essential parts of the domestic satisfactions we still seem to want...

Unlike some feminist critics of domesticity, who argue for the lowering of domestic standards—Cowan wants to overthrow the “senseless tyranny of spotless shirts and immaculate floors,” for example—Mendelson and others seek to elevate the domestic sphere in a culture that too often denigrates or neglects it. They hope to appeal to the deeply-felt yearning most people have for a comfortable and well-functioning home life. And perhaps, in a strange sense, they want to make us worthy of our fancy machines, which means recognizing the permanent limits of domestic technology to produce domestic happiness. Not a brilliant way to sell the newest appliances, but a recipe for learning again how—and why—to use the ones we already have.

I am afraid that I actually laughed out loud as I read this conclusion (which woke Liko up; he was sleeping on my lap). I'd love to "elevate the domestic sphere in a culture that too often denigrates or neglects it" -- just as soon as I get the time. I think that our little family would also need more space; it'd be hard to live out her utopian vision of domestic bliss in our cramped urban apartment.

Here's the problem: we Americans don't live this way because we want to -- we are forced to by the economic insecurity and inequality that drives our economy. Sure, you can make individual choices or get lucky -- get rich and retire to the country, decide to live with less money and move to a red state, don't have kids, etc. -- in ways that might mitigate anxiety. But the choices we make (and the luck we have) are shaped by our relative family wealth, the need to secure health insurance and pay outrageous rents or mortgages, and the desire to give our children opportunities and expose them to values and cultures that might not be available out in suburban Jesusland. Our lifestyles and values are driven by an unforgiving business culture and abysmal parental leave policies -- not misuse of household appliances. Am I characterizing Rosen correctly, or have I missed something?

Also: Yes, your suspicions are correct: in the photo published with this blog entry, Liko is wearing a bra around his neck. We have clothes – including, as documentary photo evidence indicates, ladies’ undergarments – lying all over our filthy, disgusting house. Doubtless our failure to establish clear-cut gender roles and to elevate the domestic sphere will inevitably lead our son to become to a cross-dressing slob. Perhaps that's a good thing?
Posted by Jeremy Adam Smith

Bravo on the post and the blog altogether. Definitely bookmarking this one. (I got here via Echidne, BTW.)

And My 19-month-old will dig through a pile of dirty laundry to find underpants to wear either on her head or around her neck. I suddently feel less bizarre.

BTW, I wasted a solid ten minutes of critical, supposed-to-be-working time this morning clicking through the power pop videos I found on your blog. "Respectable St." -- yeah, I remember that one. Now it's stuck in my head.

Echidne rocks, and her commentary on Longman was first-rate. Folks can check her out at http://www.echidneofthesnakes.blogspot.com/. "Interrobang" makes an amusing and maybe true comment on Echidne's critique of Longman: "I wonder what the correlation is between people who believe that liberals are born, not made, and people who believe that homosexuals are made, not born. I suspect it's fairly strong."

Actually, the implications of this are terrifying.

That kid is so fucking cute. Seriously.

I got here from Snake Goddess' web as well nymary.

Cleanliness -- beyond the basic not too sticky, not too germy, toss the moldy stuff from the fridge instead of eat it -- is overrated.

Life's just to short to spend sterilizing the ceiling. Or having floors clean enough to eat off. Ick. Who thought up that saying anyway?

Trust me on this.