Jeremy vs. the Nap 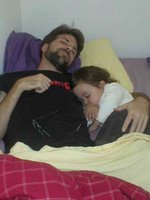 Shelly worked late last night. The boy and I went out to dinner, walked around, shopped. At about 7:30, when he realized Mom was late, he started to squirm and whimper. I flashed back to August, when Shelly had first gone back to work. I hadn't been alone with him for more than six hours at a time and I had never successfully put him down for a nap -- Liko, a confirmed breast-addict, needed Mom's milk to sleep. When I'd set him down, he'd wail inconsolably, relentlessly, reaching out to me, but when I picked him up, he'd fight back, kicking and arching his back, his little hands pushing off against my chest. When Shelly left for work that first day, it was me and him, and it was scary. I remember at first, when he got tired, I'd put him in the stroller and walk. He'd cry and fall asleep, but when I stopped -- in a bookstore, a coffeeshop -- he'd wake and cry again. I'd keep moving, sticking to the side streets, going up the hills and down, up and down. Time slowed and with every minute I'd feel more and more anxious. Was this now my life? I'd see three people laughing in a picture window, and want to be one of them. Soon I let that go, let myself get lost. On foggy days the hills of San Francisco floated around me like deserted islands. I'd study the cornices and gables on the Victorian facades, watch the tsunami of cloud spill over Twin Peaks. Later Liko learned to fall asleep in my arms. I'd carry him through all the rooms, stepping carefully around the bouncy seat, the swing, the baby gym, the high chair, the toy basket; I'd do this for hours. One day I sat down in a rocking chair and he didn't wake up. I took a book down from the bookshelf. It was the best book I'd ever read, I don't remember its name. Now we had a routine: I'd carry him, he'd fall asleep, and I'd sit rocking with him on my lap, and I'd read. I loved reading again after going months without finishing a book. When my eyes got tired they'd fall to his pocket-sized face, see his fingers on my forearm. One afternoon as the room darkened, his eyes snapped open and he said "Dada" and smiled; he was glad to see me there with him. Now he can nap on his own, though he wakes up often and I often take him back in my lap. He's a terrible sleeper. Last week I met a dad at the playground; he had a nine-month old. Got the day off? he asked. I told him that I took care of the baby while my wife was at work. Every day? he said. Sometimes we have a sitter, I said, when I have work to do. He looked at his baby, who was trying to lick the sand. I've never been alone with her for more than three hours, he said -- that sounds scary, to be alone with a baby all day; what do you do? I told him: Nothing much. I was scared at first, but now I'm just nervous all the time.
Posted by Jeremy Adam Smith