Liko at the Anarchist Book Fair 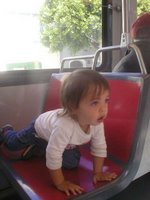 On Saturday I took Liko to the Anarchist Book Fair - at left you'll see him pictured on the N train, fucking shit up in preparation for the Fair. The weather was perfect; Liko was perfect. I was happy to be a dad, living in San Francisco. At the Fair I saw old friends like Jason of Anarchy Magazine, who shared pictures of his two beautiful kids.

There were, in fact, lots of kids running around the Fair, which provided first-rate drop-in childcare. (Is there an anarchist baby boom? So much for Longman's thesis about the death of dissident bloodlines. BTW, no, I'm not an anarchist, but Liko certainly is.) Volunteers Lisa and Chris took excellent care of the kids; I left Liko with his new friends for fifteen minutes and had time to actually browse. Remarkable. When I came back, I was alarmed to hear that Chris had taken Liko outside because "he seemed like he needed some air"; I ran out - not worried, mind you, but concerned that Liko was unmanageably fussy - but found him sitting happily in the grass while a black-clad, bearded krusty showed him how to play the banjo.

I met Rahula Janowski (whom I've been seeing out of the corner of my eye with her daughter Natasha for years around the Mission) and bought her 'zine Joybringer; I also met Tom Moniz and bought his 'zine Rad Dad. After we got home and I put Liko down for his nap, I read both Joybringer and Rad Dad cover to cover. I found them both heartening, gateways to a wider community of parents who are trying to raise kids in radical ways.

It won't suprise readers to hear that we felt pretty isolated when we became parents; when Liko was born, we knew only one other couple in San Francisco who had a kid; our families live in faraway places; and neither Shelly nor I could relate to the images of parenting we saw in the media. I'm not whining about it, but that was our situation.

In my consulting work, I advise independent media and media justice organizations on strategy and audience development. I meet with people who are all over the political map, and some of them openly scorn blogs like the one you're reading or stappled together, xeroxed zines like Rad Dad. I'm still burning with annoyance at a libertarian who got rich selling a dot-com just before the crash, who, in a meeting last week, referred to small-scale indy media projects as "mere noise." If you're not making a big impact, she said, you're wasting time.

But what do you do, and where do you go, when you don't see anything in the culture that resembles your life and values? You make your own media, for a start; that helps you to find other people who are facing the same struggles. You link together; you help each other; you share ideas and sharpen your critique. Maybe it is mere noise, but at least it's your noise. Our noise. Separately, we're just telling our stories. Together we make a big impact.

Rad Dad is full of noise about trying to be a radical dad, raw, honest moments that you're not going find anywhere else:

There is a silence among men about fathering. I experienced this as I've talked with men about it; they are excited and yet scared, nervous about making mistakes, most are dying to parent in ways that many of us weren't fathered. But there are very few role models...

In the second issue, Tom writes that Rad Dad:

Has been a failure...Ultimately I feel I've failed to live up to the potential. Failed the timelines, failed to promote it well enough, failed to make the effort to distribute it in ways that it should be, failed to work hard enough to get people to send in more stuff, to be a part of it more.

Hey, Tom: I learned a lot from Rad Dad. It helped me feel better about trying to be the dad I want to be, and not the one I'm supposed to be. So keep on going. Do it for me, Tom! I need Rad Dad. I was pretty flattened by the experience of becoming a parent and caregiver; it's really only in the past month that I've started to reflect upon my experience and seek out models, and the only resources I've found are blogs like Rebeldad and zines like Rad Dad. It's helped a lot.

Both Joybringer and Rad Dad are old school hobby zines; you won't find them online. But you get back issues of Rad Dad by writing to Tom at tom_moniz@riseup.net or 1636 Fairview St., Berkeley, CA 94703. You can get copies of Joybringer at 4104 24th St., PMB #669, San Francisco, CA 94114. Send money: two bucks per copy plus postage should do it.

BTW, Liz Henry turned me on to this blog entry on what happens to parents in service sector and working class jobs. Check it out.
Posted by Jeremy Adam Smith

Y'all should come to BlogHer, and hang out with the radical mommybloggers, you would fit right in. http://blogher.org. It's in San Jose at the end of July.