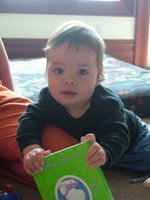 On Sunday I asked some of my fellow progressive parenting bloggers to say something to mark the third anniversary of the war in Iraq. I couldn't go to the anti-war protest here in San Francisco because it cut into Liko's naptime, but I felt like I needed to write/do something. That was my one small act. Two bloggers took me up on it: Miriam Peskowitz over at Playground Revolution (I love that name and Miriam's subtitle: "A Mom's Life is Political") and Liz Henry of Composite, a wonderful blog that is mostly about poetics, translation, and technology. (Uber-blogger Bitch Ph.D. also marked the anniversary of the war, though I had nothing to do with it. She links to some interesting resources.)

Miriam's slice-of-life post deftly shows why political activism tends to decline after children arrive, how the domestic sphere swallows us up and defines our lives, and what mainstream media do to reinforce a sense of isolation and panic. She writes:

Entanglements. We tend to think small. Our lives keep us busy. We vacuum, and we live in a vacuum. War? How come on this anniversary, what we're embroiled in are "mommy wars" not debates over the wars that kill? And cultural commentators now use the phrase "daddy wars' to talk about men's issues. What about the big war out there? We waste the word, focus on fake wars that could be fixed, that are made worse by media creation, take our eyes off the war that kills.

It's the craft of living in a vacuum, and the narrowing vision of it all that struck me as I read the New York Times this morning. The responses to Claudia Goldin's Op-ed last week, the one about how mothers aren't opting out when you actually look at statistics were singularly bad, and troped, to use a good ole literary criticism word. They came from Mommy Wars central casting, they didn't even need to be written by real people. The most amazing thing: they continue to talk about motherhood in a total vacuum. If you were reading these pieces and the letters in response, and you were from that mythical planet in outer space where miraculously you too speak and read English, you would think we are a society in which families are mothers alone with children. No one talks about fathers. No one talks about more complex dynamics than a mother and her life of paid or unpaid work. Where's the context?

Fittingly, Liz published a poem, "moon veil your mirror," which I will let speak for itself.

A friend sent me a short essay by John Berger on the historical relationship between Hiroshima and 9/11, which I share with you as a follow-up to my March 19 post on the war. It was published in 2002 in the wake of the invasion of Afghanistan (anyone still remember that?), but it is still relevant and a fitting follow-up to the Berger essay I quote on March 19.

Today in Rebeldad, Brian takes a crack at defining the term "Daddy Wars": "The growing conflict between parents - primarily fathers - and their employers over flexible and varied work options that allow for more precise work-life balance." It's food for thought; check it out.

Last but not least, my friend Alex asks me a perfectly legitimate question: "If you don't have time to achieve perfect domesticity, how do you have time to write your blog? Or read essays on the Nature of Evil, for that fucking matter? Is it the insomnia?"

He wasn't the first to ask this question and won't be the last. I have a couple of answers.

First: yes, insomnia is a big part of it. I sleep only about six hours a night; the actual writing of most of my entries happens in wee dark hours when only the people of China, Mongolia, etc. are awake and working. Or so it seems to me. This probably accounts for the melancholy tone of some of my entries. I read quite a bit during these hours; I also read during Liko's naptimes.

Second: I do work about 20 hours a week, and make part of my living as a writer. Most of my writing these days is for money, and I don't brag about it. More personal/political ideas do come to me, however, and so I think of "Daddy Dialectic" as an open notebook, where I can jot down notes that I can later develop into essays and magazine articles -- someday, when I have more time. In addition, the blog puts me in touch with other parents, many of whom I might interview when the time comes, as well as resources that I might draw upon later for other writing projects. A blog is also, for writers, a marketing tool; you build an audience around a topic, and in that way accrue some degree of authority and marketability. Also, on finding time to read: I see the reading as an essential part of writing. You need to read in order to write; you need to be in touch with news and different currents of thought. I fit it in where I can.

Third: on a personal level, I find writing the blog to be extremely theraputic. I write down the things that bother me about being a parent, and I feel better. Pretty simple. I also think of the blog as a public personal history, that maybe one day I can share with Liko. Finally, it's a place to think out loud about my values and philsophies of parenthood, and reflect upon my experience.

Yes, I could give up on all this and perhaps my life would be simpler and I'd be happier. In response, I would like to quote Richard Rodriguez: "St. Augustine writes from his cope of dust that we are restless hearts, for earth is not our true home. Human unhappiness is evidence of our immortality. Intuition tells us we are meant for some other city." In other words, I'll sleep when I'm dead.
Posted by Jeremy Adam Smith

That's funny about sleeping . . . on the weekends, I've been more and more taking naps during Zoë's afternoon naps. I get way too little sleep during the week but embarrassingly it's not because of some important work I'm doing . . . it's because I'm usually playing World of Warcraft . . .

Was it Dostoevsky, or Jon Bon Jovi, who said....

"I'm a cowboy/On a steel horse I ride/I'm wanted/WANTED!/Dead or alive...." Is that what you're thinking of, Anonymous? That's Bon Jovi, I think, who is truly the Shakespeare of Eighties hair rock. It was, on the other hand, Dostoevsky, that second-rate Russian journalist, who wrote: "The criminal who has revolted against society, hates it, and considers himself in the right; society was wrong, not he. Has he not, moreover, undergone his punishment? Accordingly he is absolved, acquitted in his own eyes." How much more vivid is Bon Jovi! On a steel horse, indeed! Etc.

For Howard: dude, if you want to play Warcraft, play Warcraft. You have your radio show, you're active in the community, you're raising your daughter and putting food on the table. You don't have to justify doing something you enjoy. Definitely don't compare yourself to a compulsive neurotic like me...

I was actually thinking of "I'm going to live while I'm alive and sleep when I'm dead" which you non-too-subtly quoted directly in this entry.