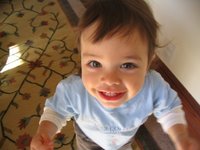 I’ve been thinking about the question of how fathers can go about, concretely (as opposed to rhetorically), constructing identities, role models, whatever, that will help liberate their sons from rigid gender roles. That sounds very antiseptic, too much like a ideological formula. To put it a different way: how can I refrain from being a jerk to women, and how can I help my son to not be a jerk when he grows up?

This is going to be a perennial topic on Daddy Dialectic; I don't have a good answer and it's not easy finding one. Let me start by describing a small incident that occurred when my son Liko was three or four weeks old, that maybe will frame the problem. The three of us were in bed. I was reading a novel. Shelly was nursing the baby, who was starting to go to sleep. Very peaceful, and I was really into the novel, The Amazing Adventures of Kavalier and Clay.

Suddenly, Liko vomited all over the bed. Then he started to wail his little lungs out.

What was my reaction to this pedestrian mini-crisis? (The like of which I’ve since gone through, oh, maybe four hundred times during the past 20 months.) I was annoyed. Really annoyed – with both Shelly and the baby, as if it were somehow Shelly’s fault that the baby had thrown up all over everything. I was reading, for God's sake!

Thinking this way – I was a twit, you see – I didn’t see myself as involved, as responsible. There’s a moment in an Alice Munro story, “Post and Beam,” that describes this stance: “Later she asked Brendan to stop so that she could lay the baby down on the front seat and change his diaper. Brendan walked at a distance while she did this, smoking a cigarette. Diaper ceremonies always affronted him a little.” I wish I could say that I don’t understand Munro’s character Brendan. Unfortunately I do, and any North American dad who says he doesn’t is absolutely full of shit. This is the mechanism fathers use to foist daily childcare onto moms: they lump the baby and mom together and position themselves as above it – like a kind of shop-floor supervisor, sitting in a glass-walled office, watching the rows of women sewing T-shirts. The supervisor says, or thinks: You’re doing this wrong; you’re not doing it fast enough; snap out of it; can’t you see the baby’s hungry?

The standard, gendered dad-goes-to-work/mom-stays-home division of labor reinforces that glass wall. Making money is part of childrearing; that entails its own sacrifices, and has to be understood and honored – but how do you smash that glass wall that a job creates, that divides men from women and symbolizes separation from children and family? In the absence of a social revolution in parenting, how do you raise boys and girls who can avoid or escape all the traps set by gender roles? I’m going to stop here for today, to be continued.

(To anticipate one comment: I'm well aware that one's wife, sleep deprived and wrung out, can turn on a single innocent comment into a snake-haired Medusa whose single look can turn you to stone – and, uh, maybe there’s some personal/political issues there? But I’m not the one to find them. I am, as they say in AA, taking my own inventory.)
Posted by Jeremy Adam Smith

Wow, Jeremy. Liko is adorable. It's nice reading an honest (and funny) commentary on modern parenthood. It's tiresome to continually hear how I will never know love unless I have a baby. I think Tom and I will be just fine!

Thanks, Lara. Hope you're doing well. Liko is adorable, isn't he? J