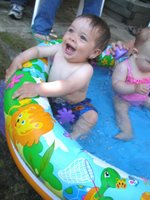 Daddy Dialectic will fall silent from now until April 4 (my birthday!), while I deal with a series of professional deadlines.

In the meantime, you can check out this article from the local Newburyport Current newspaper, which consists of a straight Q&A with two couples who decided that dad would stay at home with the kids. Both sets of moms and dads have some very wise, useful things to say. They talk about how the decision for one parent to stay home meant accepting that they would make less money: "A long time ago, we agreed that the pursuit of family happiness is more important than the pursuit of money. Will we ever be rich? No. Do we worry about it? No." They also talk about outside perceptions of the dad-at-home:

My challenges have centered around societal ideas of traditional gender roles. Initially, both my father and father-in-law were not very accepting of the idea of my staying at home with the children. I believe they either saw it as unmanly or did not believe that my new "job" was worthy. In time, they may have become convinced that it was a good decision by simply observing how well the girls were doing. In the past few years, both "fathers" seem to have changed their views of my staying at home with the kids.

There is also the issue of support from those outside the family. When women stay at home with their children, there is a large network of other women doing the same thing. Because of this, most mothers have a built-in support system. As a father staying at home and raising his children, I do not have the same type of support system.

We have lots of stories of people who have shunned Andy at the playground, or given him suspicious looks when they see him. Over the years, people have become accustomed to seeing him and the girls around town.

Personally, I haven't experienced much of that, possibly because we live in San Francisco. On that note, my next blog entry on April 4 will talk about how Liko and I arrived at the playground last week, middle of the afternoon, and found ourselves surrounded by…men. Four men playing with four toddlers, all fully or mostly stay-at-home dads. No women in sight for about an hour. What the hell? Stay tuned for explication and analysis...
Posted by Jeremy Adam Smith