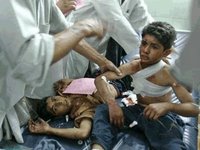 Yesterday was the third anniversary of the invasion of Iraq. Protests took place throughout North America, Europe, Australia, and Asia.

For years I've debated the practice and ethics of non-violence, mostly with myself. I don't think that at this point I could call myself a pacifist, precisely because I am a dad: I know that if my family was attacked, as a last resort I would respond with violence (feeble, ineffectual violence, probably; but yes, I would hit back with whatever weapon was available).

Yet at the same time, I can say, without any irony or doubt in my heart, that yesterday I realized that becoming a father has caused me to hate war. "Hate" - I use that word with full knowledge of its meaning and implications. In becoming a parent - especially since becoming a child's primary caregiver - I've realized exactly how helpless a child is, how utterly, heartbreakingly dependent. To betray a child's trust, or worse, to deliberately and knowingly hurt a child, is an act of true evil. That it happens every day, in ways large and small, does not make it any less evil. My words feel cliched, even dead, as I write them; I know that I'm not doing justice to my feelings.

This morning I read - in the dark, before the baby and Shelly were awake - an essay on Hiroshima by John Berger:

I refrain from giving the statistics: how many hundreds of thousands of dead, how many injured, how many deformed children. Just as I refrain from pointing out how comparatively 'small' were the atomic bombs dropped on Japan. Such statistics tend to distract. We consider numbers instead of pain. We calculate instead of judging. We relativize instead of refusing.


This is just the way to talk about war: judging, refusing.

George Bush puts on a mask of innocence and idealism: "A victory in Iraq will make this country more secure, and will help lay the foundation of peace for generations to come." (Note that future tense; but didn't he declare the mission accomplished two years ago? Well, whatever. We - all of us who gave it any thought - knew that was bullshit.)

"The construction of hells on earth was accompanied in Europe by plans for heavens on earth," writes Berger, thinking of the Holocaust. "Evil from time immemorial has often worn a mask of innocence. One of evil's principal modes of being is looking beyond (with indifference) that which is before the eyes." Berger quotes the memory of a survivor of Hiroshima:

I was walking along the Hihiyama bridge about 3 pm on 7th August. A woman, who looked like an expectant mother, was dead. At her side, a girl of about three years of age brought some water in an empty can she had found. She was trying to let her mother drink from it. As soon as I saw this miserable scene with the pitiful child, I embraced the girl close to me and cried with her, telling her that her mother was dead.

And later, in Nagasaki:

August 9th: On the west embankment... was a young boy four or five years old. He was burned black, lying on his back, with his arms pointing towards heaven.

How many times during the past three years have such scenes played out in Iraq? How many children have been burned alive? How many have seen their parents killed and been left helpless, possibly injured and dying themselves? The evil of such acts - committed in our name as Americans - is beyond comprehension. This is why we refuse to believe it, to grasp it; we get lost in policy debates, punditry, statistics. "Only by looking beyond or away can one come to believe that such evil is relative, and therefore under certain conditions justifiable," writes Berger. "In reality - the reality to which the survivors and the dead bear witness - it can never be justified."
Posted by Jeremy Adam Smith