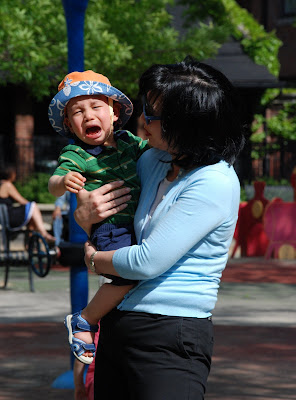 Today, the family spent most of the afternoon together at the playground. We enjoyed the late spring sunshine, Spot met a little girl with a lollipop, and mom and dad schmoozed with other parents, some known, some unknown. Back home, we hung out upstairs and got Spot ready for bed.

All together, in the course of the afternoon, my wife dropped the baby twice.

I should clarify: Spot's mom didn't really "drop" the baby, as you would "drop" a ball. She just "dropped the ball," as it were, in a way that exposed Spot to some of the more powerful forces of nature. Like gravity.

But before I get to gravity, I should mention convection. In terms of fluid dynamics, it's what makes Chicago the windy city, and the atmospheric turbulence of our continental geography is only aggravated by the presence of irregularly-spaced tall buildings. In this kind of environment, it's easy for an untethered stroller to be transformed into a four-masted schooner by a sudden gust.

This is what happened when Spot's mom decided to duck into a new popcorn store down the block. She rolled Spot up in front of the display window, full of caramel and buttered popcorn, and went in. The dog and I colonized a nearby parking meter. I noticed she hadn't put on the stroller brakes.

It took about 10 seconds for the stroller to start moving eastward along the sidewalk, more or less in the direction of Lake Michigan, rolling about 6 feet before Spot's mom reemerged. She saw it blowing away, charting a straight course for America's longest lake, and managed to grab it. I mentioned the thing about stroller brakes and schooners.

The gravity incident came much later, long after the popcorn store and the girl with the lollipop, who I have since convinced myself will be Spot's first great romance. I turned Spot over to Mom for the evening wind-down, as I do every night. A few moments later, Spot launched himself off the bed, just when Spot's mom wasn't looking, and accomplished a resounding face-plant on the carpet floor.

Wailing ensued. "That was my fault," said Spot's Mom, as the comforting began. "Yeah, it was," I agreed. I decided at that moment that, due to her poor parenting skills, I could no longer leave my wife alone and unsupervised with Spot.

The irony of this story is that, until today, Spot's Mom probably thought the same thing about me. In fact, the sum total of today's Spot damage probably puts her about even with Dad in our 16 months of reverse-traditional parenting. It was only a month ago, after all, that I gave my son a gratuitous fat lip, and a sizable abrasion across his nose, all of which he was able to proudly display, fresh and swollen, on his first day of toddler playgroup an hour later. And this because I hadn't properly balanced Spot in his backpack as I leaned him against a tree. Stuck in Dad's contraption, he fell face-forward, like a bookcase in an earthquake.

So who's the worse parent, Mom or Dad? Believe it or not, that's a question I hardly ever ask myself, because it's clear there is no answer. Despite the statistically unusual cluster of Mom's lapses today, I still have the deepest confidence in her ability to take care of Spot. We all drop the ball once in a while. Occasionally, we drop it a few times in a row.

But what did come home to me was the fact that, at the end of many days, in which the likelihood of many such mishaps presents itself, many parents will successfully prevent a lot of them from ever happening. Inevitably, however, there will be a few that get past the safety net. With another parent around -- or just another caring body -- that person may be able to spot the mishap before it happens, intervene as it's happening, or catch it before it gets too bad. And even if that other person can't do any of the above, they can stick around to help make it better.

At the very least, I feel better knowing I have some solid backup for the times when, despite all my best efforts, I drop the baby.
Posted by chicago pop

Ha...yeah, well, wait for when Spot turns three. There will be blood...

How many times have my actions resulted in injuries for Liko? Well, earlier this week I was reading to him on the bus and he was being very sweet and cuddly; at one point I looked up and realized that the many of the other passengers were staring at us all misty eyed and sentimental.."Aw, look at that great dad with his great kid..." We came to our stop..."Upsy daisy Liko..." whoops, too high! BANG! I slam his head on the handbar. Uh...everyone on the bus is looking at me again...their eyes are wide...my cheeks burn...Liko starts crying...quick, get off the bus!

My wife and I both almost dropped the baby today. And last week I walked her into a branch while she sat on my shoulders.

I think I cause more damage overall, but it was nice to see it even today.

A few month ago, my son (5) was playing on a jungle gym...He said something to the effect like "I'm gonna jump off this thing"...My reply was "Go for it...you might fly."

Sure enough he did a "Peter Pan" off the 4 foot platform onto his back...

Now I didn't drop him, but I think I aided in his knocking the wind out of himself.

After some inward debate, I took him to the U.C. to make sure he did nothing more than bounce. the doctors advice..."hey kid...land on your feet next time."

I think it happens to all of us at least once hehehehe....

He does tend to "drop himself" with an astounding frequency tho! I keek joking he's gonna be a stunt man when he grows up! ;) or an adrenalin junky like daddy!