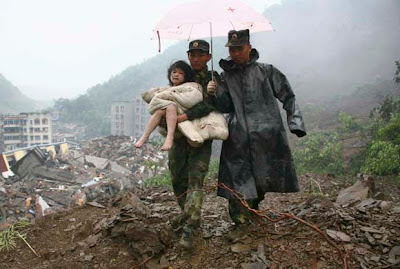 As soon as I heard there had been an earthquake in central China, I emailed my dad, who on May 12 was in the ancient capital city of Xian. It's 400 miles from the epicenter of the earthquake in nearby Sichuan Province. They said the shock had been felt as far away as Beijing and Bangkok.

In a follow-up email a day later, he shared a few more details. The buildings had swayed. Some tiles fell off the roofs of nearby buildings. All the shops had closed, and everyone came into the streets. Around the city, parents congregated outside the schools, all of which were still standing, to find their children.

Then, for the most part, life in Xian went on.

So, too, did life in Chicago. My family was intact, and my worries abated. I went upstairs, got Spot dressed, and went out to walk the dogs. The weather was beautiful, Spot enjoyed running around the playground and sitting on my lap as we went down the slide. He ate his favorite lunch of rice and tofu and complained loudly as I strapped him back into his stroller.

His life is very simple now, and because so much of my life is fit to meld with his, my life is simple, too. So it is, I imagine, for many parents everywhere, who can think of things and places and events beyond the horizon only briefly or occasionally, if at all, during the first years of their children's lives.

Yet images from the far corners of the world have the strange effect of penetrating the most distracted consciousness, of making the faraway seem next door, or of making someone else's life feel like my business; of making the moral violation of someone I've never met the source of my personal indignation, and the misfortune of others the source of my impotent frustration. 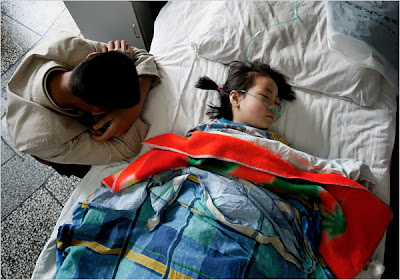 As the week progressed I learned more about the schools collapsing in Sichuan, one story after another, the numbers adding up and nowhere near the final tally, with hundreds and hundreds of children still inside. Then came the pictures, the few fortunate rescues, the many more grieving parents, and then still more parents facing the news that no parent wants to hear. I can't bring myself to post some of the pictures I've come across, of rescuers digging through the rubble of a school and coming across catacombs of children.

I can't shake these images. There have been plenty of natural disasters in my lifetime, most of them covered in the media, but not as heavily: earthquakes in Turkey and Iran, volcanic eruptions and mudslides in Central America, famines in Africa, floods around the world, many of these with higher final death tolls than what we are witnessing right now in Asia. Yet few of them kept me from sleeping at night. 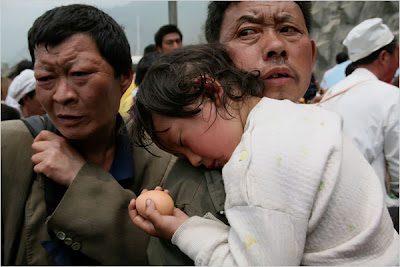 But I was not the parent of a 16-month old boy then. The parent of an only child, like so many parents in China. Now, I am a father, and these images of the schools are nearly unbearable to behold. I just can't shake them.

At first I didn't dwell, as I have when I've worried about my own death, about the last minutes of these children's lives. Maybe the identification was there someplace, overwhelmed by the egoism that joined with my empathy for the parents, who sat by the rubble with their kid's backpacks full of fresh clothes, waiting for them to come home from school.

My ailing mother-in-law helped shake me out of that empathetic egoism last night. I held Spot up to the window after dinner, 10 floors above the lake, to watch the traffic and the waves. "Imagine," she said in her deteriorating English, "a child not much older than him, maybe one who can say a few words, like Mama come. But no one comes."

That feat of emotional imagination was something that I had never performed. It's so basic, I felt ashamed it hadn't come before. It took prompting from someone who has seen much more of life than I have. But it worked. And I have a feeling that once you've had a realization like that, it never leaves you.

Unfortunately, the experience of this new dimension of empathy doesn't make it easier to sleep at night. To the contrary. And it doesn't change anything in Sichuan Province. 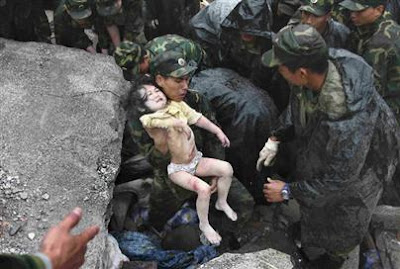 Touching and true. Thanks for sharing -- I'm going to go hug my daughter now.

Your mother-in-law's comment is heartbreaking. Thanks for sharing it.