One of two things has happened since I bought my last pair of jeans a few years ago.

Either a) I have experienced a late-onset growth spurt, in which an elongation of my lower spine has increased the distance between my crotch and waist, making it impossible to insert myself into a pair of men's jeans without damaging my genitalia, or b) the corporate couturiers at GAP have decided that I, almost-40-full-time-father-of-one, need to wear my jeans about an inch below the crack of my ass.

And so a quiet revolution has transpired: I've given up jeans. More than that: I've passionately rejected them. They can go to hell. I've switched entirely to chinos. It's not a perfect solution, but it's no longer the anatomical crisis it was shaping up to be. And it most certainly marks the end of a long, denim-clad era.

It wasn't an easy process. At the end of it, I basically gave the finger to the GAP-J.Crew-Express-Levis-Diesel global conglomerate dedicated to making men look like this: 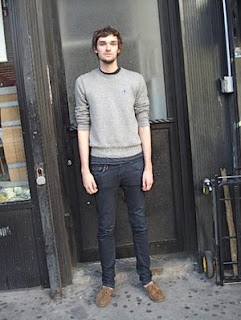 But to stick to my point: it seems to me that there is a dad jeans problem. It arises when you reach that fork in the road between low-rider/girl jeans, or boxy jeans with the capacious fly that zips up to your navel. I didn't like the choices, so I opted out of the game.

This is interesting only because it allows me to challenge the notion of mommy particularism. What is mommy particularism? It's the idea that, to paraphrase my wife, there is a certain unspoken social threshold with moms beyond which men (or dads) just can't pass, because they don't get certain things. 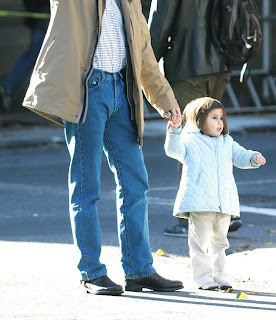 "So there's an analogy to the problem of moms and mom jeans," I propose, thinking this might help close the phenomenological gulf between motherhood and fatherhood.

"There's no analogy. You don't want to look like the guy in the picture. You're happy with your chinos. The mom doesn't want to wear mom jeans because it means she's not sexy anymore."

"But the common problem," I reply as our dialectic unfolds, "is that neither the mom nor the dad can find jeans that fit once they hit parenthood. So their fashion changes and it's a rite of passage. They're squeezed out of one style and can't stand the prospect of fitting into another."

She's still not convinced. I could have gone to L.L. Bean, I remind her. I could have walked into Eddie Bauer and come out looking like George Costanza. I could have gone for the full-comfort, baggy crotch in powder blue. Part of me still wants to. Her friends would be pulling her over and asking, "What happened?" and she would then understand the problem of dad jeans.

The controversy was settled the other day with a late-morning trip to "the mall," where Spot's mom saw for herself the reality of the dad jeans problem.

But it's not really the dad jeans problem I care about, since I've found my "third way", my chinos. What I care about is throwing another bridge between the allegedly separate spheres of mothers and fathers, comfortable in their mommy ghettos and daddy ghettos, talking about things that only authentic members of each ghetto can understand.

But the mom jeans-dad jeans problem can't be segregated.

This made me laugh and read it out loud to Marc. Would someone please kill the low rider? For everyone's sake - moms, dads, even kids. Our Kindergarten daughter's plain size 5 jeans at Target were the same way (and I purposefully steered clear of the ones covered in sequins). Everyone ends up walking around pulling up their jeans all day. Surely a genderless, even ageless, issue!

I think the thing you missed is that for most of us moms, we have to wear different jeans because our bodies changed, while your dilemma is a result of fashion changing.

Meanwhile, I actually gained weight at first, because we initially spent more time at home. (I actually think a lot of guys gain weight after becoming parents, due to a combination of less physical exercise and more settled lifestyle. But guys are as preoccupied by the change. Yes, yes, I know: the injustice.)

But during the year I spent being his primary caregiver, I dropped 30 pounds--that's not a typo. This is because we live on top of a very steep hill and we don't have a car, and I spent a great deal of time hauling my son up and down the hill, mostly in a backpack. It was the equivalent of going on a year-long backpacking trip.

But about the jeans: For a time, everything I wore looked baggy. I looked like David Byrne in his "Stop Making Sense" big suit. Perhaps as a result, I am somewhat ashamed to admit that I have embraced the "full-comfort, baggy crotch in powder blue" option, mostly for comfort, though I have tried to offset this with cool T-shirts.

In re-reading that comment (that should be, "guys aren't as preoccupied by the change," BTW), I realize that I sound like a complete dork: "...tried to offset this with cool T-shirts," indeed.

I'm obviously unfit to participate in any fashion discussion. The bottom line: I agree, kill the low rider.

for most of us moms, we have to wear different jeans because our bodies changed, while your dilemma is a result of fashion changing.

I do see your point. But I gotta tell ya', the daddy body isn't frozen in time, either. I just Googled "beer gut" and got some interesting stuff on the fluctuating state of the male physique. Maybe it's a sympathetic paunch? Anyway, women (and moms) tend not to like the beer gut, which tends to go with 'dad jeans', which tend to be the subject of ridicule, even though more and more men are getting them.

So I say we're still all in the same boat. But at least for the sake of inclusive playground chatter, I think we can all agree that the low-rider is not parent friendly (and just looks dumb no matter what age you wear it)...

I really enjoyed this post. Chuckled, I did. And those jeans photos you located, they said so so much.

There's another sartorial aesthetic that plagues The Dad, and it has nothing to do with baggy crotch powder blue pants, but rather with the non-acquisition of new clothes.

I myself, now with 2 kids, have seen my clothing purchases drop by probably 80% since I became A Dad. It's a combination of time and money - specifically, a lack of both thereof. I joke, half-seriously, about how I look forward to buying some pants once they're both in public school.

So that means I'm largely still wearing my pre-kid Jeans, but I had poor taste in jeans back then as well. But now they're tattered and torn and stained. Recently, in total desperation my wife went ahead and bought me a pair of jeans, completely in my absence. A risky move, to be sure, but at least I don't look as near-homeless as I did in my other jeans.

It strikes me though when I not-too-infrequently see the Hipper Parents in my Too-Hip Neighborhood sporting their fashionable duds, that they doth protest too much. It looks too calculated, too much a statement of "see? I'm not (just) minivan-driving Parent. I have some obscure band on my t-shirt and a chain wallet and oh, look at my tattoos!"

So I think we're all doomed to Fashion Failure once parenthood strikes.

it has nothing to do with baggy crotch powder blue pants, but rather with the non-acquisition of new clothes

I was just discussing this aspect of the problem with my wife today!

Seems like the only windows of opportunity for renewing the wardrobe come when we're traveling (stop at the outlet mall!) or when we plan an expedition ahead of time, and then it's a huge pain-in-the-@#$%. Then there's internet shopping, which clothes-wise has not been a happy experience.

Here is your issue (especially the denial part):
http://www.urbandictionary.com/define.php?term=dad%20jeans

Don't flatter yourself thinking you are wiser than the youth, I'm sure your dad said the same thing about your choice of high-waisted acid-wash jeans. You're just on your way out to pasture. Embrace it.