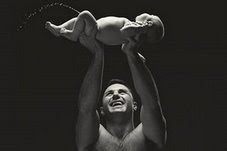 The Baby Bonding Book for Dads takes dads step by step through a child's developmental stages and suggests ways for them to bond with their children at each one. Written by husband-and-wife team James di Properzio and Jennifer Margulis, with photos (three at left) by Christopher Briscoe, this new book reminded me (once again) how much fatherhood has changed over the past century.

It's easy to take the changes for granted, and many people do. A century ago--a quarter-century ago, even--an ideological concrete barrier with barbed wire on top divided fathers from infants and toddlers. In real life, the wall was breached every day. Fathers have always cared for children. But the barrier I'm talking about was was real and it did shape men's caregiving behavior. 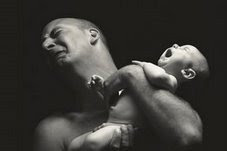 Today, that barrier is dissolving. When The Baby Bonding Book for Dads urges the new father to "take off your shirt, pick your baby up in just his diaper, and hold him," the authors are tapping a sensual dimension of fatherhood that was once taboo. This book very much assumes involved fatherhood is the healthy norm, and that's nothing but good.

This slim little book is designed to be a gift book and it is, essentially, a pep talk for new and almost-new fathers. Most of the dads reading this blog entry will never read The Baby Bonding Book themselves. But they might buy it for a baby shower, and I think they should. Remember how ignorant you were, before your child was born? We as parents know that nothing really prepares you for the experience of becoming a parent (how often have those cliched words been uttered?) but it only helps when almost-dads get tools like The Baby Bonding Book that help them to imagine themselves as fathers. 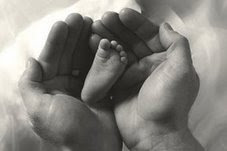 My one serious complaint about The Baby Bonding Book is that its pictures do not depict fathers of color in any substantial way. There is one photo of a visibly African-American hand holding a baby foot, and two pictures of African-American babies (one of whom is alone and the other is being held by a white father, which is interesting), and one dad who may or may not be Asian, I couldn't tell for sure. But overall the book portrays fatherhood as strictly a Euro-American affair.

I don't write this to self-righteously condemn the authors and photographer. I'm guilty of my own biases and I get called on them from time to time. Some will accuse me of just being politically correct for raising this point. To which I say: Sticks and stones, etc. We live in a multiracial America; many of us are part of multiracial families. Hell, the next President is (I hope) going to be biracial. The quicker we all start thinking multiracially, the better. It's a practical matter, and a moral one. And I think The Baby Bonding Book for Dads would have only benefited from embracing that perspective.

Otherwise, I recommend it as a gift for new dads. And you can buy it here.
Posted by Jeremy Adam Smith

The picture on top is just awesome.

re: the comment that A century ago--a quarter-century ago, even--an ideological concrete barrier with barbed wire on top divided fathers from infants and toddlers I intuitively get this, but I'm also always curious about how this kind of discourse (my preferred term) was normalized through the usual channels -- medicine, structure of work, family structures, ideals of individualism and ruggedness, all that good stuff.

Great photos. Someone re-gift this to me, please.

An extrapolation to the general culture can be made for a similar bonding with strangers, atleast on an empathetic if not sensual basis. We have denied ourselves in the possessiveness of our own emotional satiation rather than giving and sharing ourselves with others realizing the ubiquitous need for such sharing beyond the object of our desires and significant others in our blood lines.