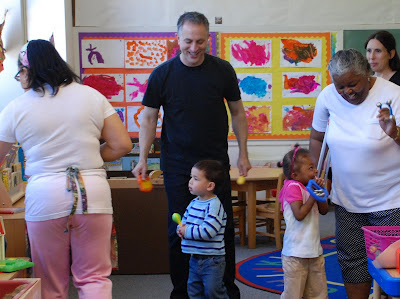 There are a lot of ways for a man to be in a group of women. A man could, for example, be taking a class. It doesn't matter what. Any extracurricular interest aside from black powder riflery, auto repair, or stock picking, will attract more women than men. Especially past a certain age.

I'm not making this up. As with all my opinions, I got this one from the New York Times. Men tend not to take classes. Women tend to be oversubscribed. In the journalistic explanation, the old stereotypes come into play: men, at least Manhattanite men, don't want to publicly learn something new. They prefer to achieve private mastery which is later revealed to the world in all it's perfection.

This is not an issue for me. So I've spent a fair amount of time with groups of women in dance classes, in tennis classes, in alpine skiing classes, and evening adult-education classes, pushing my glasses up the damp ridge of my nose every five minutes or so. And of all of these classes, the only one that came close to achieving gender parity were the pre-natal and birthing classes.

There are still other ways. A man could be working as an office temp who, because of relatively good typing skills (learned in a class, also full of women) and a degree that connotes a tolerance for spending hours in a chair, looking at computer screens, and not talking much, one could for these reasons get placed in the secretarial pool of a large corporation full of, generally speaking, women.

A man could also have an office job downtown, working for the County Clerk, the Recorder of Deeds, or the Public Library. Although the last occupational subset does not overlay the first two in the sense of yielding exposure to the white-sneaker-over-nylons-for-the-commute-to-work class, it does reliably guarantee a man at least 2 or 3 luncheon sojourns to Wendy's every week in the exclusive, or almost exclusive, company of women.

And of course, there are ways for a man to be in the company of women that I have not yet experienced, such as being 60 or 70 years old in a time of war when the vast majority of able-bodied men are either dead, damaged, or in enemy POW camps.

All this being said, however, once a man hits a certain age, gets married and has a kid or two, the already rare occasions for being in groups of women become vanishingly less frequent. When, through some freak aberration of personal life history and global economic mutation, you find yourself like me the one dad in the parent-tot class, you realize that the situation is of a different kind, with new rules, its own vibe, and that everything you thought you had figured out about how to be the one guy in a group of women gets tossed out the window.

To be continued:
Tuesday Moms and Thursday Moms, or,
Angels and Mean Girls
Posted by chicago pop

Awesome post, pop. I am a home/un-schooling dad, so although I've "graduated" from the parent-tot (read: "mother-tot") classes, I think there are even less stay-at-home dads for older kids than for the sub-kindergarten age group. I pretty much no longer attempt to engage any of the moms at homeschooling events my daughter attends, preferring instead to engage with folks who are friends first and maybe have kids.

Please tell me part 2 will explain your last sentence...that you aren't JUST in the company of women, but of WOMEN who rock the world...moms.

Part 2 will explain the difference between just being with women, and being with moms, and how this, in turn, depends on whether the moms are Angels (who rock the world!) or Mean Girls!