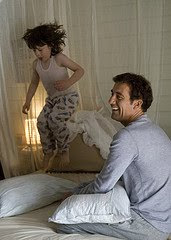 Despite his tough guy reputation, British film star Clive Owen is no stranger to cleaning up after kids. In real life, he’s dad to two young girls. On screen, he’s done diaper duty in both Children Of Men (protecting the last baby on earth) and Shoot ’Em Up (delivering a newborn amid a gun battle). His latest picture however, The Boys Are Back (released in cinemas October 8th), offers the brooding actor a new challenge: performing opposite children.

Owen plays Joe Warr, a sportswriter in South Australia shattered by the death of his wife, then confronted with the responsibility of taking care of six-year-old Artie (Nicholas McAnulty). Although the RADA-trained actor prepares for every role meticulously, playing off Nicholas wasn’t exactly something Owen could plan, says director Scott Hicks. The film-maker had his own problems: how to light a scene featuring a spontaneous and unschooled performer. Hicks chose to film using handheld cameras “to capture something that might be unrepeatable.” Owen meanwhile responded by delivering one of his most complex performances to date.

This is a Clive Owen that film audiences haven’t seen before. Unguarded, angry, and bruised, Joe Warr doesn’t have all the answers. He makes mistakes, leaving Artie and fourteen-year-old Harry (his son from his first marriage) alone for a weekend at their farmhouse. When he returns, the house has been trashed by beach revellers. Actually, it’s hard to tell whether it has been trashed, given Joe’s laidback housekeeping. When Harry arrives from England, he’s shocked at the stack of washing-up in the sink, then thrown straight into a pillow fight riotous enough to put the bed into bedlam. “I run a pretty loose ship,” says Joe, explaining his no-rules approach to Harry. “The more rules there are, the more crimes are committed.”

So evolves Joe’s credo: Just Say Yes. What father wants to tell his boy ‘no’ after what they’ve both been through? Want to skip the washing-up? Cycle through the kitchen? Drive the Land Rover through a river? Yes, yes, and yes again. So what if Joe’s mother-in-law thinks he’s drinking too much, so what if the house looks like a bombsite, so what if the moms by the school gate frown? Through giving Artie the freedom to grow, Joe too finds the space to move on.

Not just a rewarding family drama, The Boys Are Back also offers an original parenting model. Behind the Hollywoody catchphrase of Just Say Yes lies a real idea. Joe Warr doesn’t want to deny his boy, he doesn’t want to say ‘no.’ He fears, like so many single dads, that Artie will miss his mom. He fears that he alone is not enough. Simon Carr, the British political writer whose memoir inspired the story, remembers wondering what would happen to his own boy after his wife’s death. “Frankly, I didn’t know whether I’d be allowed to keep him. The idea of a man bringing up a young child was alien to the spirit of the age.”

As the plate tectonics of 21st Century parenting shift toward fatherhood, here is a big screen dad who’s not afraid to fail. Just Say Yes is neither an epiphany, nor the promise of a happy ending. It’s a compromise, a deal Joe strikes with his boys as he struggles to find his feet amid mistakes and missteps. This quirky little family remains a work in progress, albeit one whose success is simply in surviving to write its own warming story.

“Frankly, I didn’t know whether I’d be allowed to keep him. The idea of a man bringing up a young child was alien to the spirit of the age.”

I can't even imagine that prospect. Thank goodness the Spirit of the Age has evolved.

Great review, I'll be sure to check this out.