In my book The Daddy Shift, I reported research that shows men’s testosterone levels rise and fall in response to what's happening in their lives and environment. Having a child lowers testosterone; so does losing a tennis match.

Now comes a new study providing more evidence of a link between testosterone and social cues. The night to the 2008 presidential election, it seems there was a a dramatic drop in testosterone for men who voted for McCain or the Libertarian candidate, whoever that was.

"In contrast, men who voted for the winner, Democrat Barack Obama, had stable testosterone levels immediately after the outcome," says the press release for the study. "Female study participants showed no significant change in their testosterone levels before and after the returns came in." 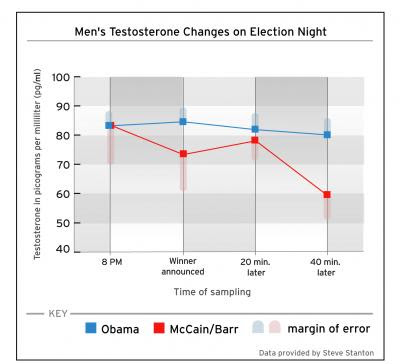 "This is a pretty powerful result," said Duke neuroscientist Kevin LaBar. "Voters are physiologically affected by having their candidate win or lose an election."

In a post-election questionnaire, the McCain and Barr backers were feeling significantly more unhappy, submissive, unpleasant and controlled than the Obama voters.

I just wanted to post a random "Thank you very much"-comment. This site helped convince my mom that men can raise children and actually be fathers. Thank you.