No hitting: The play 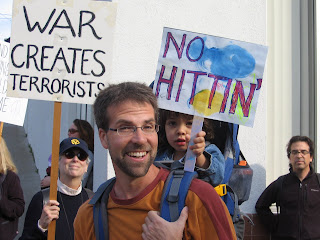 Me: Liko, do you want to go to the antiwar protest tomorrow?

Me: In an antiwar protest, people get together and they ask war to stop.

Me: Remember what we talked about yesterday? War is really terrible. Mommies and daddies and little kids like you get hurt really bad, sometimes they get killed.

Liko: Where is war?

Me: Tomorrow we are going to protest the war in Iraq.

Liko: Where is Iraq?

Me: I showed you yesterday on the globe. It's very far from here. The people there don't speak our language or dress like us, but they're people just like us and they don't like to get hurt.

Liko: Are we going to get dessert?

Me: Because you already had ice cream today. Do you want to go to the antiwar protest?

Liko: I want to be a war-guy and hurt people!

Me (flustered): What? We don't want to hurt people, Liko. We want to help them.

Liko (bashes table with his hand): I want a war-stick! [Meaning, a gun.]

Me: Because we're in a restaurant and we don't hit tables.

Me: Because it bothers the people around us.

Liko (looking around): Are those people going to antiwar protest?

Me (glancing around and feeling slightly defeated): Some of them might, sure.

Liko: What do people do at antiwar protest?

Me: We march and sing songs and hold signs.

Liko: What do signs say?

Me: They say things like "Stop the war" or "War is bad for children."

Me: OK. What should it say? 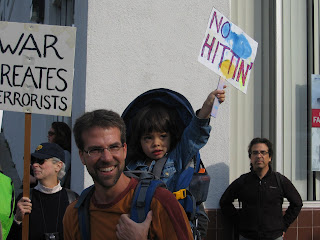 our children are wiser than us.

Nice - your dialogue together was fantastic to read. Never too early to get our kids involved in issues & the community.

Great stuff. I love the way kids have such an open mind about major issues. It makes it so exciting as a parent - you can tell them about both sides and just hope that they pick the kindler, gentler one.

I'm a stay-at-home dad who has had a lot of talks similar to that with my daughter. Thanks for sharing yours!