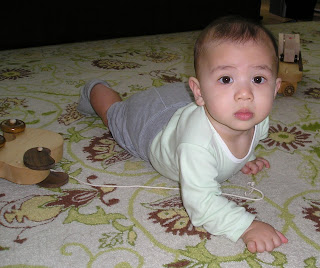 A few days before my high school reunion, I was down on the rug, face to face with Spot, watching him execute his favorite pilates routine while I sang the following lines from a Police tune:

I'm not a big fan of The Police, though I do like a few of their tunes. My dentist loves them, and if I were more of a fan, and more inclined to hang out with my dentist, I would have jumped on his offer to see them in concert last fall. But these lyrics were not idle. They were sung with a purpose. Spot had to learn his consonants.

This was my first conscious intervention in the spontaneous flow of Spot's development. It was prompted by a certain concerned look on the pediatrician's face the week before, when she had asked us if Spot was making consonant noises. "Like what?" I asked. "Like da-da," she replied. I said no, and could see that her roving intelligence immediately halted and fixed on this point. We scheduled a follow-up visit in a month's time.

So there I was on the rug, worrying about Spot's developmental progress, when a classic marker of dad's developmental progress, his high school reunion, was a few days away. Spot was a little late with his consonants and, so it seemed, I was a little off with my career. Spot made plenty of noises; quite often he whistled and sang like a deep-space radio transmitter from a 50s sci-fi movie. As for myself, I had plenty to do, and had done a lot. But neither of us, from a certain perspective, was where we "should" be.

This set of bench-mark pressures had already set in on the young Spot; it was entering its fourth decade with his father. Was I ready to face the crowds and tell anyone who asked, "I'm an at-home dad. It's my wife who makes all the money"?

I was vaguely aware that there are developmental milestones that pop up at certain intervals -- the classic Hallmark moments -- but hadn't worried too much about their sequence or rate of succession. Spot, I assured myself, was a non-conformist: he had been a breach baby, and came out four weeks early -- clearly an individual with his own agenda. Now he was lingering on his vowels before moving on to the harsher elements of language. So be it.

But despite my own and Spot's insouciance, the world keeps wanting to know how things are going, and how he ranks. "Can Spot sit up yet?" asked a neighborhood grandma after greeting us in the restaurant one afternoon. "Alvin can, and he's two months younger." I'm not usually at a loss for words, but this comment silenced me. Now it was abdominal coordination; soon it would be reading ability, and then SAT scores, colleges, and salary figures. Was there any way to not go down that road?

One of my many former therapists once told me, "Only people who consider themselves successful go to their class reunions." People, in other words, who can sit up, hold their bottle, and make consonant sounds. Strangely, I've found myself among them on several occasions, though this reunion -- number twenty -- seemed more symbolic than those previous. By now, I ought to have amounted to something. I should be holding my bottle. The difference between my situation and Spot's was that he wasn't worrying about it, and I was.

As it turned out, the reunion went well. No one -- as far as I know -- questioned what still sometimes feels like the eccentricity of my situation. I found myself in league with my former, now-lesbian high school girlfriend, revved up for a gender-bending confrontation with the world of sexual-social expectations in Middle America. It failed to materialize. Instead, I approached my own situation the same way I tried to approach Spot's -- with the exception of his consonants: we're both of us, like my lesbian ex, doing our own thing.
Posted by chicago pop