Housework vs. the Rest of Life 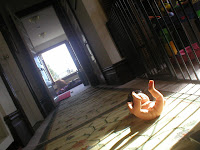 Rebeldad points to this study that says dads do about 7 hours of housework and moms do twenty-one--which is consistent with other recent studies of domestic labor.

"From a gender equity standpoint," writes Rebeldad, "it's bad that dads are lagging behind moms... but 21+ hours a week on housework--no matter who is doing the work--seems like overkill. Surely there are better ways to spend three hours a day."

Here's how I responded over at Rebeldad:

Does my family do at least 21 hours a week of housework?

Let's see: my wife and I each do about 4 hours of housework over the weekend, and I spend about a half hour in the morning and a half hour in weekday evenings doing dishes or picking up clutter. I can only guess how much my wife does during the day (most of her time is consumed with childcare/playing), but let's say at least one hour (mostly picking up toys or washing dishes), plus an additional two hours one morning a week. I'm excluding cooking, which my wife does most of.

So we're doing at least 20 hours a week cleaning and maintaining our two-bedroom apartment (that's a pic, at top, doll in foreground), and we are not neat freaks. I can easily see how a rural/suburban residence would involve more hours of housework. So I guess those numbers don't seem unreasonable to me.

But I think the key line from the source report is this one: "Girls spend more time doing housework than they do playing, while boys spend about 30 percent less time doing household chores than girls and more than twice as much time playing."

In many respects, this is the thing that needs to change. If we can equalize those hours (and there's no reason why we as parents couldn't) then we might really see equality down the road, when our children have children. For me, this is a reminder that my son needs to learn how to do housework--something that I wasn't really raised to do, and when I got to college, it showed.

After reading this post at Rebeldad, I scrolled down to see what I've been missing--and was surprised to see that Rebeldad nominated Daddy Dialectic for "best new daddyblogger," a contest being run over at the At-Home Dad site. From what I gleaned, the actual voting won't happen until the end of 2007.

That's good. Thanks, Rebeldad, and to everyone who has ever supported Daddy Dialectic by telling a friend or linking over here.

Update: After coming home and reviewing our housework hours with my wife, I have to revise my estimate. In reality, I think we do an average of about 15-16 hours per week.
Posted by Jeremy Adam Smith

Can't say I'm surprised by the numbers in the referenced report. I've been trying my darndest to up my share of housework to ensure I'm pulling my weight around the house. The measure I use, which I've found quite helpful, is that when I'm absolutely positively sick of doing housework, itmeans I'm half-way done. I force myself to do more, since, clearly, my internal "equality clock" is out of whack (as would be expected).

What do folks think about this question: what's more important for modeling Equality for children: both parents working outside the home, or both parents equally performing household responsibilities?

I'm curious what others will have to say in response to your question; I bet some people will want to reframe it. For now I'm going to just think about it and then respond over the weekend.

There needs to be a term for the continuing disparity in spousal housework division -- the Laundry Ceiling, perhaps?

I think my wife and I have a pretty even division of housework. (Perhaps she would disagree, I don't know). But what's interesting is that in the 13 years we've been together, we've fallen into patterns as to who does what tasks. I almost always do the laundry. She almost always cleans the bathroom. Dishes and cooking are fairly evenly split.

What's more interesting to me is how easily we've fallen into certain gendered patterns of, not how much each of us does, but what we do. This contradicts our values and our politics, but tracks our gendered upbringing (both in households that were not especially traditional in their gender roles, interestingly). For instance, I do all the "fix it" type tasks -- i.e. anything involving tools, standing on a ladder, etc. I also pay the bills and balance the checkbook (although that hasn't always been so, such as when I was in grad school).

I wonder what message we will send to our sons (who are too young to notice yet). Yes, they'll see that Dad vacuums and cooks and does laundry -- but what will they make of the fact that he also is always the one with the saw or hammer? Or doing most of the heavy lifting (literally, not metaphorically).

I don't think my wife is itching to grab the power drill out of my hands and fix a broken drawer, but it makes me uneasy how easily and unquestioningly we've adopted these gendered roles in certain tasks.

So in addition to the housework gap, we need to consider the division of tasks by gender and what message that sends to our kids.

I'm reminded of the wise words of "Free to Be, You and Me" about housework (after promising the kids that they, too, will hate housework someday, just like their parents):

"Little boys, little girls,
when you are big husbands and wives, if you want all the days of your lives to seem sunny as summer weather,make sure when there's housework to do that you do it together!"

Sometimes I sure wish I had someone to split the housework with!

As for Justin's question: I don't think you *have* to have have both parents working outside the home to model equity for children, as long as your family values the work that the stay-at-home parent does.

I think it's important to have all family members (including children) visibly involved in keeping up a household. When I was growing up, my family had a list of chores we divided up, so we could see that everyone was making a contribution, and we sometimes had family meetings to fine-tune the division of labor. I think just talking about trying to make things fair and equal goes a long way towards making children conscious of this issue.

I like Chris's comments about tracking who does what and valuing the work a stay at home parent does, although I think in terms of creating a more equitable society, that's not enough. I think many (not all) patriarchal fundamentalist religious folks strongly value work they define as mommy's work, or at least say they do; the problem arises when women try to step out of those roles.