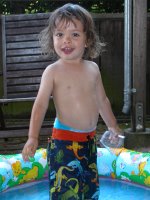 The Broadsheet blog at Salon.com comments on a feature in Sunday's SF Chronicle about stay-at-home dads:

"I came away feeling like any article that praised moms who stayed at home in the same terms would get absolutely pilloried for trying to send women back to the kitchen," wrote one Broadsheet reader. "Also, the dads interviewed seemed to feel like they could get away with saying things that I felt would be very controversial coming from a woman's mouth."

Our reader is referring to quotes like this one from Wayne Wilson: "I don't want my babies to be raised by anybody else." The Broadsheet reader continued: "I mean, if a stay-at-home mom suggested that a working mother was not raising her own kids, but having someone else do it, it would be yet another bomb thrown in the 'Mommy Wars.'"

Why, the reader asks, is it "cool when men stay at home since it's opposite their traditional role, but it's lame and antifeminist if a woman does it?" For many people, this is a confusing question. Is Linda Hirshman right? Should we renounce childrearing as unworthy and all get to work?

For a very, very long time, and still in many places around the world, it was/is compulsory for women to stay home with babies, an arrangement enforced by custom and sometimes law. Women, went the theory, ruled the domestic sphere, men the public sphere.

Feminism busted that down, and feminists urged women out of the kitchen and into the public sphere, both in work and political life. The result was a social revolution; by almost every measure, feminism was spectacularly successful.

Good, as far as it goes. Women got more freedom and more power. That was stage one of the revolution. It meant putting a lot of kids in daycare; a whole generation. Many kids were raised that way and they turned out just fine. But the dual-income family also created a lot of contradictions, more for the parents than the kids. Many parents grew dissatisfied. Why should any of us, male or female, be slaves to work? Why should someone else have the satisfaction of raising kids? What's so bad about raising kids anyway? Screw the politics, it comes down to this: I love my kids and I miss them and I want to see them raised by people who love them.

So now we're in stage two of the revolution. Women's economic and political power has grown; many women have more career potential than the men they partner with. When such (relatively privileged) couples have kids, they can make decisions based on what they want instead of what society says they should want. Couples come up with many different arrangements, depending on the circumstances of their lives. It's a hard time, in some ways, without well-defined roles and paths, and sometimes with a lot of economic instability. This describes a condition of freedom.

So for now, a man proclaiming that he doesn't want his babies raised by anybody else, and he's going to be the one to take care of them, is risky and revolutionary in the same way that a woman doing the opposite was once revolutionary.

That a few feminists like Linda Hirschman don't get this is just sad; history is passing them by. They're fighting the battles of the Sixties, but it's the 21st Century. "The biggest problem with American feminism today is its obsession with women," writes my buddy Lisa Jervis, founder of the magazine Bitch: Feminist Response to Pop Culture and editor of the forthcoming book Bitchfest. She continues:

Yes, you heard me: It’s time for those of us who care deeply about eliminating sexism within the context of social justice struggles to stop caring so damn much about what women, as a group, are doing. Because a useful, idealistic, transformative progressive feminism is not about women. It’s about gender, and all the legal and cultural rules that govern it, and power—who has it and what they do with it.

A transformative progressive feminism envisions a world that is different from the one we currently inhabit in two major and related ways. Most obviously, this world would be one in which gender doesn’t determine social roles or expected behavior. More broadly, it would also be one in which people are not sacrificed on the altar of profit—which would mean universal health care, living wages, drastically reduced consumption, and an end to the voracious marketing machine that fuels it.

Lisa is sketching out the next stage of the revolution. For those of us who have chosen to have children, we need transformative, progressive, feminist values that are consistent with our desires and the realities of our lives - and I don't know about you, but my desire is to be close to my family and take care of my baby.

Horribly, the Right, especially the Religious Right, has gained ground by capitalizing on desires like mine - but they argue that the answer is to go back to the good old days of patriarchy and get women back in the kitchen. According to their ideology, a person with a penis is simply not supposed to have my desire. For many guys of my generation, right-wing "family values" make no sense. For all the noise and their rise to political power, I think it's too late for the Right. History is passing them by, too.

The only way to go is forward, into stage three - when, hopefully, men and women can raise children in a context of equality. We need a 21st Century vision of the family. Many of us are already living it.
Posted by Jeremy Adam Smith

that generation "raised in daycare" was also mostly cared for when at home by mothers. As that slowly changed; as more women moved into better paying, more demanding jobs; as job security diminished. This is for the best and prepares us all for parents making the choices that are best for their individual families. Sometimes it will be in the family's best interest for mother to be the primary care giver, sometimes the father, sometimes equitble responsibilities with or without out side help (paid or family). This is all for the good. If only we could get it to come along faster.

And in order to move into this next stage, we need to change our institutions. Right now, for example, health care is almost always tied to a full-time job. So parents are faced with the idea that one of them has to work full-time. If health care was something offered to every citizen, then parents could go for other options, like each parent working part time and sharing childcare responsibilities.

"If health care was something offered to every citizen, then parents could go for other options, like each parent working part time and sharing childcare responsibilities."

You know, my wife and I tried this exact arrangement (she works more hours than I do and is fortunate to have a unionized part-time teaching job that provides full health care) and I must say that it was extremely difficult to maintain. We faced constant time pressure and logistical nightmares of various kinds; but critically, we also just stopped spending any time together as a couple, with me starting work before they were up in the morning and my wife not getting home until just before baby bedtime. The result was constant slow-burning anxiety.

This might be a good arrangement for certain couples, but it's not really working for us. My wife is off for the summer; we're evaluating what we're going to do come September and I'm interviewing for jobs. For our family, it might better for one of us to work full-time while the other stays home (although that'll be broken up by two days of preschool, which is a good thing). I'm sort of thinking that maybe it's my wife's turn to stay home.

I'm not disagreeing with you, just sharing my experience.

The both parents working can be draining. My experience was my husband being a fulltime student and working 4 10-hour graveyard shifts at a 24 hour convenience store/gas station while I was a halftime student and working fulltime days in higher education support services(which provided health insurance and other benifits) and only parttime daycare for our 2 children. We did not have a lot time together and neither of us got anywhere near enough sleep.

This was after my husband had spent a year as a SAHD and primary caregiver.

Well, for us the issue is resolved: yesterday I accepted a full-time job (as an editor at the Center for the Development of Peace and Well-Being at UC Berkeley). Poof! I'm no longer a stay at home dad and now it's my wife's turn to stay home -- actually, she's still thinking about whether she wants to go back to work. I hope she doesn't; I want her to have time with the boy.

I feel...strange about the whole thing. I'll try to blog on it sometime in the next couple of days.

Gathara: Right on. Becoming a stay-at-home parent dramatically changed the way I viewed "the 'advantages' men enjoyed and women were denied" -- I came to see staying at home as a privelege and a gift rather than a trap. Of course, anything is a trap if you're forced to do it, through indirect or direct pressure... but a parent being forced to go to work (by ideology, need for health care, whatever) is every bit as bad. Hirshman et al. send up a false opposition betweeen obligations to society vs. to family. A really progressive vision of the family will cut through that: raising great kids is one way we help make society a better place. We need social policies that will support that instead of pushing us all into a Darwinian labor market.