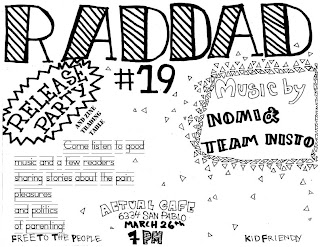 Note: we will have a Rad Dad Release Party on March 26th at 7pm at Actual Cafe in Oakland. Please come say hello and pick up some copies of Rad Dad (and other zines - there will be a zine table), listen to two bands with papas in them (Team Nisto and Nomi), and hear a few radical parents read!


Parenting has taught me a lot about dealing with things I’d rather not deal with. I’ve been forced to breathe deeply and make the call to the doctor at three in the morning: um, my daughter won’t stop crying, and when the doctor asks why she’s crying, I’ve had to confess, well I kinda dropped her on her head today.

That never feels good to admit to.

Or I’ve had to clench my mouth shut tightly and just let my daughter have her feelings, be disappointed, resist the urge to placate her, to try to “make” her feel better by saying something inane like, well your little ten year old friend who won’t share with you is a jerk.

I’ve also learned to deal with larger, seemingly inhuman bureaucratic systems such as the institutionalized schooling with all its rules and policies that seem to believe learning only takes place in a classroom. No, I don’t think it’s fair that my seventh grader gets an F in classes because I took her on a trip to see a sick relative. I’ve learned to face a police and justice system that views children and particularly teenaged men as criminals first and foremost.

Parenting, however, has also demonstrated that there are the choices we need to make between letting some things slide while focusing on others.

My daughter, arriving home ten minutes later than she said she would, might be ok now and then. I can raise an eyebrow and shrug off her, what, the bus was late, exasperated remark when I ask why she’s not on time. Because when she’s out at night and forgets to call when I explicitly explained that I expected her to, that ain’t something you can let slide. It’s something you have to address, and it’s difficult to hold her to the agreed upon consequences. It’s painful to hear her anger, her frustration, to be the target of her unmitigated teenage rage. And that shit’s scary.

So parenting has taught me how to stand firm face difficult situations and also that some things are negotiable, that there’s a balance between holding your child or your community accountable and creating transparency in your agreements. However, this is not an essay about my children.

A friend of mine was arrested for domestic violence. There’s a story there. There are reasons for his anger and even empathy around the whole situation: towards him, towards his partner. The whole affair is sad. In the end, perhaps it will all be for the best for both of them and their kids.

But there is no excuse for violence in a relationship.

The crisis is over. She’s moved out of their home. They have a routine set up. Things are almost back to normal. People in my circle of friends are even joking about it.

And that is what bothers me, what makes me uncomfortable.

I started to ask around: what is my role in all this now? How do I address this with my daughters and son? How to be a true friend?

I don’t want to be the one to constantly bring it up every time I see him, but I also don’t want a ‘business as usual’ type friendship, a ‘don’t ask, don’t tell’ relationship because that is so much easier: pretend it never happened.

I remember when the Chris Brown and Rhianna incident occurred. I immediately talked to my kids about it, especially my youngest daughter who was very into both of them. I asked how they felt about hearing the news. I didn’t want to let this opportunity slip: a chance to address the unacceptability of domestic violence, to establish a clear ‘zero-tolerance’ policy.

Some things can slide; physical and emotional abuse can’t.

But what to do with my friend? Why did this feel so much more difficult?

Soon after all this happened, I spoke with another friend of mine, a woman, a person who had been in an abusive relationship in the past, and she gave me some advice I hold dearly now. She said when she was going through it, that she wished people would have done something, anything. She looked at me and stated: sometimes doing the wrong thing is better than doing nothing.

I understood immediately that that was why I was so uncomfortable. I could see how easy doing nothing could have been. Denial is powerful. But as parenting has taught me some things can’t slide and so sometimes you just gotta grin and bear it. You have to face it.

I knew I needed to talk to him before he moved off the block, so one night when he came over to borrow something, I did.

We stood out on my stoop, and we talked. First I expressed my anger and disappointment. I told him I knew it would be work, but that I wanted to be the kind of friend who is wiling to both stand up for someone and to hold them accountable. I expressed my concerns about how he was taking responsibility for his actions.
I did however acknowledge that I had no answers, only questions. But I told him I’m willing to struggle to find those answers with him, together.

We hugged, and he left.

A few days later, I raised the subject again with my daughters and my twenty-year-old son who was visiting. He heard all about it from his mom and his sisters. Everyone was arguing over it. Gossiping about it. In fact, my youngest daughter and I saw the cop cars in front of their house when it happened and I said to her almost in jest, I hope that’s not what I think it is. I cringe thinking about how uncritical a statement that is in regards to domestic abuse.

So we were all sitting around the table, my two daughters and my son eating dinner. I confessed, I am angry that I don’t know what to do or say. I feel like a hypocrite ridiculing Chris Brown, and yet when it happens on my street I’m at a loss as to what I should do. Just because I’m a friend with someone doesn’t mean they’re not accountable, you know.

My youngest daughter shook her head and said finally, you know it’s not your fault dad, as if I was acting foolish.

Getting chastised by your kids is another thing you learn how to deal with from parenting.

I know, I said, I just don’t want to sweep this under the rug.

I realized I haven’t had a conversation like this with him ever. As a man. As a person who might disagree with me, who might not see it the way I do. I was terrified.

My son breathed in deeply.

I know dad, he said I know, and he looked me in the eye, that shit is totally fucked up.

Not the most eloquent response, but it was clear that he meant it.

It was one of the most reassuring moments in my life. It’s strange to love this young person so much, and for years feeling like I could control or at least strongly influence his actions. Now he stands taller than me, muscular, lean, a man, and I have no control over anything anymore in his life (well, except for kicking in money for his rent), and yet I still have such expectations of him. And he may let me down in the future, may make mistakes in relationships. But one thing I think he knows is that domestic abuse is a line you don’t cross.

Hearing him say that with such conviction, without equivocation in front of his sisters was a profound moment for me.

As the weeks pass, I still bring it up with my daughters now and then. In fact, now, my middle child has a boyfriend. I see how quickly I will have little control in her life as well. It’s hard to let go. But I’m gonna do it. With love and with encouragement and with trust.

They taught me that.

I will not let things slide anymore and this is a lesson I dedicate to all those who are victims of violence: from the batons or gun barrels of the police, because of the words and intimidation of bullies, or even at the hands of their own family.

I promise you I will never look the other way.

I promise you I will do something whether it’s the right thing or not at the time.

I promise. I will.
Posted by tomas, editor rad dad zine

Sadly there often is not a better. In my experience I've never had a relationship survive this sort of experience. I would think your friend will be gone soon. I've also never gotten the truth any time a marriage or domestic relationship has turned violent. Every party involved lied. Big lies, small lies, but lies all the same, and lots of them.

If you truly have a zero tolerance policy, which is not a bad thing, then you have burned that bridge. He can never be right. You have nothing left to offer.

In writing this I realize that I'm ambivalent about your premiss. As a rule I would tread softly around the idea that doing something wrong is better then nothing. My rule is that it is easy to make something worse and very very hard to make it better. And, even if you make things better, it was at what cost to you?

Tomas some great stuff here. I think being a dad is like looking in the mirror day after day. Sometimes you look good, sometimes not so much. But every day you are seeing yourself, warts and all. And those kids, well, in the end they are what get you through. They have their own spirit, their own way of growing and developing and miraculous surviving even the most grievous of mistakes. To me a lot of it comes down to judging ourselves less harshly and realizing that we don't control as much as we think.

I wrote something along those lines as it relates to how I was brought up here: http://bit.ly/maninaboat

Thanks for making me think this morning!

thanks for the comments:
rtb.ink - i agree but i think the idea at least for me is that doing nothing because you're not sure what to do doesn't solve anything...and by doing something it might be simply asking is there something i can do...
and
thomas -- i'll check out the site and i am always looking for pieces for the rad dad zine...
tomas