Cold Weather Parenting; or, For the Love of Snow 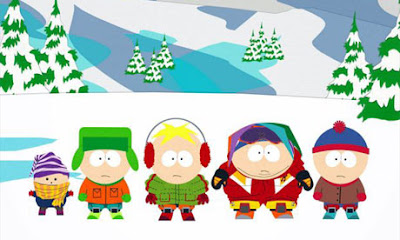 People don't complain about the fact that they will eventually die. The same is not true of taxes or the weather. Though immortality remains a dream, the earthly draw of the next best thing -- a sunny locale, tax-free and with yearly lows around 65°F -- remains powerful for those who feel that more spiritual satisfactions are unattainable. Thus the popularity of such strange places as Arizona and Florida -- a desert and a barren swamp -- not just for retirees, but for those who seek to trade the certainty of death for the hope of a painless earthly transit; to trade a snow shovel and jumper cables for the tax-deferred serotonin boost of high-volume sunshine. The post-orgasmic lull of uniform, indistinct seasons stands as a questionable rebuttal to the wisdom of Job, or a defensive denial of what Melville knew as the cosmic significance of anything powerful, vast, and white -- like a really big whale, or a howling blizzard.

We do not trade in sunshine futures, Junior and I. We attend to the fundamentals of making a life, the way factories used to make things, where it makes most sense to do so. We take what comes with, and let it infuse us with the energy and beauty and dynamism of all the changes that accompany a planet's traverse around the sun.

We are adventurers of the polar season that visits our city once a year. This is our story.

********
My son was born on a particularly cold and clear day in January. One of the first instructions I was given as a father came from a nurse of the maternity ward, concerned that my child might freeze to death because I had chosen to sit close to a window while holding Junior against my chest. "Of course a man would sit next to a window with a newborn baby!" she said, only half jokingly.

Since then, I have learned that the kinds of drafts one does indeed encounter near windows in winter are the subject of a global folk mythology that, at the extreme, equates cool breaths of air with demons and malevolent agents of the Evil Eye. A cool breeze to the neck can trigger mononucleosis; chilly droughts on the chest, bronchitis; an improperly swaddled infant, vitamin B-12 deficiency and improper brain formation.

But the nurse in the maternity ward had a point. Ferociously cold January weather with below-zero wind chills is an inhospitable environment from which a newborn must be sheltered. My goal as a new father, moving about snow-bound and often glacially cold neighborhoods, was to provide a cocoon of warmth and protection, an environment so stable and secure that only the changing shade of light inside Junior's stroller, or the muffled sound of Daddy's profanations from deep within the hood of his snorkel jacket, might indicate that we had passed into and out of a rampaging storm of sleet. 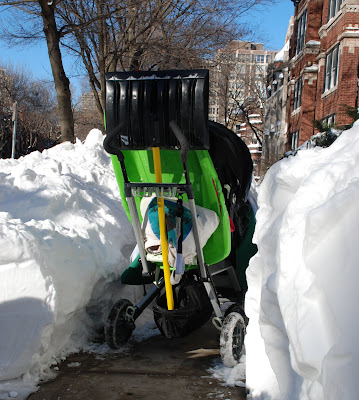 I should state here that the only excuse for "being cold" is "being stupid." Survival, and even enjoyment and triumph in winter weather is fundamentally a question not of the weather itself, but of the gear used to render the weather irrelevant. In the early 21st century, even the cheapest winter clothing is very warm, and at the higher end, quite stylish. Providing the cocoon necessary to keep baby warm is a technique of winter parenting that extends to the parent as well. Yet, while Junior is toasty and warm and romping on the snowdrift above the buried and abandoned Yellow Cab, yon 20-something office drone goes hat-less for fear of matting his gelled hair -- though he may be wearing one of these, the bikini of men's winter head ware: 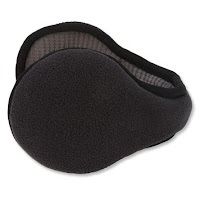 As I say, said office drone may be clenching his red and bared fists as he leans into the wind making its way from the Arctic Circle and down the middle of LaSalle Street. In his free time, this same fellow and his friends can be seen hailing the same Yellow Cabs on Clark Street, wearing little more than imported Polish Fonzi jackets and blue jeans that have the property of transforming from soft denim to chafing sheet metal at around 32 degrees. These hardy fools -- and I know, because I was one -- lack the most basic wisdom of any cartoon character from South Park: that you must insulate every inch of your body in appropriate gear, and get used to spending most of your time that way.

As much as I enjoy the seasons, I will not deny the grueling exertion demanded by the wet, sloppy snowstorms of late February and early March. The snow dropped in these gales, unlike the powder that falls at colder temperatures, blows horizontally into your car and soaks everything it touches. Pushing a stroller through the pools of slushy ice (the scientific term: "frazil ice") that fill all the inconspicuous depressions in streets and sidewalks, sometimes even entire intersections, across which the cocoon must be not pushed but lifted, can be exhausting and wet enough to compromise the most weatherproof boots. Junior, in his cocoon, is oblivious to these dramas, and once home the parent wisely chooses to remain there. Junior is still napping heartily at this early stage, meaning that, as he snores through the winter blast, it is possible to read much great literature.

As Junior enters the toddler stage and becomes correspondingly more mobile, I begin to entertain hopes, as all upper Midwestern fathers do, that he might come to enjoy what winter has to offer. The prospect presents twin advantages: of being able to share the animal and aesthetic pleasures of bracing air under brilliant skies, snowball fights, the transcendent beauty of snow-covered landscapes, and the mysterious silence of a snow storm in process, as well as being able to kill bad cases of cabin fever by simply getting out of the house.

It is an understandably slow and awkward process, so shortly out of the womb, his Edenic nakedness so recently covered, for Junior to encumber himelf with boots, a hat, mittens clipped to a huge poofy jacket or even bulkier snowsuit, all over at least two and probably three layers of clothing and sometimes topped off with ski goggles. Each item is resisted. And so we negotiate, as Junior's second and third winter seasons wear on, each of these items, occasionally assisted by Junior's own animal intelligence alerting him that HEY! it really is better to wear your gloves when your fingers get cold!

But alas, even at the height of winter #3, it is all still too foreign, too messy. Our first sled ride, more dad's idea than Junior's, ends with a debacle: a child spilled on the curb, snow going up the nose, and tears coming from the eyes. "I don't like snow" is the motto of this period, and Dad resigns himself to a routine of indoor activities along with all the other parents: soccer class, various bookstores, caffeinated museum trips, play-dates, and the local super-heated tot-lot in the company of all the nannies. The hearty naps continue as before, and still more great literature is read. 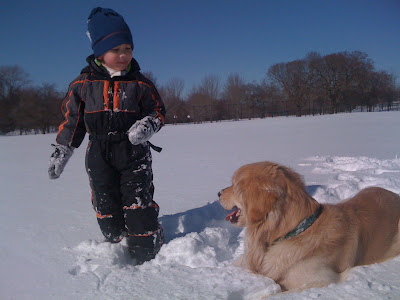 Junior and Fellow Snow Enthusiast
It is in the current, fourth winter that the breakthrough occurs, and Junior, to the great joy of his father, discovers his own joy of snow. In December and January, he begins to kick at the snow with his boots, to make patterns with his tracks. He watches with keener curiosity as the more adventurous child of our friend climbs a pile of snow thrown off the street by city plows and citizen shovelers, layered with last fall's matted leaves and gravel and laced with streaks of blue Slurpy-colored snow melt, and sticks his head into the snow to better dig at it with his tongue. Not long after that, he tells Daddy, "I want you to teach me how to ski," and Daddy, with a borrowed pair of Junior-sized Nordic skis, complies.

I began by completely shielding Junior from winter; now it is his playground. I feel fortunate that I have the energy to lift him to the top of the six foot snowdrift that has buried the Yellow Cab, to shove his sled over the edge; a passing woman, looking for her own car buried in a drift still further on, tells me it is Junior who is fortunate to have a father who will go play in the snow with him. She flatters me. It is no work at all. We all know that what you once loved as a child, you can never fully turn away from.

[A version of this post is also available on the Outdoor Baby Network.]
Posted by chicago pop