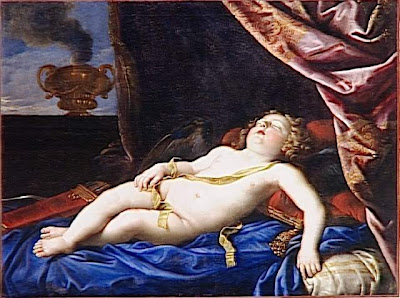 "The first crying of children is a prayer ... They begin by asking our aid; then end by compelling us to serve them. Thus from their very weakness, whence comes, at first, their feeling of dependence, springs afterwards the idea of empire, and of commanding others."

When my wife took a long vacation from work so we could all spend more time together, our family went through a strange regression. At the end of this transition, I had emerged as a slothful Patriarch, presiding over a career-woman-turned-harried housewife, who was herself now answering to every beck and call of an infantilized preschooler.

Our family had become, in other words, the opposite of what it had been before my wife took her sabbatical.

The transformation was driven by our son, who quickly revealed himself to be a rogue monkey with every intention of completely overturning the social hierarchy. It began when he demonstrated a strong preference for Mama during her first week or two at home. At first, this made perfect sense to me: Mama is a working woman and Spot doesn't get to spend as much time with her as with me. I was sympathetic, since I liked having her around, too.

But I had no idea that this shared desire, as expressed by my son, would launch our family unit into an unwitting sociological experiment, the sort of thing that might have been inflicted by scientists on hapless and undeserving primates in the 1950's, or by media execs on equally hapless but much more deserving humans on a reality TV show.

Falling to the bottom of the social ladder, though shocking, was not necessarily new to me. It had happened in catastrophic fashion at the beginning of 7th grade, and thereafter with smaller aftershocks in the years leading up to college. So although I wasn't emotionally devastated as I had been in 7th grade, I recognized what was happening. I was getting pushed to the bottom of the pack hierarchy. Lower than Grandpa, maybe even lower than my brother-in-law, and probably about on par with the dog. I was denied high-fives and daddy-hugs. I was bummed.

This was disturbing, of course. It was an injury to my self-love. Or so I thought, until I realized that in truth it heralded my liberation. For, as I was being spurned, my wife was being enslaved. She was shackled by Spot's preference for Mama. And for the first time in nearly four years, vistas of freedom opened up before me, of Rabbits running on Updike-like getaways, or of simpler, more local bouts of laziness. It was my one and only chance, in the artificial circumstances of my wife's sabbatical, to don the mantle of pater familias, Patriarch, Godfather, master of the kinship clan.

A few posts back, I described an earlier expression of this atavism. Little did I know then that it provided a foretaste of what was to come:

I descended the staircase one morning to be met by the same Oedipal glare that my father must have known well. In a bath of soft light before me I saw the heartwarming scene of a mother, dressed for work and feeding breakfast to her son, holding a boy in a puppy-covered sleeper with puppy ears flopping off the side of each foot. Yet this boy, shattering the Norman Rockwell charm of the scene, frowns when he sees me, and raises an accusatory, pointed finger into the air.

Although he had since learned to sheath the knife of this raw Oedipal hatred, he immediately took advantage of Mama's sabbatical to demand her services not just for breakfast, but for dinner as well. "I want Mama!" became not just a breakfast demand, but a cry uttered to ward off Daddy whenever he approached. But this preference soon turned into imperialism. Mama had to be the one to draw the bath and wash him. Mama had to help him with the potty. Mama had to brush his teeth. Mama had to carry all 37 pounds of him up two flights of stairs. Mama had to come sit with him on the couch for yet another episode of "Ni Hao, Kai-lan." Mama had to handle every case of crisis management.

Spot's relationship with his Mama has always had this potential to regress towards infantile dependency. This doesn't surprise me, since I had the same problem with women well into my 20's. But now it was evolving into sheer despotism, something I had never managed to achieve. I realized this when Spot began telling -- not asking -- Mama to pick up little things that had fallen off the couch and onto the floor. When Spot began saying things like, "Mama, I want YOU to pick up the block!" that was six inches away, we both knew it was time for her to go back to work. In the meantime, there was nothing for me to do but lie back on the couch, pop the button on my jeans, and flip on the game. Aside from being on-call as in-house Bad Cop, my time was now my own.

I thought I might finish all sorts of projects, paint a few rooms, and get started on the novel I've been meaning to write for 20 years. In reality, seeing the hours and days of my wife's sabbatical consumed in the service of a tyrant marooned me with guilt. I couldn't help her -- Spot wouldn't let me -- and I got nothing done for myself. Looking back, I can't say that Mama's sabbatical was relaxing, or that my temporary position as default patriarch was terribly satisfying. But we were all together more often than usual, and we wound up packing quite a lot of activity into that one summer month. Looking back on that time now gives me the pleasant feeling of having richly lived.

So what does it all mean? Short answer: All is flux. The lust for power resides within us all. Patriarchy is really not all that enjoyable if you like an emotionally engaged relationship with your child and have any respect for your partner.

Long answer: Emotions don't obey contracts, not even 50/50 co-parenting contracts, or more exotic reverse-traditional ones. They ebb and flow and shift around, collecting around one person for a while before melting away and collecting more closely around someone else. Spot's shift in preference was only as abrupt and extreme as the sudden change in our domestic routines. And by the end of Mama's sabbatical, his attachments had begun to even out again. He let me carry him, and we picked up some of our exclusive father-son routines again. My brief stint as Patriarch, as close to the real thing as a weekend re-enactment is to the Battle of Gettysburg, was nonetheless close enough to reassure me that such a role was not for me.

Spot clearly has a different relationship with both of us, tending ever so slightly towards dependency with Mama, and ever so slightly towards imitation and competition with Daddy. But there is plenty of dependency on Daddy, and some imitation of Mama, too. So I really can't say with any confidence that our particular arrangement has affected Spot's emotional preferences one way or another, or that he will "bond" with either of us because one of us happens to leave the house in the morning while the other does not.

It is with Spot's emotional attachments as it is with subatomic particles: the likelihood that they will be there over the long run is more certain than the existence of a singular, passionate attachment at any one point in time. A few months of breast-feeding in infancy, or one ten-day fishing trip in adolescence are probably not, in my opinion, enough to guarantee a bond one way or another over the course of a lifetime. The hours, days, and years of effort made to sustain the existence and happiness of someone else stand a far better chance of doing so.

This is something I remind myself during those stretches when I am not the "favored" parent, and -- when I'm not feeling like a favored spouse -- something that probably applies to marriage as well.
Posted by chicago pop

Even after just a year as a dad, I couldn't agree more that "all is flux." My girls' grandparents are always trying to essentialize them, and I just kind of nod, knowing that next week "Mama's girl" might be "Daddy's girl," and "the thoughtful one" might become "the wild one."

This is an insightful post. We often think of the parental division of labor as something that the parents set, which of course it is to a large degree. But we forget that the kids are a factor, and that their needs, desires, behaviors can shape the parents' minds and behaviors as well.

"The lust for power resides within us all. Patriarchy is really not all that enjoyable if you like an emotionally engaged relationship with your child and have any respect for your partner."

I've got two young daughters and write to you from the whirlwind of their lives just now. My firstborn is 7, her sister is 3. They've got different mothers.

The mothers have been friends since before my youngest was born. I have a close and warm relationship with my firstborn, and she has been kept respectfully out of our adult negotiations.

We've been calm and plainly aware that we would know each other closely (for better or worse, in fact) all the remaining days of our lives. A family.

The firstborn's mother is a busy administrator and not one for flights of fancy. The younger of my children has an otherwise-also-working feminist blogger for a mom -- one of keen analytical ability and great sympathy.

Reading your blog today and really related and appreciated your thoughtfulness. Thank you!