We Remember! On the Eve of The Oscar Grant Verdict 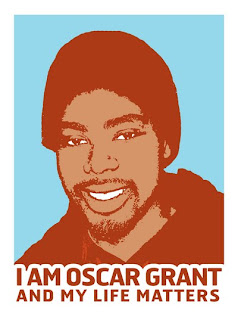 It was an accident that I hopped on the wrong train heading back to the East Bay lost as I was in the gallery of Sunday characters riding BART: tourists, hipsters, workers, and young teens. I smiled at them especially, the teenagers, excused their loudness, their energy. I imagined my teenaged daughters and son acting a little crazy just like them on the BART.

As we slipped past West Oakland station, I began to close my book, gather my belongings, but when we pulled into the Lake Merritt station and not 12th street I was confused. I realized I had boarded the wrong train. On or off? I couldn’t decide in time, and the doors closed.

No biggie; I’d just get off at the next stop. Which was Fruitvale.

I froze right there.

The skyline swept into view as we emerged from the tunnel, late afternoon sun spilling over the port of Oakland, serene and blinding.

It hit me then: Fruitvale BART station, the place where Oscar Grant was murdered.

His murder has stuck with me since it happened on New Year’s Eve 2009. I have been to vigils. I have facilitated discussions in classrooms and at Rad Dad readings. I have refused to forget for the last year and a half now the violence that is consistently perpetrated on the youth in our society. Especially youth of color. Especially young men.

But I have not come to where it happened.

The train hummed to a stop and I stepped off. The platform was empty, barren, almost peaceful. The geography was familiar. The cement walls. The red tile flooring.

Immediately, those bumpy, pixilated cell phone images come to mind, and then the noise, the chaos.

There were kids along those walls.

There were cops strong-arming and stomping back and forth.

There was Oscar Grant pushed face down on to the ground.

Then, there was the shot.

Standing in the Fruitvale BART station, I couldn’t help but feel my chest well up with such emotions, such sadness, such anger.

I searched for the spot thinking there must be a memorial: candles, pictures, flowers, something.

But there was nothing.

No sign to mark the spot, no image to bear witness. Everything wiped clean. I wonder what is left behind?

I walked the platform.

Soon, the first train heading my direction arrived. Two young men stepped off, laughing, holding cell phones to their ears. They nodded at me and walked to the stairs.

I was alone again and felt that I should do something.

But then I saw it; someone had written something in black sharpie, on the railing.

I remember this as I, like so many in the Bay Area, await the verdict that will most-likely come out in the next few days. Initially, I was nervous, but still sure that justice would be served. Nothing could bring back Oscar Grant, nothing could give his daughter her father back, but at least a message would be sent to other officers of the law.

Now, I am not so sure this will happen.

I don’t know how I will respond to the verdicts. I fear the police are all too ready to subdue, to quell, to brutalize.

But they will not scare me away.

One thing I do know is that my daughters and I will be there with other people in downtown Oakland the evening the verdict is released.

I know we will not forget.