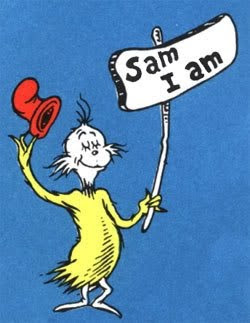 On Wednesday I sat on our bed, fully clothed, reading Green Eggs And Ham out loud to my one-year-old son, and wondered how it had come to this. That our bed was now for getting Sam to sleep, rather than for nookie.

He gets to choose two books, then I pick the third. The third book needs to end with sleep, so that he’ll get the message that it’s afternoon naptime. On Wednesday, he picked out Green Eggs And Ham, a classic, and not only because the main character is called Sam-I-am. The real Sam grunted and shifted positions, managing simultaneously to unbalance himself and put a heel into my groin.

“Careful, Sam.” There goes my shot at a second baby.

We even kissed the other day. Not me and Sam. My wife Fitzsimmons came back from work and looked cute in her new jeans and we had a little snog in the hall. And then she broke away, hair all muzzy, and checked her watch.

“How long has he been asleep?”

“An hour and forty minutes.”

“Ahh.” She smiled, forlornly (he never sleeps for two hours). I smiled too, though it was the smile of a trapped Chinese miner who wants a drink but gets a picture of the mine company president.

Sam reached forward and started to help me turn the page, then tried a swivel-flip to reverse off my lap.

“Hang on, Sam. Do you like green eggs and ham?”

Now that’s what I need. Sex served up on a platter. Instead, I’ve got seven hours of childcare after barely six hours sleep. By the time Fitzsimmons gets him to bed in the evening, she’s shattered and I’m already thinking what 5 a.m. is going to feel like.

Last week I read a chapter in one of these parenting books, all about two parents’ sizzling sex lives. Probably not with each other, the snakes. How they were constantly hopping on and off the washing machine, or the sink, or the dishwasher. A washing machine would really make my life better. I think I’d rather take that, on balance.

Who are these people, who have the energy and time to get their leg over, while the baby sleeps? Haven’t they learned the perils of procreation? Wasn’t once enough?

“We did not do it in the house.

We did not do it with a mouse.”

Sam flailed his arm and elbowed me in the stomach. He didn’t seem sleepy, and this was book two. Book one had been Frederick, about a poet mouse who told stories while the other mice humped corn and grain back to the burrow for winter. Sounded too close to my own situation for comfort.

When does the sleep thing change? Fitzsimmons has been angling to get a sleep consultant for weeks now. Someone super at diagnosing infant sleep problems. I can see it now, the wise old lady coming in and doing psychological feng shui on our living situation.

“Ze baby must sleep facing east (all therapists must have German accents, even the feng shui ones). Turn ze crib that way. Ze muzzer must sleep in an adjoining room. You, you are ze fazha? You need more sex.”

No, the word bar is not in this legendary American children’s story, but the old ham-and-eggser doesn’t always do nouns in couplets. And besides, not only do we not own a car, but we’ve only been out for one drink in nine months – one pint of Anchor and a small Hefeweizen, please. Total time away from baby? 42 minutes.

“We did not do it in the rain.

Jesus. Stop with all the transportation, Seuss. Seven hours, childcare… you do the math. No cars, no trucks, no trains. I need energy, space, time to shave so I look almost presentable. And for my wife to stop worrying over our kid for long enough to put on her fancy underwear.

We did not do it with a goat.”

No boats either. Although, we did once take a Croatian overnight ferry from Dubrovnik to Rijeka. That was fun. No goats though. There’s always something missing.

What’s with the green ham and eggs, anyway? Green bacon is the closest I’ve come to this cartoon breakfast. Although nothing in America seems to age – endurance milk, long-suffering sour cream, astronaut cheese – I grew up in a British house where food had to be savagely rotten not to be eaten. My mother would scrape the mold off the marmalade and say, “Perfectly alright.” Which was how I came to eat bacon that had a silvery green sheen, like the wings of a pigeon which has seen better days.

Sam yawned and didn’t bother turning the last page. In five minutes, with some coaxing, he should be asleep. His namesake, Sam-I-am, was now in the ocean with the unnamed grinchy character with the stovepipe hat, surrounded by boat, goat, fox, box, mouse, bar, and washing machine. The green ham and eggs were dripping, but still intact on the platter.

He’s so persistent, Sam-I-am. Maybe that’s the lesson for parents in Green Eggs And Ham – just keep showing up. I picked up Sam and put him in his crib, then buttoned him into a rather Seussy sleepsack with blue and green stripes. He grumbled a little, then slumped into a downward-facing pigeon pose. I stroked his back until he fell asleep. Behind me, our duvet was strewn with Sam’s colorful books and Fitzsimmons’s cotton pyjamas. I sat down on the bed and tucked the pjyamas under a pillow. Perfectly alright.

Aw. Good luck with the sex life. And the sleep training. It's a rough road.

Tracey Hogg is good, modifiable, not too hard on the parent or child. Look for the last book, the one about babies and toddlers.

The most subversive reading of Dr. Seuss I've yet to come across. :)

This is probably cold comfort, but even though our one-year-old twins are champion sleepers, our milk-stained bed is still used almost exclusively for child feeding/entertainment and adult sleeping.

Even if it's not really fair or entirely accurate, at least you can blame the drought on your kid.