Liko and I spend a lot of time researching space and spaceships on YouTube. Unlike Simon, I don't feel much guilt about this--I really do think our YouTube watching is educational. But like all the best education, it's also fun. Take this video:

Stirring, isn't it? For Hunakkah this year, we got Liko a scale model of the Saturn V. The cool thing about the model is that it breaks into all the stages, until only the command module remains for splash-down on our rug. So on lazy Sunday mornings, as we watch this video we'll act out every stage of the Saturn V's journey to the moon, and back. 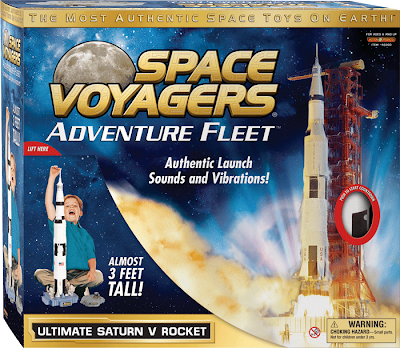 I'll use each part of the journey to explore some different scientific fact or idea: orbits, gravity, rocketry, planetary formation, water on the moon, and so on. I'm no expert on this stuff, and so we'll often take side-trips on YouTube or Wikipedia to learn more. However, in the course of our quest for knowledge, we have taken some wrong turns:


2. The International Space Station as seen from the outside:

Liko actually gets bored with this after the first five minutes, but he does find those first five minutes fascinating.
The Space Voyagers Adventure Fleet also offers an International Space Station kit, which enables you and your kid to closely follow the tour and explore the solar panels and the functions of the different modules. Bonus: the kit includes a small Soyuz for docking!

Fun activity: use boxes and paper and kitchen appliances to build your own Mars rover. (Interested in Mars? This vid about Mars colonization is cyptofascist fun.)

For an explanation of what it is you're hearing, see this NASA page. When Liko heard this, he said, "It sounds like music. Daddy, is there an orchestra inside of Jupiter?"

Recently, we've been learning about the Russian space program. I haven't yet found a definitive Soyuz video, but it's always entertaining to watch these cannonballs crash into the earth:

Those cosmonauts are brave as hell.
Posted by Jeremy Adam Smith

Dude, Now you've made me waste an hour watching all the vids you posted. I hope your satisfied with yourself.

I've never had a big issue with TV being educational. I learned more from PBS and National Geographic specials back in the 70's, when I was a kid, then from school. People get way to caught up in the media and forget the message. I cringe every time I hear parents and teachers going on about so & so kid being a great reader. Not every kid likes to read. So What? Every kid should have useable reading skills, and be able to do long division, and fix a toilet tank, change a car tire, cook a decent dinner etc etc etc.

Instead of making sure kids have a rounded skill set and some sort of moral compass so then they can make decisions and make themselves happy, after we're all old and dead, your kids should outlive you, we focus on a few competitive advantage skill sets. Skills that are an advantage for what competitions the parents care about. My kids aren't going to live my life they are going to live their's.

Check out the top 10 chemistry and physics videos on Wired Science. I really love the water bubble on the ISS. Little ones won't get some of it, but it's wonderful to see what they do get, and how they will point out the phenomenon in the real world when they see it again. It effects and clarifies their world views. God didn't do it, at least not directly, it was gravity, or heat or what have you.

I named my boys Neil and Alan (after the astronauts) So I completely understand the whole space fascination thing :-) Love the videos! Good educational value.

We watched the Apollo 11 Remix last night. Roman got a little upset when the ascent module lifted off. I said don't worry, the astronauts are in there, they are going home now. He wanted to know about all the machines they left behind on the moon. He said the machines would be lonely.

I need to show this very informative post to all my kids. I am sure they will enjoy watching those very education videos. Thank you for making this kind of useful post.