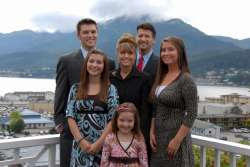 Sarah Palin is turning out to be a Rorschach test. The inkblot in question is not her, but rather her entire family as a symbol of a century of family change. She’s a working mother; her husband is a former stay-at-home dad; her teenage daughter is pregnant; another daughter her sister is going through a messy divorce; and so on–all phenomena that were relatively unusual or, in the case of stay-at-home fatherhood, nonexistent fifty years ago. And I betcha there's a gay or lesbian relative in there somewhere.

It goes to show at least two things: 1) All the conservative “Family values” in the world can’t reverse the social and economic changes that have brought nontraditional families like Palin’s into existence; and 2) Identity is a fluid, flexible thing.

Obama has fought hard to avoid becoming the “African-American” candidate, in part by stressing his multicultural heritage; in contrast, when Hillary Clinton started positioning herself as the “women’s candidate,” her campaign nosedived--I'm not sure if the appeal to identity politics was a symptom or a cause of her campaign's demise, but there's definitely a relationship between the two facts.

Both campaigns represent a step forward for African-Americans and women, but one of the measures of their respective successes is the degree to which they appeal to multiple constituencies. Not only that, but the degree to which their respective constituencies feel free to disagree with the candidates and support other candidates. It's diversity, not unity, that represents progress.

In nominating Palin, Republicans are playing a slippery game of identity politics, not one that they are good at. For that very reason, I’m glad they picked her. Her candidacy isn’t just another step forward for women; it’s also a way of highlighting the dominance of nontraditional families in America today. If the Republican Party can survive the ideological contradictions represented by Palin's family, I think America will be a better place.

A clarification: It occurs to me that that last line could be misread. Ideological contradictions--namely, in this case, the conflict between the Republican Party's rhetoric on the family and the reality of actual Republican families--could destroy the Republican Party, and that would be fine with me. What I mean is this (quoting myself, from the comments below): we can best measure our progress as a society by what's happening in its most reactionary corners. There will always be people resisting social change--voting Republican is just one way to do that--but it's instructive to see what changes they are resisting. From that perspective, Palin's pick shows how far we've come. The thresholds are moving in a good direction.
Posted by Jeremy Adam Smith

I'm just going to point out that I think it's Palin's sister who was/is going through a messy divorce. The rest of the post was preaching to (this particular) choir...

Whoops; I corrected that. Thanks.

Where does everyone keep coming up with this idea that Todd Palin is, or ever was, a SAHD? There is nothing in his profile to ever suggest he was a SAHD.

Well, of course, I don't have first hand knowledge of this, but my understanding from various news reports is that he took a period off from work after his wife was elected gov to take care of the kids, but later returned to work for financial reasons. It's also my understanding that he is taking time off for the duration of the campaign, primarily to manage the family end of things.

Jeremy: I liked your initial reaction to the Palin pick; I'm a little more skeptical that it represents a step forward for women, at least in more than a token, riding-on-the-coattails of history kind of way -- especially the way this pick happened, with an aging Prince Charming swooping in and creating a Princess out of a very obscure politician in what conservatives like David Brooks and Andrew Sullivan admit is a bald play for undecided Clintonistas.

Tenured Radical puts it nicely, when she asks, is Sarah Palin good for women? (the rest of this post echoes your thoughts on the diminishing saliency of identity politics):

The Palin nomination may be good for some women, particularly Republicans who have ambitions for higher office, but in the terms I am arguing, not good for most other women. It's hard to tell, and hard to care, because a Republican victory in November (which I think is unlikely) will be bad for the poor, and bad for those who are not poor -- including women -- who suffer from structural inequalities and have nowhere to go for help, given that there is now a pro-business majority on the Supreme Court. A United States without national health insurance will be bad for women; a prison system that is Hoovering up black men and warehousing them for generations can't be good for women; badly crippled and mentally traumatized veterans with no health insurance will be bad for women, particularly when they are women; schools that think they are making children more capable through rote learning and testing will be bad for girls who are becoming women; welfare policies that offer no route for improving yourself aside from getting married will be very bad for women; assuming that sex just works itself out after marriage, and that normal humans are content to wait for a committed monogamous relationship to have sex, has historically been bad for women; taking children away from mothers because they are lesbians is really bad for women; teenagers having babies they can't afford and don't know how to raise will be bad for girls and the women who are their mothers and grandmothers. And so on. Pick your issue: I can tell you why Republican policies are bad for most women. And Sarah Palin isn't going to change that.

I actually agree with Tenured Radical. In another place in the same post, s/he answers the question of whether Palin is good for women this way: "My answer, less direct than you might like, is: Yes. I Suppose. And No. Not Really. And -- Good For Her! Let's Crack Open A Cold One!"

Which I think sums it up. Palin is interesting because she's such an ambivalent figure, for both left and right, and she provokes ambivalent feelings. And I continue to adhere to the notion that we can best measure our progress as a society by looking at what's happening in its most reactionary corners. By that standard, Palin's pick shows how far we've come. The thresholds are moving in a good direction.

But nothing I write implies that Palin's actual election to office would be good for women... or men, for that matter. I hope she and McCain and their whole dreary washed-up mob go down in screaming defeat.

Don't worry, I get where you're coming from ... I think it's a very good idea to step back and see the cunning of history at work -- I mean, see the selection of a female VP for the Republican ticket as a sort of historical milestone. It suggests that, on social issues, at least, progress in some sense means that certain things no longer matter. Like skin color. From my perspective it's much less important that Palin is a woman, than that she is still a shill for Big Oil (though not above digging into their treasure chest), hawks Big Oil's line on climate change while her state sinks into the rising Arctic Ocean, wants to drive biotech innovation and disease research out of the US by opposing stem cell research, and has no idea what the hell the "surge" is.

When McCain's handlers start dealing with these issues, instead of keeping the family/sexism spin going to their advantage, we'll see how unimportant gender really is to people's voting decisions, and the fact that only the right wing base cares about all this Palin family drama; we can then contemplate what happens when selections are made on the basis of the gender criterion alone.

OK, that's my rant too. Back to baby.

cunning of reason, I meant. See what happens when I try to cut back on my coffee consumption?

Actually, he took a leave from work to avoid perceived conflict of interest, then decided he didn't care! But maybe he took care of kids while mulling over this dilemma?