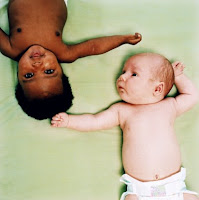 Earlier this week I was sitting with four-year-old Liko watching teenagers play pick-up basketball in our neighborhood. This is a regular thing with us; Liko loves watching basketball.

"Daddy," he asked thoughtfully, "why do only black kids play basketball?"

My heart skipped a beat and my stomach clenched with anxiety. I looked around the court: In fact, there was one young red-headed white girl and one middle-aged white guy, which I pointed out to him, but otherwise, yes, all the other players were black kids. (For the record, I should note that I'm white and my son is a mix of Caucasian and Asian ethnicities.)

My split-second reaction was to panic. But I also instantly remembered an essay I had just helped edit for Greater Good magazine -- "Rubbing Off," by child psychologist Allison Briscoe-Smith, is part of our special issue on the science of prejudice.

In the issue, we explore new findings that show how our brains seem to be hardwired to notice and react negatively to racial difference--but we go beyond that to also explore strategies for overcoming prejudice.

Briscoe-Smith's essay explains how kids learn about race and how their parents can foster tolerance. It's a terrific article and my personal favorite in the issue: concrete, specific, and useful.

"Do kids even see or notice race?" asks Briscoe-Smith. "The answer is yes, they see and notice racial differences from a very young age, even in infancy." By the age of three, she writes, kids will start sorting themselves into racial groups.

But Briscoe-Smith urges parents to not see their children as instinctive racists: "For children under the age of seven, race—or, rather, physical traits like skin color, language, and hair texture—are just signs that someone is in some way different from themselves, similar to gender or weight. It's not unusual or unhealthy for kids to gravitate toward the familiar so early in life. Kids' views only become prejudiced when they start linking these physical traits to flaws in character or behavior. We adults are the ones who ascribe malice to simply noticing racial differences." She continues:

So in and of itself, recognizing racial difference is not a cause for alarm—quite the opposite, in fact. For years, studies have found that children who recognize these kinds of differences from an early age show a stronger general ability to identify subtle differences between categories like color, shape, and size—which, in turn, has been linked to higher performance on intelligence tests. Researcher Francis Aboud has found that children between the ages of four and seven who show this advanced ability to identify and categorize differences are actually less prejudiced. So parents, rest assured: When children notice and ask about racial differences, it's a normal and healthy stage of development.

Whew. Remembering that lessened my anxiety about tackling Liko's question.

But how to answer him? Briscoe-Smith notes that many well-intentioned parents opt for a policy of silence on the subject of race. "They assume that if they raise their children not to recognize racial differences, they'll prevent them from becoming racist," she writes.

Unfortunately, while parents are saying things like, "Look at the pretty boat!" in an effort to distract their children from the topic at hand, the kids are still noticing race and forming their own ideas on the subject--or getting their ideas from messages in the world around them.

"Instead of trying to ignore race, research suggests that parents should be more pro-active," writes Briscoe-Smith. She continues:

They can tell their kids it's OK to recognize and talk about racial differences while still communicating that it's wrong to hold racial prejudices. My own research with 67 racially- and ethnically-diverse families, all of which had children under the age of seven, indicates that talking and answering kids' questions about race may help them understand racial issues and become more tolerant. I found that the children of parents who talked more about race were better able to identify racism when they saw it, and were also more likely to have positive views about ethnic minorities. This was true for both the white families and the families of color in my study....

So parents, next time you're on a playground and you hear your child say something that seems racially confused or even offensive, don't be embarrassed. Don't scold or shush. And don't end the conversation with, "We don't say things like that." Instead, you might want to try, "Hmm, why don't we talk about that some more?"

The entire essay is well worth a read.

Liko looked at me and he expected an answer. I took a deep breath and said, "Well, it looks like a lot of black kids like playing basketball! Do you want to play basketball with them when you're older?"

Then he said: "Can I have an ice cream?"

And that was that. (Though I really need to read an article on how to say, "no, you can't have ice cream right now," in a way that doesn't result in wheedling or weeping.) In the moment, I felt somehow inadequate, like I had missed some great opportunity to, I don't know, plant the seed that will result in him one day becoming a perfectly tolerant human being.

But in retrospect, I see that I was just being a stupid adult. He was asking a simple and reasonable question, one of about two hundred he asked me that same day. But it put me on alert: There will be more questions on race in the future, and they may be a lot tougher. I hope I'm up to the job.

[This was originally posted to my Mothering magazine blog.]
Posted by Jeremy Adam Smith

I've never felt that race is something to be ignored in front of children, or adults for that matter -- no more than sex, or religion, or evil in the world, or the fact that the Chinese dominate the sport of table tennis.

The subject comes up from time to time on a neighborhood parenting listserve that goes mainly to grad students and young (white) parents; the same worry comes up, with the general advice from the PC crowd being to act like skin color (or any physical difference, really) doesn't exist.

A black acquaintance of mine logged on after one such discussion and remarked that of course skin colors exist, and no one wants to feel invisible because someone choses to overlook a part of their identity.

I recommend Barack Obama's first book, "Dreams of my Father".

It's really amazing how he had to deal with race as a perpetual outsider almost. I think his story has something for everyone.

Really nice post, Jeremy. Like yours, my children are Asian/Caucasians and they know they look a little different. We read "The Colors of Us" and "All The Colors of the Earth" quite a bit in an effort to spark conversation about the fact that, indeed, we do not all look the same. Nice, simple stories that my four year old enjoys.

I agree with others that you chose the right response. This reminds me of a question that we will need to address in the future. Not only will we have to respond to the race question, but we will also be asked the "why do I have two daddies?" question. I can only hope that my parnter (husband, actually - not quite used to that term, yet) and/or I will be as quick on our feet when the inevitble happens. It is funny and amazing the things that go through our minds in a split second.

I was blindsided by a comment about race from my son when my son was 4 also (he is 6 now). Happened at swimming lessons the first time he had ever seen a black swimming instructor (I am a swim instructor and he has been around pools since he was a baby). I am afraid my initial reaction was not the best (like I said - I was blindsided) but discussions that we had later that were spurred by that initial comment were really good. Hopefully when a similar observation comes from my now 2 year old I will have a much better initial reaction.

This is a great post. I wonder if weight should be treated similarly - my 3.5 year old son asked the other day, "Why are Grandma's legs so fat?" (in her presence) and I had no idea how to respond. His grandmother gracefully said something like, "Different people are different sizes." I felt really embarrassed, but maybe I shouldn't have.

Hi, I just found this website and it's really got a lot of great information. My daughter has just started going to pre-school (she's 3 1/2) and lately she's been saying things like "I hope my new teacher is like us (white)" and after seeing some black girls at school she looked at me and said "we're beautiful, aren't we Daddy". I have no idea where she came up with this as my wife and I never have said anything like this to her before, and never will. When we ask her about where she even heard the term "black people" she changes the subject. This has me very worried indeed as I don't know how to best deal with this without confusing her more! Does anyone have any insight?

I think (restating what Allison says in her article, which everyone and their grandmother should read) that the first thing for parents to do is to remain calm and treat kids' questions as natural. If your daughter is noticing race, that's not a bad thing.

Obviously, it's problematic that she seems to be setting her own race above others'.

But this doesn't necessarily point to something that will become a lifelong pattern, and I think her comments should be seen in the context of kids' stuff. My son is always coming up with crazy hierarchies ("Yellow cabs are better than red ones, right, Daddy?").

The other thing is to be persistent and model clear thinking on race. You won't win the battle in a day, so you shouldn't put pressure on yourself to right all the wrongs of the world in one conversation with your child. So if she says, "We're beautiful, aren't we Daddy?" you can just say, "We're all beautiful, honey," and then move on to the next topic.

One proactive thing I've done with my son is to talk to him about the different continents of the world (looking at our globe at home) and how people look different depending on where they came from. This is actually easy in our family, since we're multiracial--for example, we've read some kid's books about China and talked about being part Chinese, and I've talked with him about how my great-grandparents were French, English, and Native American, and we've traced our family origins across the globe. And we've read some books about Africa, and talked about that.

Finally, I think we also have to really create opportunities for our kids to interact with kids of other races, even if it's awkward and choreographed. It can be as easy as making it a point to visit playgrounds in black or Asian neighborhoods, or as complicated as picking a school based on its diversity. Either way, helping them to learn to interact with people of different races is a critical skill to have, as important as learning to read, in my opinion

Great essay. I have certainly noticed this tendency of race-based exclusion on the playground with my own son. I'm glad it's something parents are beginning to look at.

Thx for this great information that you are sharing with us!!!