It's an empirical fact that fathers are comparatively rare in children's books — when economist David A. Anderson and psychologist Mykol Hamilton studied 200 children's books in 2005, they found that fathers appeared about half as often as mothers. Mothers were ten times more likely to be depicted taking care of babies than fathers and twice as likely to be seen nurturing older children.

No surprise there, of course. Moms are still the ones most likely to be taking care of kids and there’s no point in nursing a sense of grievance over the invisibility of fathers in children’s books.

But where does that leave families who don't fit the traditional mold? And how does that help parents who want to provide caring role models to their sons?

There are books out there, few and far between, that depict dads as co-parents and primary caregivers. In an effort to find them, I consulted bookstores in San Francisco as well as my local children’s librarian.

My list is not exhaustive; these are only the ones I can recommend, and there are many titles I found online that I wasn’t able to read in real life. And because these kinds of books are so rare, I’m willing to bet that there are plenty out there that few people know about.

I look forward to reading your own suggestions!

My list is arranged according to target age, from youngest to oldest: 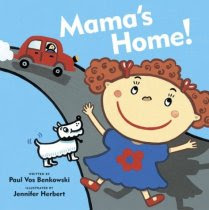 Mama’s Home! By Paul Vos Benkowski, illustrated by Jennifer Herbert (Chronicle Books, 2004; ages 1-3): I bought this board book, which tells the story of a stay-at-home dad and toddler waiting for mom to come home from work, for Liko when I was taking care of him. It turned out to be a genuine comfort for him to read (over and over!) in the hour before his own mom came home from work, and he delighted in the simple, fanciful storyline: “Is that Mama? / No, that’s not Mama….that’s just a pirate ship.” Strongly recommended.

Kisses for Daddy, by Frances Watts and David Legge (Little Hare Books, 2005; for ages 1-5, I’d say): This is a simple, lightweight picture book with bears, whose title pretty much says it all.

The Complete Adventures of Curious George, by Margaret and H.A. Rey (Houghton Mifflin, 1941-1966; ages 1-5): Is the Man with the Yellow Hat the equivalent of George’s father? If not that, I’m not sure what he is. 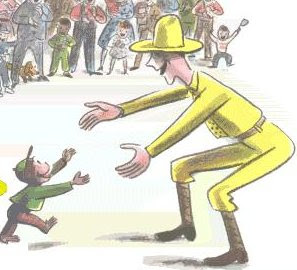 Daddy’s Lullaby, by Tony Bradman, illustrated by Jason Cockcroft (Margaret K. McElderry Books, 2001; ages 2-5): Dad comes home late from work and sings a lullaby to his baby. A very tender book, which shows a working Dad in a caring role.

My Dad, by Anthony Browne (FSG, 2000; ages 2-5): With one or two lines of text per page, the goofy pictures dominate. Dad (in a bathrobe, PJs, and slippers) engages in various fantastical adventures, from jumping over the moon to singing opera with Pavarotti. Silly and sweet.

A Father’s Song, by Janet Lawler, paintings by Lucy Corvino (Sterling, 2006; ages 3-6): A simple, somewhat solemn verse story about a father and son’s day in the park, beautifully illustrated.

Mama’s Coming Home, by Kate Banks, pictures by Tomek Bogacki (FSG, 2003; ages 3-6): Similar to Mama’s Home (above), a solid and heartfelt portrait of a reverse-traditional family in action. Dad and the kids clean up, cook dinner, and set the table, as a parallel narrative shows Mom trudging through sleeting rain and New York subway stations on her way home from work. Especially recommended.

Knuffle Bunny: A Cautionary Tale, by Mo Willems (Hyperion, 2004; ages 2-6): Why is this story such an instant classic? There's something about Willems's tone, pacing, and combination of words and pictures that kids think is tons of fun, and I confess this is one of the books I most look forward to reading to Liko. Don't miss the sequel, Knuffle Bunny Too. Willems's daughter shares a name with the protagonist of his books, and these stories feel like mini-memoirs, depicting a dad who shares life with his growing little girl. 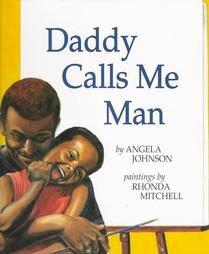 Daddy Calls Me Man, by Angela Johnson, paintings by Rhonda Mitchell (Orchard Books, 1997; ages 3-6): Dad doesn’t actually appear until near the end. And yet I think every previous page points to that moment, as a little boy paints a picture of everything that’s most important to him.

Papa, Do You Love Me? By Barbara M. Joosse, illustrated by Barbara Lavallee (Chronicle Books, 2005; ages 3-6): A father in a Kenyan village tells his son how much he loves him. This is a lovely book; the images in the words might be even more evocative than those in the pictures.

Tell Me One Thing, Dad, by Tom Pow, illustrated by Ian Andrew (Candlewick Press, 2004; ages 3-7): Dad reads Molly a story, but she’s not sleepy yet. She asks to hear one thing he knows about polar bears, crocodiles, and so on; at the end, Molly tells Dad things that she knows about him. This is a gentle, unusually paced, and interestingly illustrated story.

And Tango Makes Three, by Peter Parnell and Justin Richardson, illustrated by Henry Cole (Simon & Schuster, 2005; ages 3-7): This picture book tells the somewhat-true story of Roy and Silo, two boy penguins in Central Park Zoo who shacked up together and adopted a baby penguin of their own, named Tango. And Tango Makes Three isn’t a boring “message” book that tries to teach your kids to be tolerant. It’s genuinely fun for kids to read. Gay dads might also want to check out Daddy’s Roommate, by Michael Willhoite. 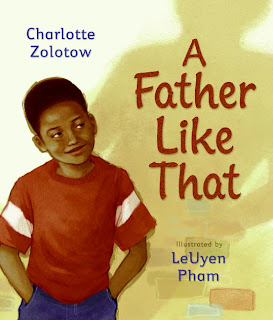 A Father Like That, by Charlotte Zolotow, illustrated by LeUyen Pham (HarperCollins, 2008; ages 3-7): This picture book is actually about a boy who doesn’t have a father, but fantasizes about all the things they’d do together if Dad was around. In the end, his mom assures the boy that while he might never have the dad he wants, he could grow up to be the father he imagines. Yes, it’s somewhat depressing, and yet I think this could be a great Father’s Day gift for boys who really don’t have a dad in the picture. Single moms raising boys, take note.

Finally, for older kids, I’d like to mention Danny, Champion of the World, by Roald Dahl, illustrated by Quentin Blake (Knopf, 1975; ages 8-12): “When I was four months old, my mother died suddenly and my father was left to look after me all by himself,” says the narrator, Danny. “There was just the two of us, my father and me.” This is a beautifully told, amusingly imaginative, politically radical, and profoundly emotional tale of a son’s devotion to his father and a father’s devotion to his son. I read this out loud to my 3 year old. He followed the story and liked the characters and incidents, especially the bit when 9-year-old Danny drives a car. However, the plot is driven by the father’s desire to poach a rich man’s pheasants, which was too far outside of Liko’s experience for him to find it interesting. But this book is an outlaw classic that older kids (boys especially) may find evocative and thrilling.
Posted by Jeremy Adam Smith

Great list! Can't wait to read them to my boys. Thanks!

Excellent choice of lists! :) And I have read your profile, I admire dads who choose to stay at home or work at home. My husband is the same, he believes that staying home with the kids is very important in the early years of our children.

Thanks for sharing this.

This thing bugs my partner too - he reads the bedtime stories and yet almost none of them are about fathers. He likes this book for littlies (2-3yrs approx) because it is about a father and his daughter (I think it is a daughter, can't remember really, the characters are mice) - "I Love You Always and Forever" by Jonathan Emmett and Daniel Howarth. Gullane Children's Books (UK), 2007.

"Guess How Much I Love You" is also a really awesome bedtime book; it features "big nut brown hare" and little nut brown hare," and although you can assume the big rabbit's the ad, it's not stated, so it's flexible. It's a sweet book.

Two additions off the top of my head:

Pete's a Pizza by William Steig is a wonderful book about a father who helps his son out of a funk by initiating and playing a silly imaginative game with him. Actually, fathers do pretty well in Steig overall.

The Little Bear books (not the ones by Else Homelund Minarik, but the newer ones by Martin Waddell & Barbara Firth) are about a relationship between Big Bear and Little Bear, both explicitly male and in what is clearly a parent child relationship (and a completely loving and beautiful one, I might add).