The Zen of Strolling 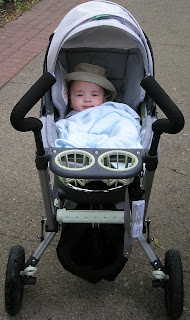 The Spot is my zen master. He does it all while wrapped up like a monk in his sedan chair -- I mean stroller -- while being pushed around the neighborhood, an ageless child-sage. My wife and I have wondered if he might be on the short list for a shot at incarnating the Dali Lama, though his timing is a little off. Why not? The rabbis will tell you that both your child and mine knew the Torah by heart until forgetting it all at birth. That's a lot of reading, so surely a little spiritual virtuosity is not impossible?

Every day, for about an hour or so, we pick a circuit in the neighborhood and head out. Occasionally I bump into my friend Steve down the block, and we caravan for a few blocks before parting ways. That's about as social as strolling gets -- with a few exceptions -- and that's fine with me. We swing wide of the play parks and their fountains like freight traffic getting shunted off onto a business beltway. We'll be in the play parks soon enough. For now, I need my stroller zen.

The Spot more or less goes along. He could just as happily be on his activity mat, yanking on multi-colored giraffe legs or trying to eat the blue monkey. Instead, being the mensch that he is, he lets me get out of the house, and doesn't object when I occasionally call a halt to our perambulation before a passing but sublime moment of urban beauty.

It's hard to find the peace of mind that this brings while sitting in my living room. Strolling with Spot forces me to inhabit the world of the concrete, consisting primarily of the sidewalk in front of us. We judge the size of cracks in the pavement. We gage the slope of the street. We keep an eye on the thunderheads above. With every change in direction, I readjust the awning and carriage to protect Spot from the sun. We dodge sprinklers. If we get caught in a shower, I batten him down. When it's windy, I listen to him laugh while the awning brushes his face.

It's these everyday details of strolling that get me out of my head. And this is where the zen comes in: absorption in the immediate leads to the transcendent. In a way that would be impossible in a car, attention to the simple details of slow travel opens my mind to the occasionally edifying things around us. We could be hiking in Yosemite, or canoeing in Ontario. We just happen to be strolling in Chicago.

In June we strolled through clouds of cottonwood seed, blowing through the neighborhood like a summer snow, collecting against the curbs in small drifts. Out by the Lake we saw the waves roll in on a dry, northerly Canadian breeze. Later, we saw the water lie flat under a soggy dome of Gulf air. On the right block at the right time, the city can feel deserted, the wind in the canopy of oaks above is audible. A flock of green parakeets bobs down the street and flies up through an opening in the trees, and I notice that the sound of internal combustion has, for the moment, disappeared.

I can't imagine taking care of the Spot someplace where it was difficult or unpleasant to do our daily stroll. I know such places exist. They tend to be suburban or exurban areas with no sidewalks and 8-lane roads, or pockets of urban, gang-ridden social pathology. Small towns are perfect for strolling, as are dense urban neighborhoods. Either way, all you really need are halfway decent sidewalks, and some trees for cover against the summer sun and winter winds. Plus a good zen master to help you see things again, but for the first time.
Posted by chicago pop