Axel’s Story: Alone and together 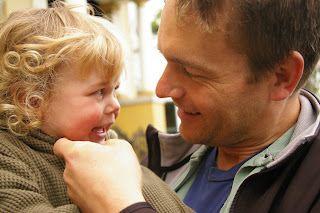 I am in the process of interviewing Bay Area families for a series of writing projects on non-traditional families, collected as the "21st Century Family Project." For the next year or so, I will periodically post sketches of the families based on the interviews, as a kind of public notebook of the work I am doing. What follows is the story of Axel and Lex, who live in San Francisco's Noe Valley. Some names have been changed. (The photo above was taken by Jackie Adams.)

“We’d only been together for two months before Marjorie got pregnant,” says Axel, 37. Until that point, Axel had been working as an actor, with no regular income—but with a child on the way, Axel overhauled his life. “I stopped going out and partying,” he says. “I quit sports. I stopped acting. I got a job again and got an income again.”

At first, says Axel, “it seemed very grand and romantic, having a baby.” But the couple started bickering even before Lex was born, and after the birth they found themselves thrown together in the most intimate, uncomfortable circumstances imaginable. “The first 48 hours after Lex was born was like living on a remote island,” he says. “In hindsight, it would have been better to first build a community as a couple and as parents. I wasn’t comfortable in the relationship. I was happy in Lex’s birth, but I wasn’t comfortable being a dad, I had no idea with what I was doing.”

Their fights grew in frequency and intensity, keeping pace with the couple’s rising anxiety and sleep deprivation. “It was all emotional issues, in my opinion based on the fact that we didn’t get on well together and the situation was largely forced on us…forced on us by ourselves, of course.”

Even before Lex was born, Axel and Marjorie had joined a parenting group, seeking to build a new community as parents. But, while the meetings were enjoyable and provided the basis for individual friendships, the group did not translate into a durable, village-like community. “It seemed like everyone [in the group] was silently hoping for a community, because they hoped for emotional support as well as practical help,” says Axel. “The first year we certainly didn’t get that. Since all the couples were under the same pressure, they didn’t want to hear about it, because they didn’t want to hear anything that would remind them of how fragile their own situation is. I don’t blame them for it. They had no time or emotional energy to give us.”

Over the course of Lex’s first year, the rift between Axel and Marjorie developed into a serious crisis and then one day, just after Lex’s first birthday, Axel left Marjorie. He slept on the couches of his few remaining single, childfree friends, while Lex stayed with his mother. “I felt horrible,” Axel says. “Everything had just fallen apart. But I knew that I couldn’t stay. The only thing that would have been worse was staying.”

During this period, Axel was truly isolated. His friends, even those with children, didn’t understand what he was going through. His entire family lived in Germany. Worse, he immediately lost the small, fragile community he and Marjorie had constructed. “All of a sudden, it looked to me like all these parenting groups we’d joined ceased to exist at all,” he says. Both Marjorie and Axel still received support from individuals, but the group as a whole was not able to shift its "structure and energy" to accomodate the break-up.

“The first five weeks were horrible, but then it got better,” says Axel. Though they were initially enraged at each other, Axel and Marjorie gradually calmed down, “got back in touch with reality,” and ironed out a fifty-fifty custody agreement for Lex, with no lawyers involved.

Now Axel faced a new challenge: learning to be a single, joint-custody dad. “You know, Marjorie had this mama’s group, but there I was, trying to do all this by myself, and I thought, this is insane, so I actually tried to find a father’s group. And it was almost impossible to find. I finally found some people. They were all half-time single fathers, but most of their troubles were surrounding their divorces. I didn’t really feel at home there either. There’s hundreds of mothers’ groups, but almost no groups for dads.”

Axel gave up trying to find a group to join, accepted his isolation, and, for the first time, was able to focus totally on trying to be a good father. Ironically, this acceptance is what allowed him to find a new community. As Lex got bigger, he started playing with other kids and Axel found that it was easier for him to interact with the parents with a clear identity as a single dad. It wasn’t enough for Axel and Lex to do things that seemed best for Lex; Axel had to genuinely enjoy their activities and the company of the parents who were there. Their community grew when father and son found people they could both play with. “I feel much more comfortable being a parent and I’m finding a community that works for me and for Lex,” he says.

Ultimately, he feels, the separation from Marjorie was good for the whole family. “Having this structure and having the relationship with Lex separated from my relationship with Marjorie, it made it easier for me to see myself as a father,” he says. “It made it clear to me and also to Marjorie, that I’m Lex’s dad and I’m going to do all these things that are a part of being Lex’s dad, and it has nothing to do with the relationship, which wasn’t working out. For Lex, it’s better than what he was in before, when we were fighting all the time. It’s really changed my relationship with him and allowed me to focus on being a dad. I can be with him 100 percent.”

A post-script: “Through most of history,” writes family historian Stephanie Coontz, “marriage was only one of many places where people cultivated long-term commitments. Neighbors, family and friends have been equally important sources of emotional and practical support. Today, we expect much more intimacy and support from our partners than in the past, but much less from everyone else. This puts a huge strain on the institution of marriage. When a couple's relationship is strong, a marriage can be more fulfilling than ever. But we often overload marriage by asking our partner to satisfy more needs than any one individual can possibly meet, and if our marriage falters, we have few emotional support systems to fall back on.”
Posted by Jeremy Adam Smith