The Power of Magical Thinking 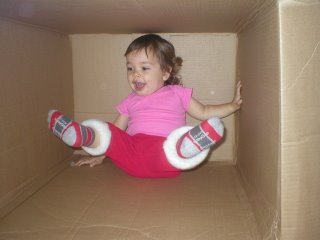 For the first year of my son’s life I was the sole means of support for our family. I worked at an independent media organization that by the time of Liko's birth had turned from a dynamic, innovative nonprofit into a failing business. With others I had fought against that direction, but in the end we were beaten. In dribs and drabs, my allies left.

In the summer of 2005 I joined them, depressed and humiliated by what I saw as a professional failure. I sent out a few desultory resumes, but it didn’t take long for me to realize that what I really wanted to do was spend more time with my son. Unfortunately, my wife’s job would not be enough to support the three of us. I knew that I would freelance and consult, but there were no guarantees. In the middle of anxiously sleepless nights, I envisioned us homeless, forced to live with relatives.

Despite our fears, we made the leap into being a “reverse traditional family.” Like many stay-at-home dads, I didn’t want to stay in the house all day. The minute my wife left for work, I’d take Liko out the door and onto the streets. Together we’d walk, moving from shop to restaurant to playground to bench to friends' living rooms and back to the playground, stepping into the flow of the city.

“Unfortunately, nature is very much a now-you-see-it, now-you-don’t affair,” writes Annie Dillard in her essay “Seeing.” This is equally true of cities. It is also true of parenting. They are worlds unto themselves, containers of consciousness, definers of perception; but we are never quite able to hold them in our senses. During these months of uncertainty, San Francisco seemed to constantly shift in and out of focus, and so did my son. The babble from Liko's mouth sharpened into words, the syllables flashing like sunlight on windows. We'd cross the street and on the other side, he'd seem suddenly older.

During these months of transition I found myself doing a funny thing (“found myself,” meaning that thought followed action; perhaps also meaning that I uncovered an aspect of my personality that I'd never seen before). I'd give away money to anyone who asked for it: five dollars to a beggar, one-hundred-and-fifty dollars to a canvasser for California Peace Action, a dollar to the barista who made my $1.40 espresso. Once I found a ten-dollar bill on the sidewalk; without thinking, I turned and gave it to the man behind me. (“Uh, thanks,” he said, and hustled away, maybe worried that I’d change my mind.) This went on for months, and only began to fade once I felt my freelance work was a going concern and the financial uncertainty had ended.

This week I started full-time at my new job, as managing editor of Greater Good magazine, a publication of the Center for the Development of Peace and Well-Being at UC Berkeley. This morning as I edited an article on homelessness and begging, I recalled the period of my life after I left my job, when I gave away hundreds of dollars to absolute strangers.

Why did I do that? It seems crazy, given the uncertainty we were facing. Though it might seem like I am bragging about my own generosity and martyrdom in writing about this, in fact this is the first time I’ve admitted it to anyone but Liko (who merely gurgled mysteriously whenever I gave away cash). My wife did hear about the donation to Peace Action; at the time she gave me a pained, disappointed look. I mumbled something about wanting to stop the Iraq war, which sounded pathetic even to me. In context, my actions seemed foolish and even self-destructive. I hid them like an alcoholic hides a bottle.

The comparison with alcoholism might be warranted. I was addicted to giving away money, with each donation like a hit of some drug that alleviated my burdens. In the instant I handed over the money, my anxiety over money vanished. I felt floating, free, above it all. Of course, in a minute I’d fall back to earth, but that just caused me to want another hit.

Obviously I was not motivated by spiritual love for humankind, though certainly such moments have come up to me from behind, scaring me half out of my wits with their imperious demands that I change my life. I told myself at times that I was just looking for good karma; on a semi-conscious level, I believed that by helping others, it would somehow make people more inclined to help my family and me. I felt that the world was accumulating some kind of debt to me, quite without its consent, and that when I needed it, I could go to the world and ask to be repaid.

(In the article I edited this morning, the author paraphrases and quotes Søren Kierkegaard: “Sure, he said, we think a person who is loved owes a debt of gratitude to the one who loves them. There is an expectation that it should be repaid in kind, on installment, ‘reminiscent,’ [Kierkegaard] says sarcastically, “of an actual bookkeeping arrangement.’ Instead, [Kierkegaard] turns the whole thing on its head: ‘No, the one who loves runs the debt; in feeling himself gripped by love, he feels this as being in an infinite debt. Amazing!’” Kierkegaard was never a parent, but he seems to have understood parenthood well enough.)

There’s a phrase for this: magical thinking. Maybe the magic worked. I got plenty of work as a freelancer and consultant, more than I could handle given my responsibilities as a dad. When I found out about the position at Greater Good, at first I didn’t even consider applying. I was happy having so much time with Liko, making my own hours and doing work I wanted to do. Why mess with success?

Though it fell upon me almost by accident, being a stay-at-home dad irrevocably changed by interests and direction – it might not be an exaggeration to say that it changed the very core of my being, whatever that is. But I picked up a copy of Greater Good and thought about its mission – to “highlight ground breaking scientific research into the roots of compassion and altruism” – in relation to my life and my writing, in which I had increasingly turned my attention to parenting and kids. I met with the staff, and they told me about how they were researching the childhood roots of adult happiness, trying to figure out how to foster pro-social emotions and behaviors, and challenging, on scientific grounds, worldviews that depict human nature as primarily sinful, dark, and violent.

At the same time, I heard about another job at Stanford; this time the attraction was a heap of money. I applied for both and both were offered to me. In the end I don’t think that I had any choice. The mission of Greater Good vastly outweighed the salary at Stanford. Once again, I gave away money, hopefully to someone who needed it more than we do. Once again disappointments and fears dissolved, and I felt some degree of freedom.

So here I am. I go to work in the morning and come home in the evening. Shelly stays home and takes care of Liko. We’re a traditional family again, though we don’t think of ourselves that way. A year ago it seemed like life had kicked me in the stomach; in fact it had given me a gift. For that I’m grateful.
Posted by Jeremy Adam Smith

Jeremy, an amazing post, so many of us move in and out of different life rhythms. I do believe in the magic of everyday life, and I know it takes courage in this world to walk away from money. Thanks for composing this ode to magical thinking.

Good luck in the new job (and you will keep up the blog, right? pretty please?)

Miriam: sorry I didn't respond right away to this. Thanks for you kind words.

We'll be keeping up Daddy Dialectic, although I suspect the focus will shift a bit to broader family politics; it'll also start including more thoughts on new scientific research into families and parenting, which comes across my desk every day.

A wonderful post with excellent writing. I don't think there's anything odd about giving money away like that. When you can give it away you'll never run the risk of caring too much for it. Good luck on the new job, sounds like it's the perfect combination you're looking for.

There is so much to be said for the power of thought - - more than I understand to be sure. I love reading about life "facelift" experiences. Thanks for sharing and congrats on your new job!

Congratulations on the new job! I think you're very brave to do what you did. I don't know if I could!

Here via Carnival of Family Life.

It's amazing that sometimes our comforts have to be stripped away for us to truly see. Great post! here from the CFL.