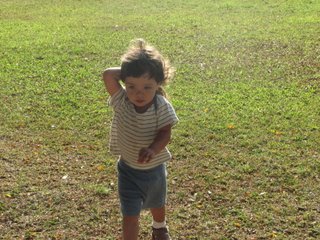 I've blogged before about Bevan Dufty, my representative on the San Francisco Board of Supervisors. Bevan got together (in vitro!) with lesbian friend Rebecca Goldfader to have a baby, who was born two weeks ago and dubbed Sidney.

Talk-radio host Pete Wilson rushed to the defense of the traditional family:

The Dufty-Goldfader baby is, in my mind, a travesty... I do not now nor have I ever accepted the idea that a baby is a toy, that it is a social science project or a possession. A baby is a human being, a delicate thing, our past, present and future. It is not an experiment. It is not an opportunity to see how far you can carry your views on parenting, alternative lifestyles or diversity in family structures.

It is raw, bleeding prejudice that drives Wilson to attack two-week-old Sidney as "a travesty," and it doesn't take much of a leap to connect Wilson's comments to attacks on stay-at-home dads, working and single moms, and anyone else who doesn't fit the version of the family that conservatives pass off as immutable. (In fact, historians date the nuclear family as starting sometime in the mid-19th century, coinciding with the move from agricultural to industrial society.)

So much for stating the obvious. It's much more interesting to think about the impact of the birth on the upcoming District 8 election, in which Dufty is facing off against two opponents who are positioning themselves as culturally, though not politically, to his left. I don't need a poll to know how my neighbors are going to react: now that he and his family have been attacked, we'll circle our wagons around them. Queer and non-traditional families are simply too widespread in the Castro and Noe Valley; residents will take Wilson's comments as an assault on the identity of the district.

I've stopped making predictions about elections, since I'm usually wrong, but in this case I'll make an exception: Dufty was going to win anyway, but as a result of this incident, Dufty will win in a landslide.

Speaking of San Francisco exceptionalism, I recently discovered the Left in SF blog, which has an amusing post on Bill O’Reilly's latest attack on San Francisco. Also, Jason at Daddy in a Strange Land pointed me to the new Anti-Racist Parent blog, which seems promising. Check it out.
Posted by Jeremy Adam Smith

Hello. FYI, we’ve blogged about the Pete Wilson “controversy” on RightLinx and mentioned your blog in the process. Your comments are welcome even though we may not agree.

Hello. FYI, we’ve blogged about the Pete Wilson controversy on RightLinx and mentioned your blog in the process. Your comments are welcome even though we may not agree.

I must say, anonymous, that it's interesting to see conservatives get so thin-skinned, to the point where even the mildest criticism is denounced as a threat to their free speech. (I'm referring to the content of your post.) Accusing liberals and progressives of intolerance probably plays well to the ideological base, but for the everyone else it sounds, at best, like crying wolf; at worst, it looks hypocritical and even deceptive. Its intended effect is to stifle , not cultivate, conversations that we need to be having.

I think that you'll find liberals and progressives becoming increasingly aggressive in their criticism of right-wing ideas and policies. The conservative movement scored some points and made some gains, but it's overplayed its hand, taking a precarious margin as a mandate for revolution. A rebuke is coming; try to face it with some degree of dignity.