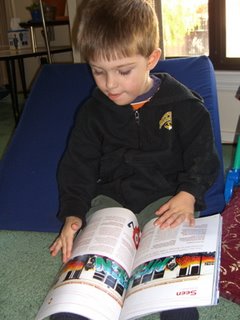 Cole has always been nuts about books. He's not quite 4, but already he's begging to keep the lights on at night so he can look at "just one more book." He can't really read yet, but he likes looking at the pictures, sometimes narrating the story to himself as he flips the pages.

The teachers at his preschool close the day with story time, and if they are in the middle of one story when I arrive to pick him up, Cole will barely acknowledge my presence until that last page is turned. Any attempt to interrupt will be met with emphatic protestation. The funny thing is, he doesn't like any of the songs or finger plays or clapping games that people tend to intermix into storytime. He just wants the stories, and couldn't care less about any of that other stuff.

One thing I would have never even thought to look for are audiobooks, but my friend Annalee passed along one of Mary Pope Osborne's Magic Treehouse CDs, and Cole was mesmerized by it. He picked out several more stories from the series at the library, and will sometimes sit for more than an hour listening to them. This interest in stories and storytelling is one childhood habit I hope he keeps.

When I took him back too his preschool last week, I saw some of the new parents struggling with sobbing, clingy kids who didn't want them to leave. I was reminded of Cole at this time last year, when most every school drop off was concluded in tears. Often the teachers would have to pull him off of me so I could get to work. It's such a contrast with how he is now, racing into school, taking off his own shoes and jacket, and having to be reminded to give me a hug and a kiss before he zooms off to his friends. The changes sure do come, don't they?
Posted by Christopher Pepper

Ian didn't have any problems with separation anxiety, but it was hard getting him to play with other kids at first. He's an only child, and didn't have much social interaction apart from his immediate family.

It's so neat to see him finally trying to play with other kids, and actually being aggressive about it. Before he'd make subtle attempts at getting kids' attention, but that doesn't really work until you're, what, 40?

We had a horrifically crappy morning dropping Liko off at preschool this morning. He cried and cried. Afterward I felt sick to my stomach and weak in the knees. I'm a wuss. When Shelly picked him up that afternoon he seemed only slightly weepy reading the Very Hungry Caterpillar.

AWE! Max is almost two but when I think about dropping him off at school and him crying to come home with me just the thought alone makes me tear up. it’s good to read someone talking about how it does get better.

And, wow! That is awesome that Cole is so into books! I looooove hearing that kids love books. He probably gets that from you! It sounds like you read A LOT.

You know, I didn't dwell on this specifically in my post on Melinda Duckett, but in reviewing what folks had to say about Grace's ethics and Duckett's suicide, it really struck me how word-based media (newspapers and blogs) had thoughtful, critical things to say - and how fucking stupid the TV people sounded. I also hope Cole keeps his interest in stories and storytelling, and he keeps on reading.

Hmmm. My post and this post also really relate to what Tom had to say in the previous post, about the power of stories and storytelling. Curious.