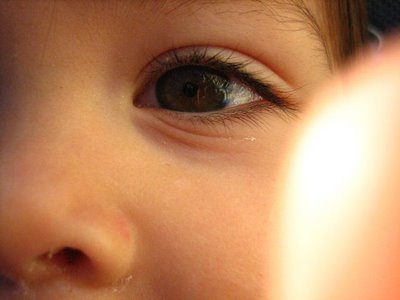 Liko sleeps in bed with us. Last week we started to night-wean him, so that he would not nurse all night on Shelly. She now sleeps in the living room; Liko and I sleep in the bedroom. We’ll continue this arrangement until Liko no longer tries to nurse at night.

It’s going fine. Last night as I watched him sleep, feeling like the bed was a raft and we were just drifting along a dark river, I felt something change within me. It’s difficult to communicate. I’ll try.

In the early months – the fabled fourth trimester – Liko needed Shelly and in my ignorance and inexperience, I was largely a supportive bystander. I could not imagine putting him down to sleep without mom; I couldn’t imagine caring for him all by myself, as a father. This bred a certain helplessness – common to first-time fathers – on my part.

Last night he curled up into the crook of my arm. I held him, feeling his little back rise and fall. I felt totally responsible for Liko and totally capable of caring for him, day or night. That feeling of responsibility and capability gave me a concomitant feeling of confidence and power – not “power” in the sense of physical force or strength, but as in the ability to do what has to be done.

“Parent” did not feel like a role that I was adopting, but like something intrinsic to my identity. It didn’t feel “like” anything, really; it was its own thing, my thing, like my arms or my legs. Today I feel somehow more free than I have felt in two years.

Before Liko, I remember watching parents with young children: I’d see the whining, the screaming, the messes, the rising frustration. I’d think: no, no, not me, never. Parenthood looks horrible. They must be miserable. After Shelly got pregnant, I walked the streets of San Francisco with a feeling of doom, imagining - correctly - that I wouldn't be able to go there or do that after the baby came. "The baby" was a very abstract concept.

I am writing this entry in the café of the San Francisco Main Public Library. A short time ago a young man, mid-20s, sat down next to me with another young man, who suffers from some degenerative nervous disorder. They are strangers to me, but I have seen them both around the Mission many times, one caring from the other. I don’t know anything about their relationship – brothers, friends? I know that they both dress like Mission hipsters, in high-tops and thrift-store jackets, the kind of conformist alterna-dress you see shoulder-to-shoulder at a Yo La Tengo concert. Over the years I’ve watched the sick one grow more palsied, more bent upon himself, less recognizable. I don’t know anything about his illness, but I cannot imagine him surviving too many more years.

For the past fifteen minutes I covertly watched one hold a drink up to the other’s mouth. I watched him wipe the other’s chin, force the other’s hands into a position that would allow him to eat, spoon food. A palsied hand knocked milk onto a shirt, the floor. One patiently cleaned it up. At the end one had a small seizure; the other dealt with it.

They just left, one guiding the other at the elbow. Watching them oppressed and saddened me; my hands feel heavy as I write. I’m trying to understand why. Perhaps I was seeing myself as I might appear with Liko to other people: burdened by responsibility, trapped in caring for another, covered in spit and milk. That’s the external image. Internally, how do the two young men feel? There must be anger, both at thwarted lives. But what freedom and power is there, where we can’t see it?
Posted by Jeremy Adam Smith

Perhaps it was in seeing a dependancy that wont be outgrown.

That's an interesting insight. Definitely one part of the picture.

I think Helen is right. With our kids, we know even subconsciously that they will keep changing, and that we won't have them dependent on us (in the same ways anyway) forever.

But you make a great point. What we get out of our relationships is not always obvious to casual observers. Your pre-kid observations are right on in that regard.