Seesaws, rocking horses, and merry-go-rounds can be lots of fun for children. But playground chess with your father-in-law is serious business. 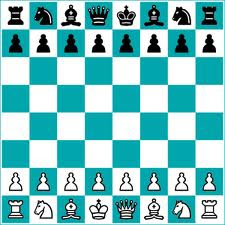 At a playground in a Vacaville mall, my father-in-law Barry and I played chess with pieces the size of toddlers. Five of us were on our way back to San Francisco from Tahoe, and after four days of in-laws and three hours in the car with fourteen-month-old Sam, it was time for a break. Following six inches of snow in the mountains, the sunshine was welcome on the checkered board, but there was a chill in the air, as Barry plotted black and white revenge for a slushball in the ear.

Surrounded by wooden rocking horses and noisy children, Barry huffed and puffed around the oversized board, while I coolly repelled his black queen with white pawns. After ten moves his queen looked spent. I rocked back on my heels, surveyed Vacaville’s spacious and navigable Nut Tree Mall, and wondered whether to celebrate the victory by visiting the Gap or New Balance. His queen was pinned between my rook and his king. It looked all over. He shoveled a bishop in the middle, but I advanced another white pawn and pinned that too. I was just musing whether a quick or elegant finish would be more fitting for super-competitive Barry, when I realized that his queen and rook were lined up to checkmate me.

The sun seemed brighter, and I squinted hard at the board. Losing to my father-in-law was not an option. I wouldn’t hear the end of it in thirty years. In the distance, children looked faceless as they played on a steel seesaw. I could sacrifice a rook, but that wouldn’t shift the queen. Then my wife, Fitzsimmons, walked up.

I retracted my queen, blocking black’s threat and threatening a queen swap. Barry backed off, but the danger was still there, so I pushed the white queen forward again. What just happened? Two moves ago, he was dead meat, now it was me on the rack.

“Have you got him?” asked Fitzsimmons.

Even if Barry traded queens, I’d still be ahead. Nothing to worry about. I posted Sam between my legs and pointed to the white knight.

The knight looked like the seahorse in his Fabulous Fishes book, the same curved neck with the sculpted markings. But it was still parked in its starting position, like an undriven Ferrari. As my baby Bobby Fischer toddled away to play with the oversized checkers set behind us, I took Barry’s queen with mine.

He took my queen with his rook, then I snaffled a bishop with my pinning pawn. Ten minutes of tension, then thirty seconds of bloodbath.

“Now what do I do?” he said, and he pushed forward a rueful pawn.

This was what I’d been waiting for. With no queens, it would be just the guys, king on king. And while my rook controlled the center of the board, his king was out in the open, exposed. Then I turned round and realized Sam was gone.

My eyes whirled round the playground. Hundred yards long. Forty yards wide. Fences with gaps. Quarter of a mile away, the thunder of the freeway. I could feel the blood pulsing behind my eyes, the heat rising in my temples. What had Sam been wearing? I couldn’t remember.

I spun around. The nearest exit was only twenty-five yards away. How long had he been gone? How long had I been thinking about beating my father-in-law? How long had I failed to notice my son’s absence? This was the kind of thing that happened to other people. Should I find a security guard? Tell an employee? Call 911? What would I say? “His name’s Sam. He’s old enough to walk, but not to run. Blue eyes, light brown hair, fat cheeks. Waves a lot.”

I strode away from the chessboard towards the center of the playground. I didn’t know what to do, I just wanted to make sure I could see everything. The mall was designed for entrances and exits. Not escapes.

It felt like a movie. The scene where the parent turns hysterical and starts shouting for their kid. Did Sam even know his name? Yelling would frighten everyone. But would it stop someone snatching him? His walking had really progressed over the last month. Could he have got onto the road? How fast does a car need to drive to kill a fourteen-month-old boy? My mouth tasted of metal.

Then, at the end of the playground, between the fence and the golden carousel, I saw him. Walking unsteadily, his hand held by the young woman in charge of the carousel. She smiled at me, blamelessly, as if it was she who should be grateful for the chance to spend time with Sam. He was smiling–he always smiles at strangers. He looked up at me and grinned. I picked him up and felt his weight on my chest, his cheek against mine, and my heart beating like a blacksmith’s anvil.

Later, we will leave Vacaville, leaving behind the carousel, the playground, and the chessboard. Leaving behind a toddler-sized king penned by his own pieces into a corner and checkmated by the white knight. The car will feel quiet on the ride home to San Francisco. As we cross the marshes south of Napa, the sky will seem immense and I will wonder at how close I came to losing. After we unpack the car, I will try to recall the face of the carousel girl, and my eyes will fill with tears as I remember only her green baseball cap and red apron.

By the golden carousel, I picked up Sam and walked back to the checkered board, carrying him over my shoulder and rubbing his back.

“Is he alright?” said Barry, reaching through fear for calm.

Glad I got to this...the first chess piece on Daddy Dialectic. I liked it. A bit of a scare at the end...puts competition with Barry in perspective, no?

I'm a first time blogger, (3 under my belt), long time chess player, Bay Area resident and new father. Thank you for this blog post, it feels like it was written for me. Inspiring.

Thank you for this blog post. 1st time blogger, Bay Area resident, long time chess player and new father. It feels like it was written for me. Thank you for the inspiration!