A Playdate with Ernest Hemingway 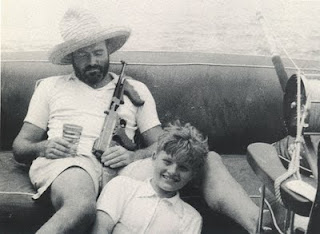 I've never read Hemingway but this was very good and I'm sure it's on the button. I look forward to more in the series!

Holy shit, you're on a tear! This was brilliant!

Jane Austen - I like that idea. She may be next in the series, unless Nicole beats me to it.

This is great! Chicago Pop's Papa is tops. Maybe you guys would appreciate this: A little while ago I tried my hand at Nora Roberts,
http://affirmativeactiondad.com/essay-archives/heather-park.html

I have one for Charles Bukowski ready to go, but I can't get it past the censors.

Affirmative Action Dad, those are hilarious. Are we seeing the birth of a new genre? The stay-at-home dad literary pastiche?

May I make an appeal? Can anyone do Keith Richards giving a commencement address? _In writing_ Sure, even those pikers at SNL could do a vocal imitation (maybe they have; I haven't been up that late since the Clinton administration). But in writing? I've been trying, but how do you spell -insert whiskey chortle-? Maybe this is the literary equivalent of squaring the circle, but I gotta believe somebody can do it...

I particularly liked the Nora Roberts spoof, because my wife also reads that stuff. You could also have titled it "Taboo Playground". We may have to have a Nora Roberts farce-off.

I think Jeremy's on to something with this new genre idea.

You've seen one Hyde Parker you've seen 'em all. I was an undergrad at U of C. My wife says that explains pretty much everything - everything except my good taste in wives. Taboo Playground...isn't that a club on Belmont?