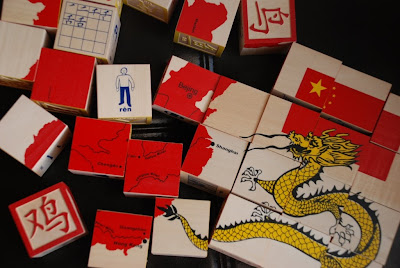 Our family is about to expand. We are expecting a daughter, sometime in the middle of 2011. We can't provide a due date, because she is already alive, and when she was born, we were unaware of the event. But already, multiple lines of fate are converging across continents and oceans, the result of decisions made by dozens of people, many of whom we don't know. As a result, our family of three, and one orphaned Chinese girl, are falling like small steel bearings through a vertical maze, channeled through the chutes and tunnels of international bureaucracies, until we will come to rest this summer, blinking in silence and side by side, in a single room somewhere in China.

Whether it speaks to the strength or poverty of my imagination that I can envision the event as if it has already happened, I can't say. A fictional version of the first encounter plays itself automatically, over and over, on some inner screen of my thoughts. There were no such trailers running before my wedding, or even Junior's first day in the world. But these coming events I see quite concretely: There is banter in Mandarin between my Chinese father in law and the orphanage attendant. Junior's aunt, who is a physician, holds the little girl's medical paperwork in her lap, and silently observes the conditions of the facility. Junior, who will by then be half-way between 4 and 5, is hiding behind mama's leg, because he is shy, because he is tired from trans-Pacific travel, and perhaps because he is overwhelmed to be surrounded by people who look more like mama than daddy, and who talk like Grandpa talks, but all the time.

A little girl is brought in, around two years old, abandoned somewhere in the province by parents we will never meet. Their lives are blank spaces that will be filled with every newspaper story we will ever read about the rural upheaval, economic struggle, and domestic drama of modern China. Junior will sense how quickly and completely the adults have turned their attention toward this little girl, and will emerge from behind mama's leg. After fifteen or twenty minutes, he will attempt to communicate, maybe tease or jest with a smile. He'll speak in English at first -- although he can speak Mandarin -- because he thinks of himself as "an English person." He will see that this very important person, his mei mei, makes no response. The curious second language that lies scattered inside his head as casually as the troupe of stuffed animals that live among his blankets, will suddenly become instrumental and self-conscious as the most important bridge to his sister. And he will display all the shades of generous openness and shy retreat that we have seen with his friends, the same demanding claims on mama's attention, and the same mimicry of daddy's own first gestures of welcome and care for this new family member.

This is the point at which the film begins to stutter, and I am momentarily blinded by the whiteness of a blank screen, as the movie reel flaps in a slowing tempo of completion in the projection room. Antique metaphors for an antique man, whose imagination is here outstripped, and left flapping on its own spool.

Who will this child be? With what disposition will she greet the world? What will be the genetic projection of all the untold accidents and couplings of her anonymous pedigree? What will develop between this child and her new mother, who longs for a daughter with an intensity that still partially bewilders me? And what is in store for this father, who has grown into fatherhood with the comfortable familiarity of a man who can find the time of his own lost boyhood by watching Junior discover his own? How will being the father of a girl change the way he thinks of himself as a dad, and as a man? The cast of characters is about to expand, the narrative is set to grow in dynamism and complexity, and my skills as the chronicler of it all will need to be significantly upgraded, from the level of a neighborhood gossip columnist, to that of a Jane Austen or a Russian novelist, or perhaps the two of them combined.
Posted by chicago pop

Beautiful. Adopting is a dream of mine too. Thank you for sharing! And good luck to you and your family. May that precious little girl find her way to you soon.

Beautiful story. And I hope it goes very smoothly for you all. Will be an incredible journey.

How exciting! Not to mention beautifully rendered. I can't wait to hear the tales of how it actually turns out.

What a rich, beautiful post. I am delighted to have found your blog.

Thank you for sharing your experience; this is a lovely reflection. My wife and I are currently on a waiting list to adopt from India. Hopefully 2011 is a magical year for us, too. I have likewise imagined many moments that have yet to happen. It is so wonderful to feel like we are all evolving together, as sons and daughters, and as dads and moms.